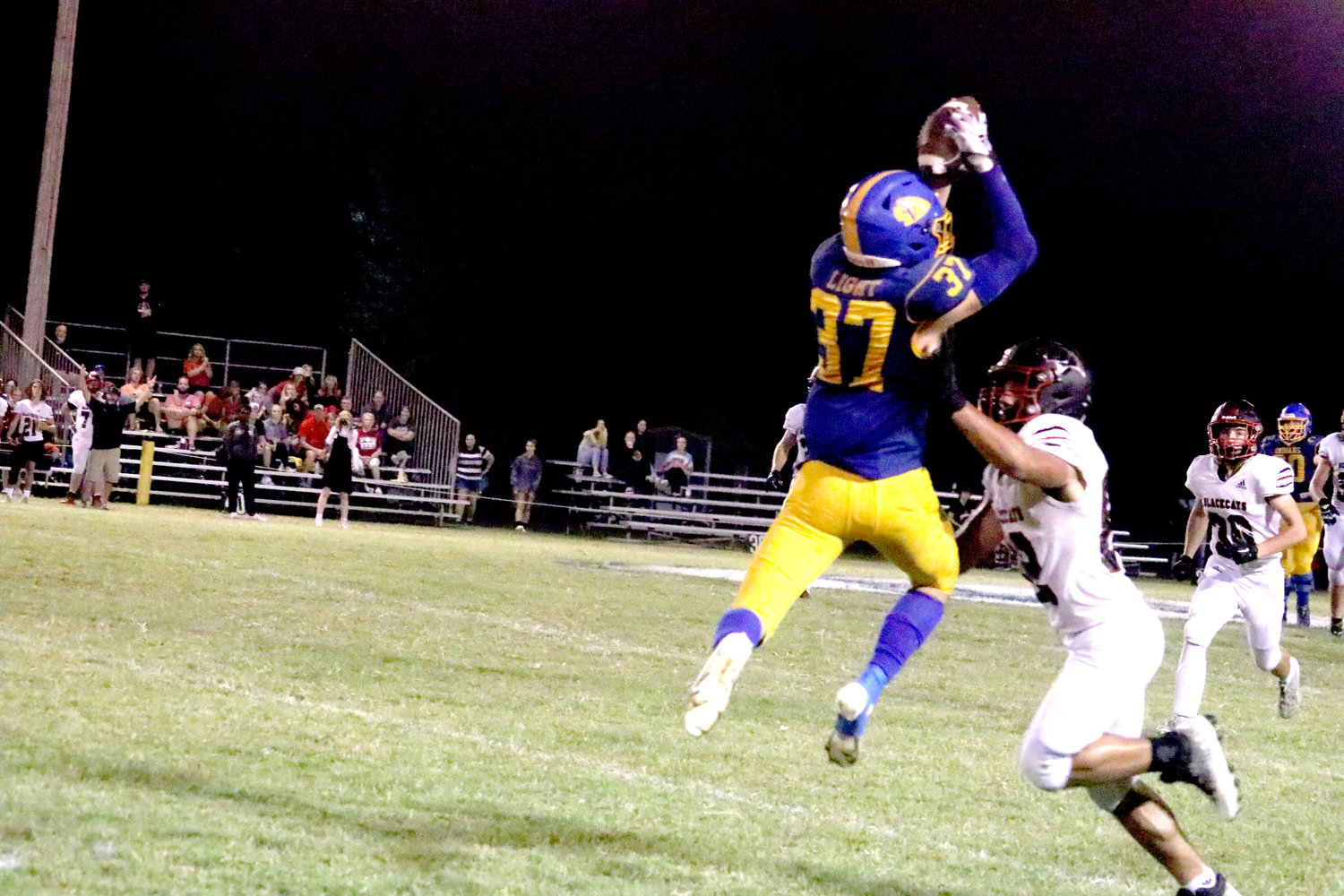 It looked like St. Vincent would run away from Herculaneum, but the Blackcats hung around and nearly stole a victory from the Indians.
St. Vincent sophomore Cruz Reitzel made a tackle with 10 seconds left and the Blackcats failed to get off another play as St. Vincent edged Herculaneum 19-16 at St. Vincent Stadium Sept. 16.
The Indians improve to 4-0 on the season, which is the program’s best start since 2000.
“It was a crazy game,” St. Vincent football coach Tim Schumer said. “I thought we played a good first half and had some chances in the second half to bust it open. Herculaneum is a gusty team and we knew that if we let them hang around they would give themselves a chance at the end.”
For a game that looked good on paper with both teams coming in with identical 3-0 records, it certainly didn’t look like it would be much of a competitive game.
Mason Light picked up the offense that made it inside the redzone on the opening drive of the game before failing on fourth down as he picked off a pass for a touchdown to give St. Vincent a 6-0 lead with one minute left in the first quarter.
That momentum carried into the second quarter as Kaden Kassel hauled in a 50-yard touchdown and quarterback Christian Schaaf scrambled for a 26-yard score to give St. Vincent a 19-0 lead with 5:18 to go in the first half. Schaaf was 16-25 through the air for 229 yards and one touchdown, and one interception. Trevor Moonier led the way with four catches for 64 yards, while Kassel had three catches for 59 yards and one score. Herculaneum styimed the St. Vincent rushing attack for 60 yards on 19 carries.
“Guys stepped up in the first half to get us a lead,” Schumer said. ”We need those types of plays and guys to do that to give us a chance to win every week. We just have to play a full four quarters offensively.”
Herculaneum planted the seeds for a comeback when Lucas Bahr took a swing pass and scored from 44-yards out. The Blackcats converted the two-point conversion as St. Vincent went into halftime up 19-8.


In a seemingly rare occurrence in Schumer’s tenure as coach against comparable opponents, St. Vincent went scoreless in the second half, so it was the defense that had to step up. St. Vincent forced a fumble on Herculaneum’s opening drive that was recovered by Clayton Gremaud.
The Blackcats forced St. Vincent into a turnover on the ensuing drives as both teams traded field position until the Blackcats finally got the big play they were looking for.
Bahr took a screen pass 98 yards to the endzone and converted the two point conversion to narrow the deficit to 19-16 with less than one minute to go in the third quarter.
From there the St. Vincent defense stood strong.
Herculaneum had three separate drives in the final quarter, but none produced points, despite the Blackcats best efforts. The Blackcats got the ball at the 15 yard line with just over three minutes left in the game and drove the field. The Blackcats dropped a long pass with 90 seconds left and were aided by the defensive pass interference that put the ball just in the redzone with 24 seconds remaining, when Reitzel made the game saving tackle.
“When you get tackled inbounds with 10 seconds left you have to have a play in mind and be ready to go,” Schumer said. “We were able to keep them in front of us and bent, but didn’t break on that last drive. Our defense is a resilient bunch. If we keep this up we can stay in a lot of ball games down the stretch.”
That defense will be tested when St. Vincent travels to Valle Catholic Friday. The Warriors (4-0) defeated Potosi 68-13 last week and have scored at least 48 points in every game this season, winning by an average of 42 points per game.
Schumer is excited for the challenge.
“We play the game for a reason and we kept them on the schedule because they are a quality team that can get us ready for postseason play,” Schumer said. “We can’t let outside noise get into our head going into the game. We are going to put 11 guys out there and see what happens.”