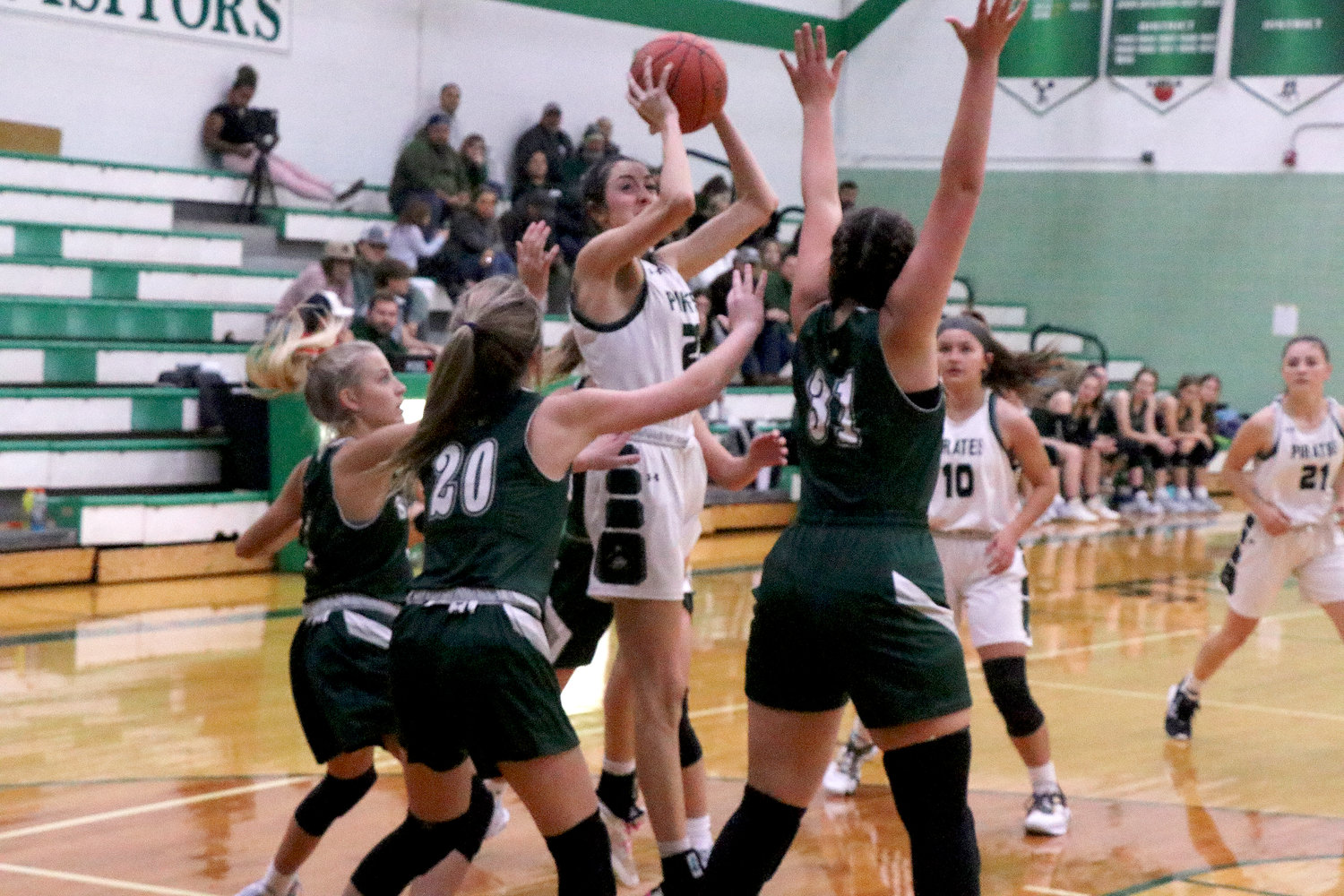 Fans of the Perryville girls basketball team got a sneak peek at how the players looked out on the court for the first time this winter as they competed in a four team jamboree Nov. 16
First year head coach Jason Dreyer wasn’t too concerned that his team won each of the five “quarters” it played against Valle Catholic, Ste. Genevieve, and Notre Dame-St. Louis.
He was more worried about how his team performed and executed the things they worked on in practice.
“Our offense isn’t where it needs to be, but I was more concerned with how our defense looked and if we were in the right spots,” Dreyer said. “I thought for the most part we were tonight.”
The offense was on point as Perryville outscored its three opponents 54-27 in 30 minutes of game action, but the Pirates allowed zero points in two of the quarters (one against Valle and one against Ste. Genevieve) which Dreyer thought was a good sign.
“We want to keep people out of the paint and make them shoot shots from the outside and then go get the rebound,” Dreyer said. “Last year I thought we gave up a ton of offensive rebounds and we have been stressing finishing the possession with the defensive rebound.”
Dreyer noted that with just one girl with “length” in the post, rebounding will be a focus each and every game.
“We are going to work extra hard to secure that rebound,” Dreyer said. “A majority of the teams we will play will be taller than us.”


Perryville will boast a lot of experience on the court with five seniors on the roster, but just eight players on the varsity level all together. Which is why the defensive end will be just that more important.
“We have been preaching about playing defense by not letting them get in the paint, but also playing defense without fouling,” Dreyer said. “We have just three players on the bench, so we can’t afford to get into foul trouble. We also have to be able to stay fresh out there so all eight girls are going to have to contribute. But we have stressed not reaching and not picking up dumb fouls.”
Offensively, Dreyer thought they looked good at times, but also that there is a lot of room for improvement. Dreyer also stressed not shooting as many threes as the team did last year, although Carlie Holdman made a pair as well as Kyla Schnurbusch.
“We really didn’t run an offense against zone or a man-to-man defense tonight,” Dreyer said. “There’s room for improvement there, but we want to drive and use our athleticism to get points. We do have girls who can make three-pointers, but we don’t want to rely on that as much as we have in the past.”
Dreyer will take over for Angela Fulton this winter after spending time as an assistant one year ago.
“I’m really looking forward to the season because we have a great group of girls,” Dreyer said. “I think we can learn something from every game and use that to get better so that we are at our best at the end of the season.”
Perryville went 17-8 last season and won the Jefferson County Athletic Association Large-School Conference for the third straight year. Dreyer noted that it is once again a goal to win the JCAA.
“I feel that we should be one of the top teams again this year, however, it will be harder,” Dreyer said. “Our goal every day is to get better.”