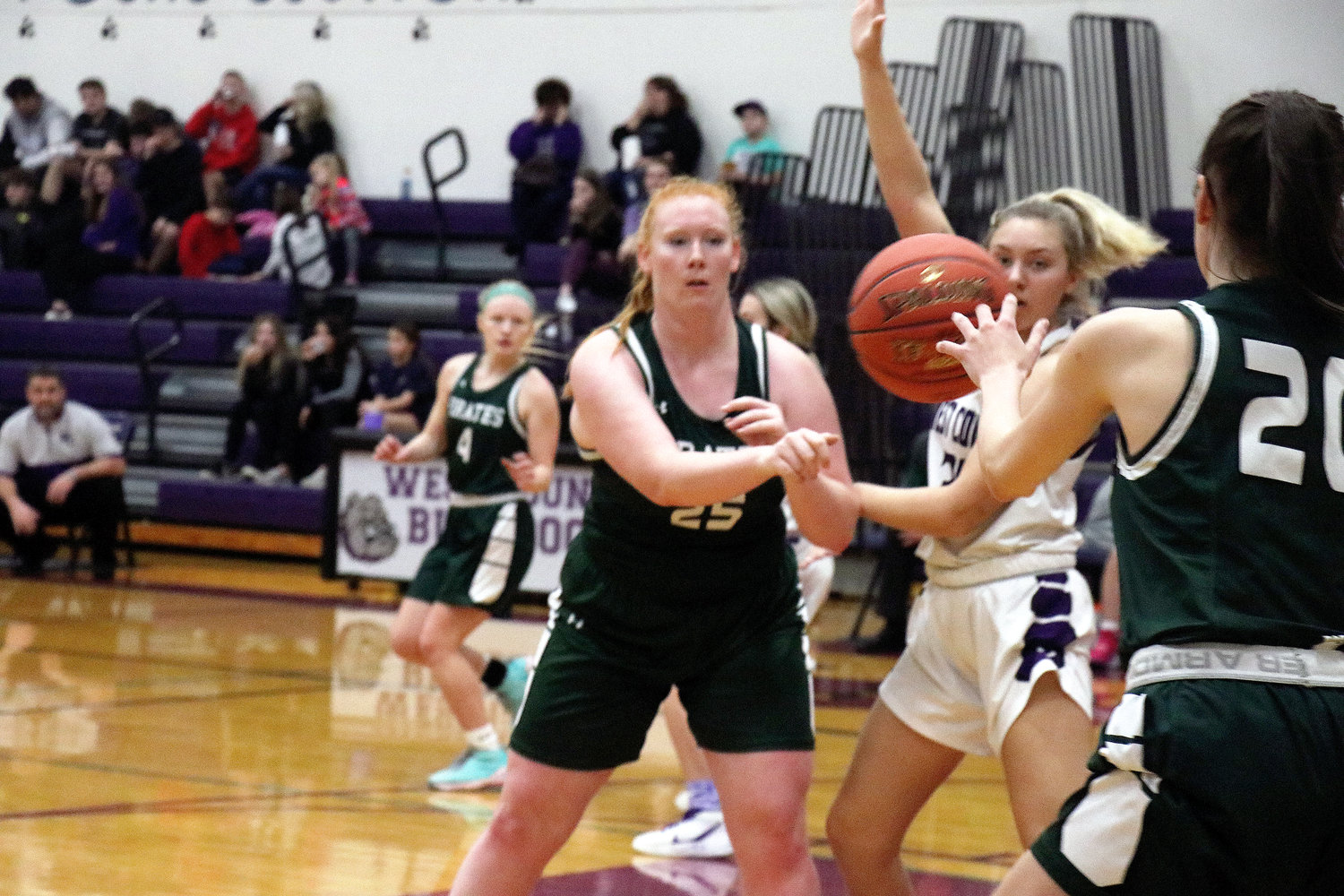 Perryville girls basketball coach Angela Fulton has had the same feeling every year after facing West County around the holiday season. It’s one that she doesn’t particularly enjoy.
Perryville’s offense stumbled after the first quarter as they fell 47-25 to West County in the championship game of the third annual FSCB Christmas Tournament Dec. 30.
It was the third straight holiday tournament title for the Bulldogs, all of which have come at the expense of the Pirates. It was also the lowest point total for the hosts in the three games in the tournament championship. However, Perryville was not able to take advantage.
“It seems like we are in the same spot every year and every year it’s not a good outcome for us,” Fulton said.
It certainly didn’t look like the game would end up being so one-sided in the first quarter, as Ciara Ehlers drained the first, and ultimately only, 3-pointer of the game for Perryville, to put the Pirates ahead 7-5 midway through the first quarter. Brooklyn Moll added a field on the next possession to widen the lead to 9-5.
However, West County ended the quarter on an 8-1 run after Perryville center Aubrey Jung picked up two fouls in the opening quarter to lead 13-10 after the first eight minutes. Fulton felt like her team was still in a good spot after the opening quarter, but the inconsistency on offense was the undoing for Perryville.
Perryville struggled to finish quality chances in the paint, and rarely developed open look for guards Kyla Schnurbusch and Ehlers along the perimeter. Schnurbusch finished with a team-high eight points, with half of those coming with the game already decided.
Jung had six points and seven rebounds for Perryville, but was limited in the first half with foul trouble.
“We really didn’t get into an offense,” Fulton said. “West County came out and was physical from the tip and we cracked on that. It really hurt us in the end. With us being so spastic it hurts us. If we can keep our composure and run an offense, then I feel like we are unstoppable. Unfortunately, we didn’t do that tonight.”
Bailey Skiles, who scored nine of her game-high 11 points prior to intermission, capped a 7-0 West County run to begin the second quarter as the Bulldogs widened their lead to double digits at 20-10 with 5:52 left before halftime. Aubrey Jung stopped the run with a two-point basket, and Rachel Riney added a long two-point jumper to narrow the Perryville deficit to 20-14 with nearly four minutes to go before the end of the quarter.
That was as close as Perryville would get as West County led 24-16 at the half.
The Lady Bulldogs began the second half with seven consecutive defensive stops, and were in no hurry to force shots while steadily pulling away, bleeding the clock
They followed a four-minute stretch of shutout defense with nearly six minutes of shutdown defense after that in the fourth quarter, and surrendered one made field goal over an eventual 23-5 scoring run. In all. Perryville made seven field goals in the game and had just nine total points in the second half.
“West County’s plan was to get it inside and be physical and we didn’t handle that well in the second half,” Fulton said. “We were out of control and the result is what it is, when you do that.”
Perryville (5-5) will play at De Soto on Jan. 6.

Ciara Ehlers and Rachel Riney were the Perryville representatives for the All-Tournament team. Riney had a pair of double-digit scoring games in the tournament, while Ehlers led the team in scoring in Perryville’s victory over Bismarck in the quarterfinals.

Rachel Riney led the way with 17 points as Perryville hung on to defeat third-seed Valle Catholic in the semifinal round Dec. 29. The Pirates held an 11-point lead going into the fourth quarter and the Warriors cut the lead to just two possessions on several occasions. The win avenged a Perryville loss to Valle Catholic just nine days earlier. Kyla Schnurbusch added nine points for Perryville, while Mia Weiler scored 14 points to lead Valle Catholic who went on to claim third place over Kingston the next day.

The Pirates exploded for their highest offensive output of the season in the quarterfinals. Ciara Ehlers had 19 points to lead all Perryville scorers, including a trio of three-pointers, as the Pirates had four players in double figures. Brooklyn Moll had 14 points, while Rachel Riney and Aubrey Jung both chipped in 10 points each. Perryville scored 62 points in the final three quarters.