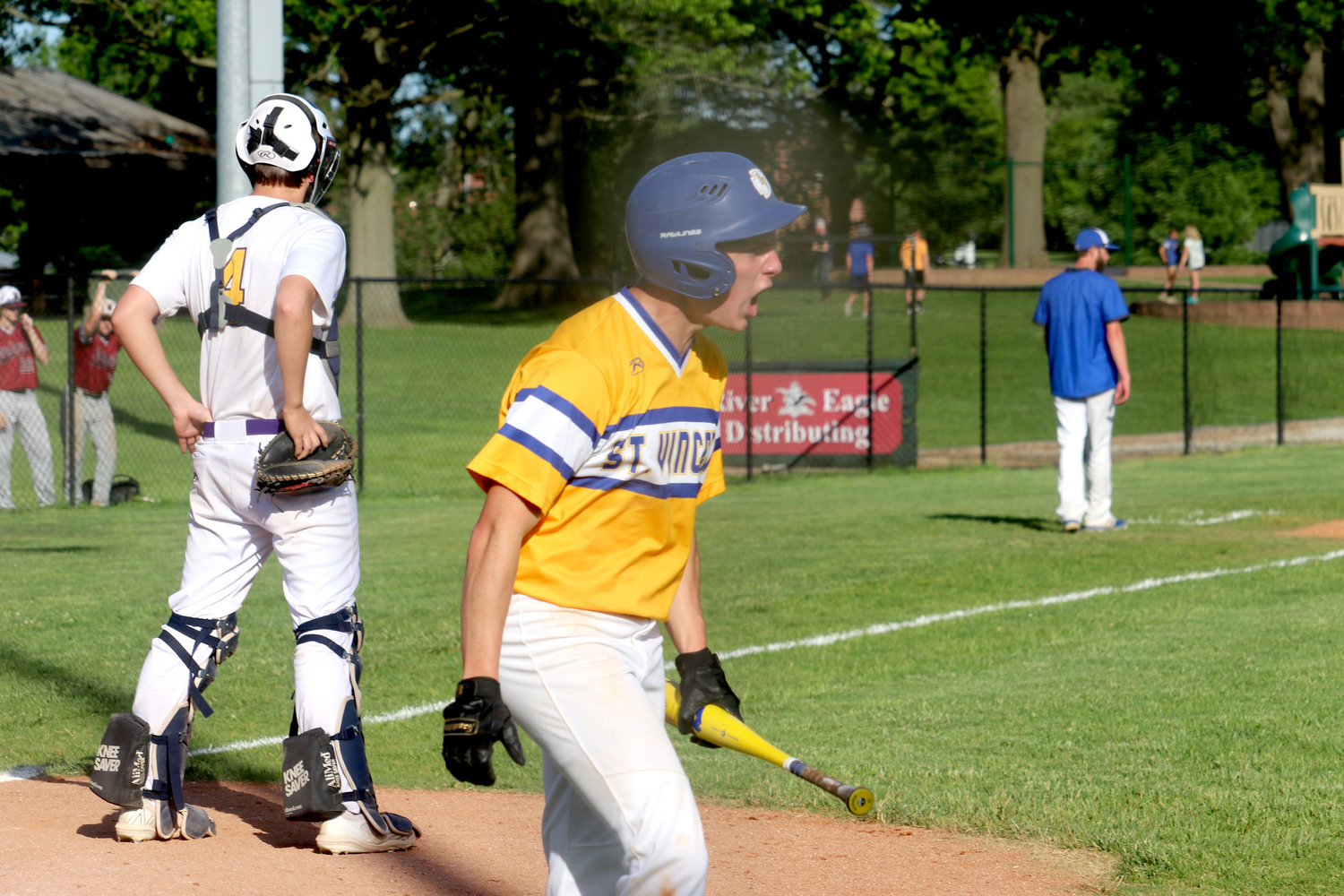 St. Vincent baseball coach Corey Sauer didn’t even know where to start when describing the Class 2, District 4 semifinal.
However, he did know how it ended.
Third-seed St. Vincent scored two runs in the seventh inning and held on for a 4-3 victory over second-seed Brentwood at Veterans Memorial Field in Perryville on Monday.
“The biggest thing we can take away is that our guys didn’t quit,” Sauer said. “We could have laid down on a couple miscues in the field or mistakes at the plate, but we didn’t give up.”
That type of “never say die” attitude could be seen throughout the game, but was no more evident in the sixth inning, after one of the craziest plays anyone has ever seen in a baseball game.
Brentwood senior Jordan Bradley led off the bottom of the sixth inning with a double, in what was a 2-2 game.
That was until St. Vincent catcher Jacob Seabaugh alerted his coaches and the umpires that the bat that Bradley used did not have a knob on it. The coaches and umpires discussed the matter for nearly 10 minutes before calling the batter out for using an illegal bat.
That didn’t slow down Brentwood which still scored a run in the inning after a walk to Trenton Mitchell and a throwing error allowed him to advance all the way to third base. Ian Thornton drove in Mitchell on a single to right field, which gave Brentwood a 3-2 advantage.
The Eagles loaded the bases with one out after an intentional walk later in the inning, and in probably the biggest play of the game Kaden Kassel threw out a runner trying to score on a sacrifice fly to end the inning and keep it an one run deficit for the Indians.
That proved to be huge as Grant Abernathy got the rally started for St. Vincent with a single to centerfield with one out.
Abernathy nearly became the second out when he was caught in a rundown trying to steal second base. The Brentwood second baseman could not handle the ball on the throw and Abernathy and St. Vincent had new life.
“That’s one that shouldn’t happen, but we finally got something to go our way,” Sauer said. “The baseball gods were looking out for us.”
The Indians made them pay for that mistake as Christian Schaaf came up with two outs and sent a line drive to center tying the game. Schaaf went 3 for 3 in the game with two RBI, and Sauer said the sophomore has been hot at the plate in the final weeks of the regular season and had more than half of the team’s five hits on the day.
“You know Christian is going to put up a good at-bat,” Sauer said. “He put the ball in play and that’s a kid that doesn’t let anything bother him. He is going to give it his best shot whether he’s down to his last strike or there is 30 seconds to go in a football game.”
The Indians weren’t done there as Schaaf came around to score on a sharp groundball to third that the fielder mishandled the ball and gave St. Vincent the 4-3 lead.
“I said it from day one that if we can put the ball in play, we give ourselves a chance,” Sauer said. “In the past we have taken a lot of strikeouts in spots like that.”
Blake Monier and Krauss took care of things on the mound as Moonier got the start and went 6 1/3 innings, gave up six hits, three runs (one earned), one walk and seven strikeouts. He came out after hitting the pitch limit, but Sauer was proud of his junior pitcher.
“When he’s on the mound, we feel like we have a chance to win,” Sauer said. “We came through and threw strikes and didn’t let the pressure of the moment bother him.”
Krauss came in with a runner on second in the seventh and one out. The senior got the final two outs of the game with a groundout to second base and a fly ball to center.
“You could tell he wanted the ball at the end,” Sauer said of Krauss. “It a perfect world, Blake would have closed it out without hitting the max, but Liam has closed games for us all year and with the game on the line, we know we can go to him.”
St. Vincent took the first lead of the game in the third inning on a single by Schaaf that scored Trevor Moonier. St. Vincent got into some trouble in the fourth as Brentwood scored two runs due to throwing errors to take a 2-1 lead. St. Vincent had three errors, and Brentwood had four in the contest.
St. Vincent tied the game in the fifth when Moonier singled, then advanced all the way to home on a throwing error to center field after a stolen base.
St. Vincent (11-6) played top seed Crystal City on Wednesday, May 18 for the district championship, who defeated the Indians 7-6 in the regular season.