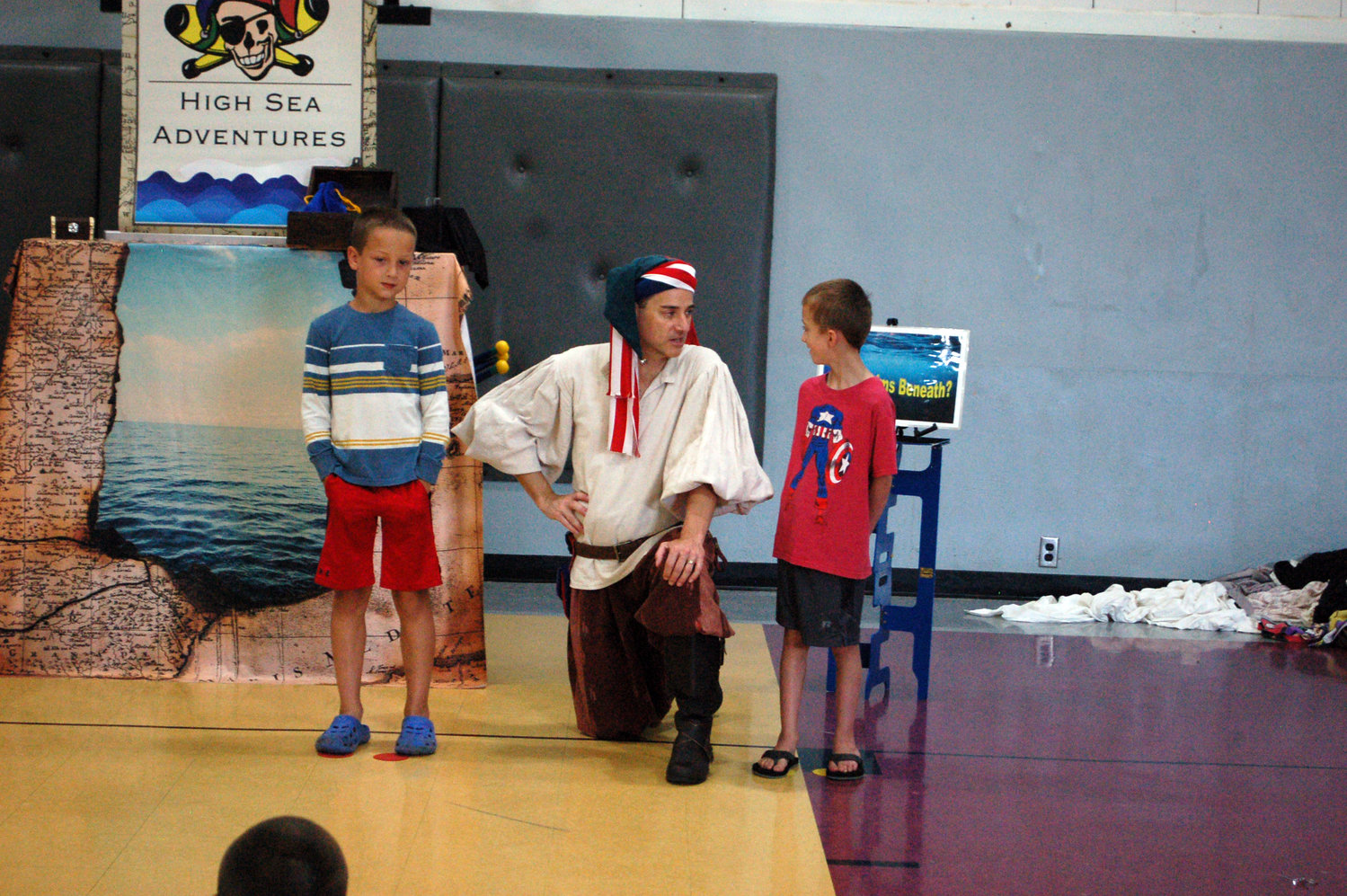 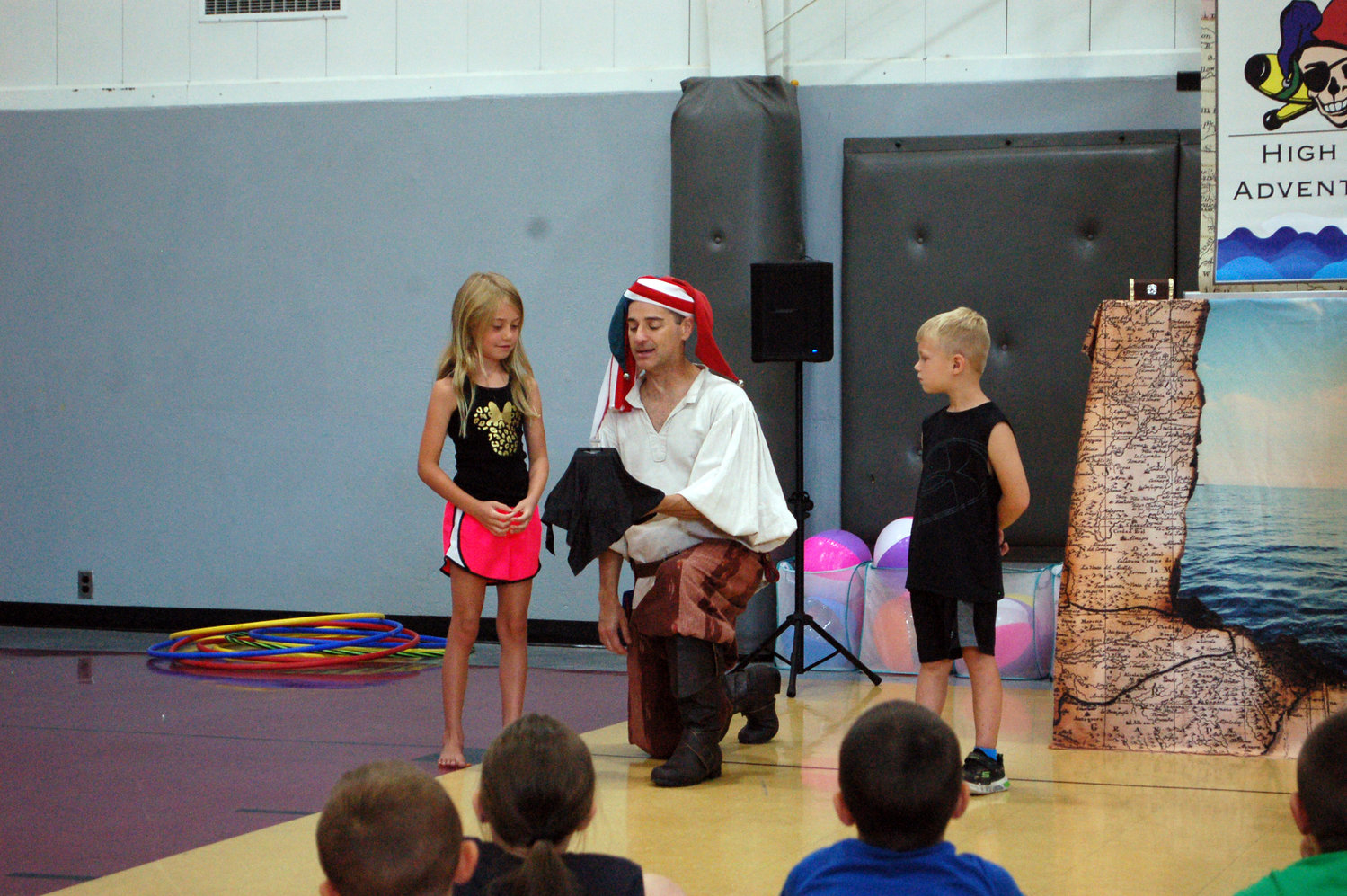 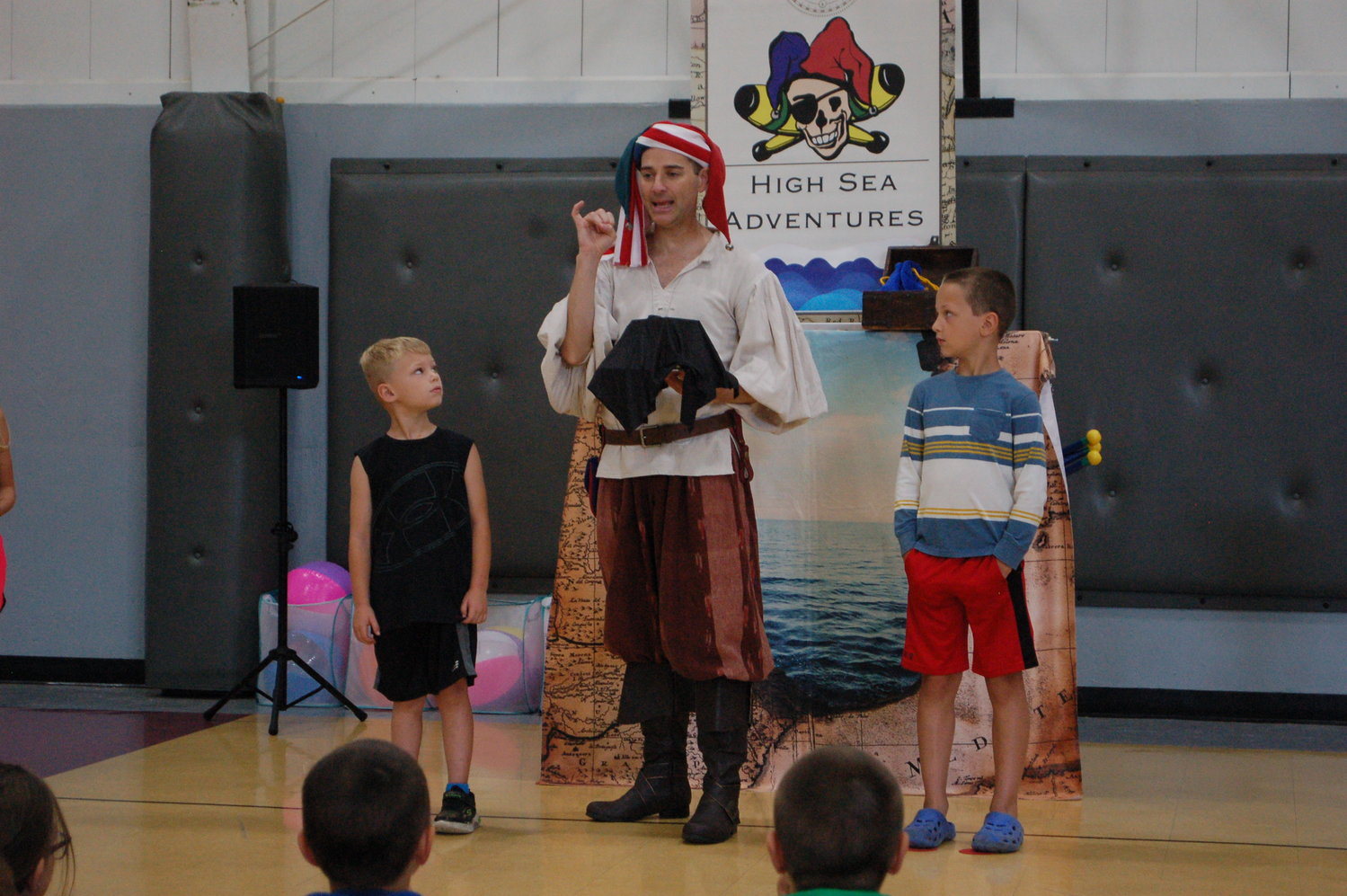 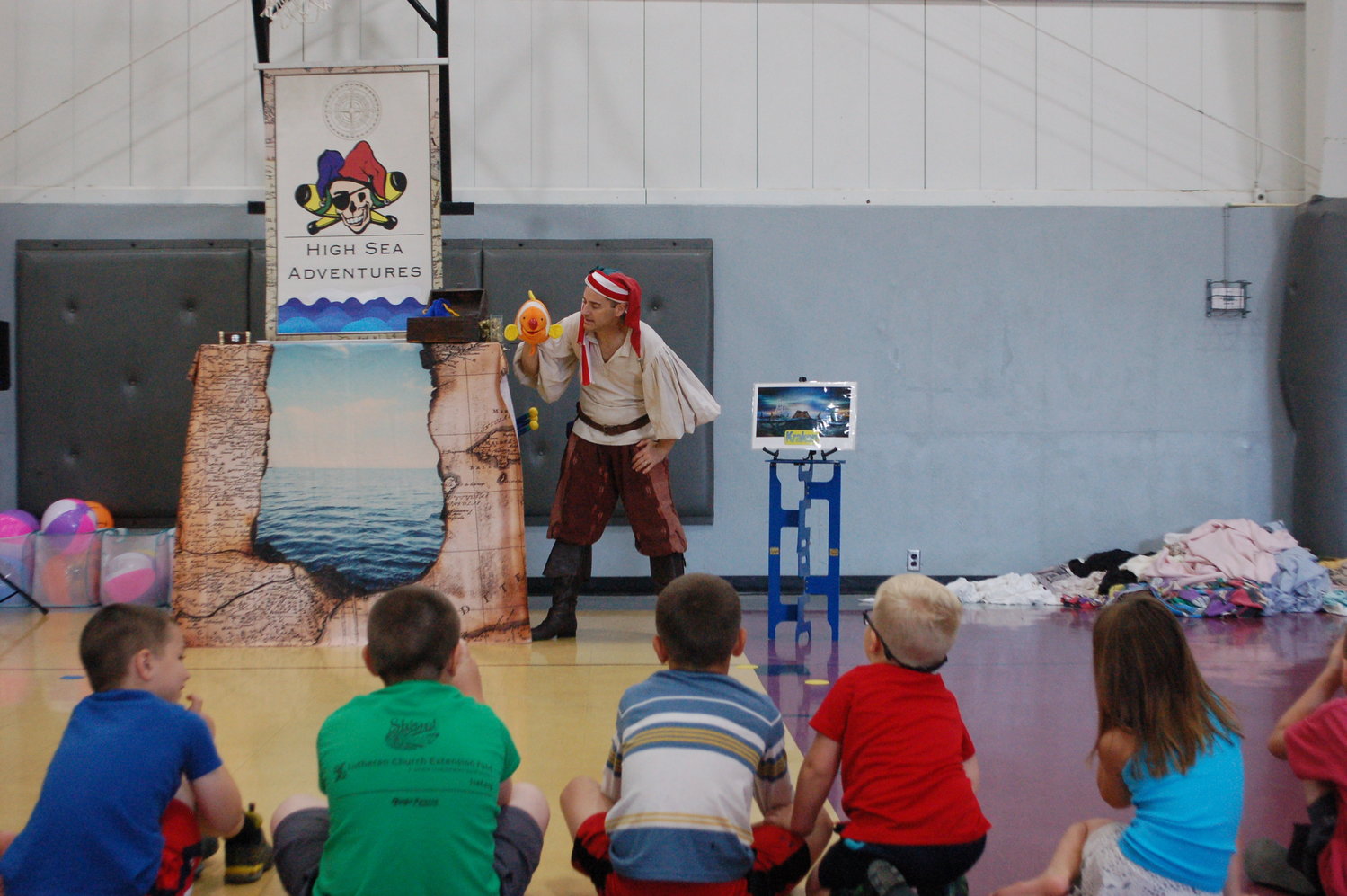 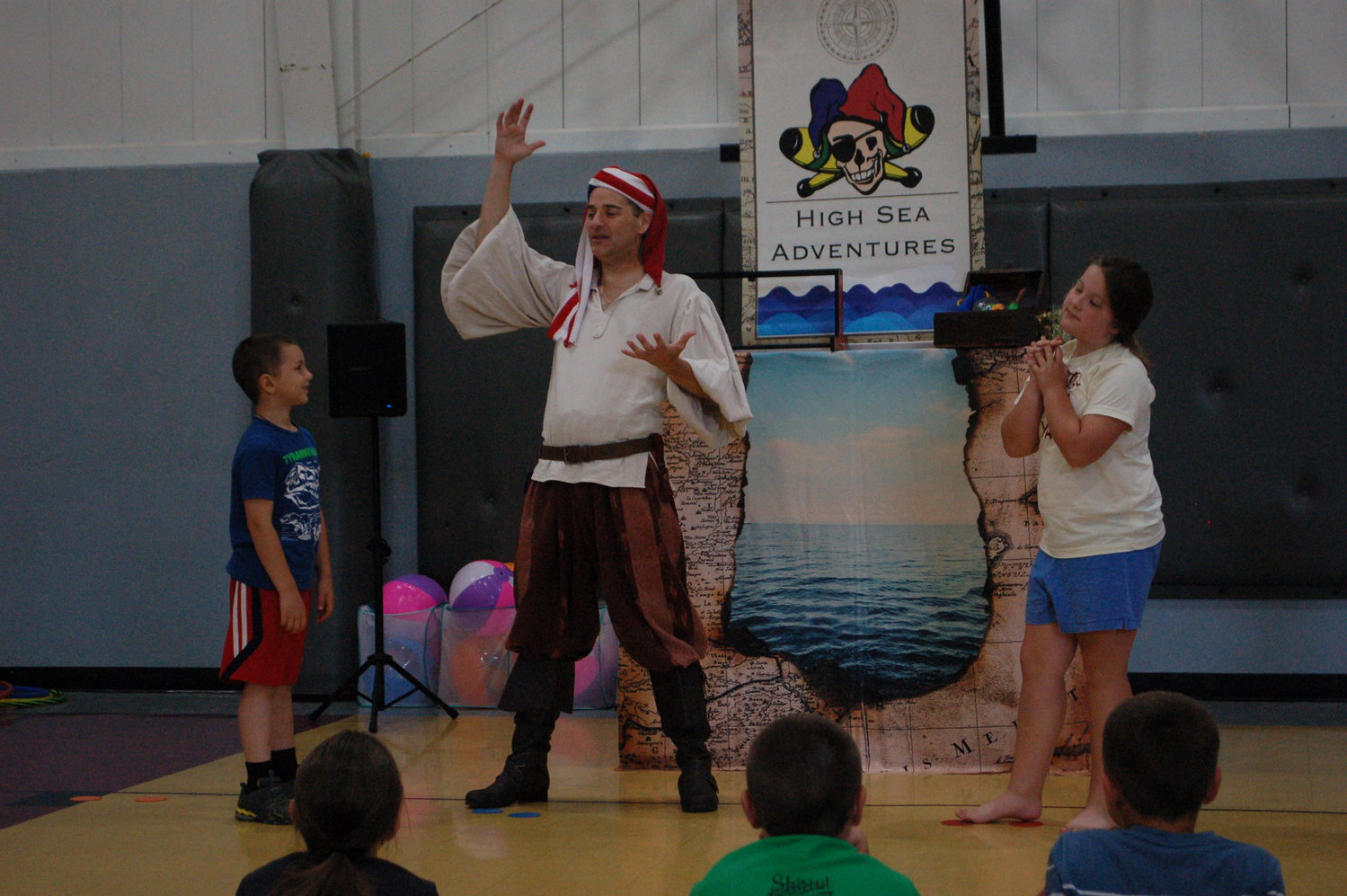 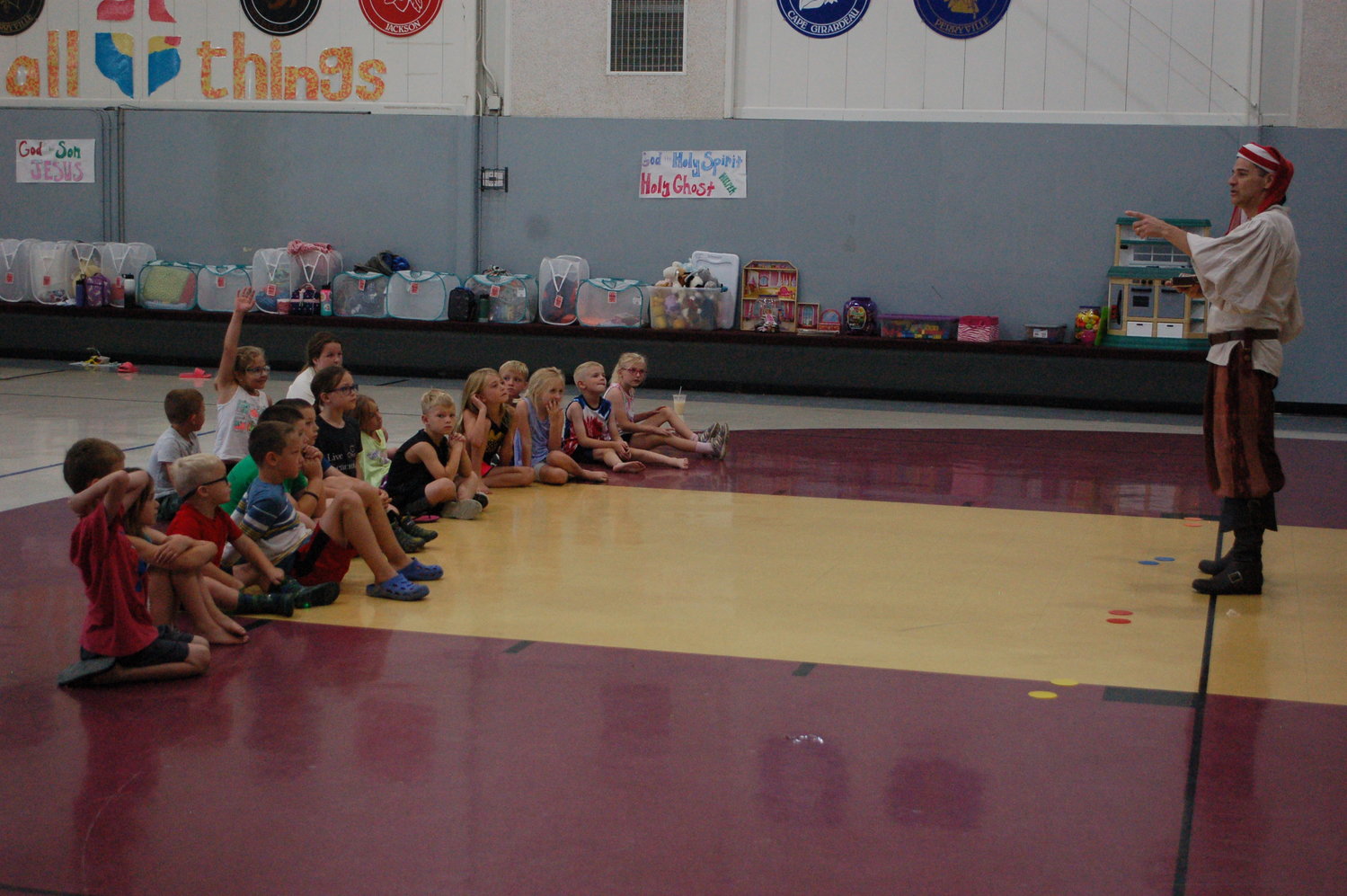 For several kids in Frohna Tuesday morning at the United in Christ Lutheran School gym, they got to learn about deep sea adventures and pirate quests as part of Riverside Regional Library’s summer reading program.
“Our program for the summer is ‘Oceans of Possibilities,’ so all summer long, from June 1 until Aug. 15, we’ll be running programs each week for all branches that will provide free entertainment for families,” said Desert Seidelman, Riverside Regional Library children/youth librarian. “We also have programs that are specifically for teens that kind of help them get back into reading. Our main goal, while we do have a reading challenge, is so the kids don’t lose that gap during the summer. We also want to provide entertainment for the families, kind of help them, encourage them to read more.”
This is the third week of the program, which continues through mid-August.
“We started it June 1 but prior to that I went to the schools and kind of hyped it up,” Seidelman said. “I would bring PowerPoints that would give clips of who was coming this summer, talk about the prizes, provide the calendars for the kids and working with local businesses to have the calendars out. They don’t have to be a library member to take part in it.”
Dennis Porter, who established Happy Faces Entertainment in 2001, presented Tuesday’s program. Porter appeared in character as “The Read Pirate Cornelius.” In his program, he invited several of the children on stage to participate in a treasure chest and magic adventures. Later, he introduced several deep sea creatures.
“I’m a variety entertainer, so I’ll do a little bit of everything for all ages in different areas,” he said.
Porter has traveled across the Midwest for many years and aims to provide a mix of humor with learning.
“I’m an entertainer,” he said. “I’ve been a clown for over 30 years so my goal in life is to give people some laughs and smiles. In the libraries, we do a lot of that, and we sneak in a little education, too, when they don’t know it’s happening. Sometimes a little life lesson happens there.”


Tuesday’s program was the elementary version. Later Tuesday, he appeared at Riverside’s Perryville location at the Perry Park Center for a murder mystery geared toward an older audience.
“We’re going to have these fun programs (so) that they come to the library, do some reading and pick up some books, you might say it’s a little trickery, but they know what’s going on,” Porter said.
In his pirate quest to provide reading and fun, Porter closed the event with an opportunity for the children to form their own story, giving those in the audience the chance to name specific parts in the journey.
“I frequently am getting the kids to use their creativity and imagination,” he said. “Let them think. That whole final thing…is about keeping that imagination in play.”
The Tuesday, June 14, program was geared for children ages five up to fifth grade.
NEXT WEEK
Riverside Regional Library summer reading program will be at the Altenburg location Tuesday, June 21, for a unit on turtle education. The event begins at 1:30 p.m.

Daniel Winningham can be reached at editor@perryvillenews.com.