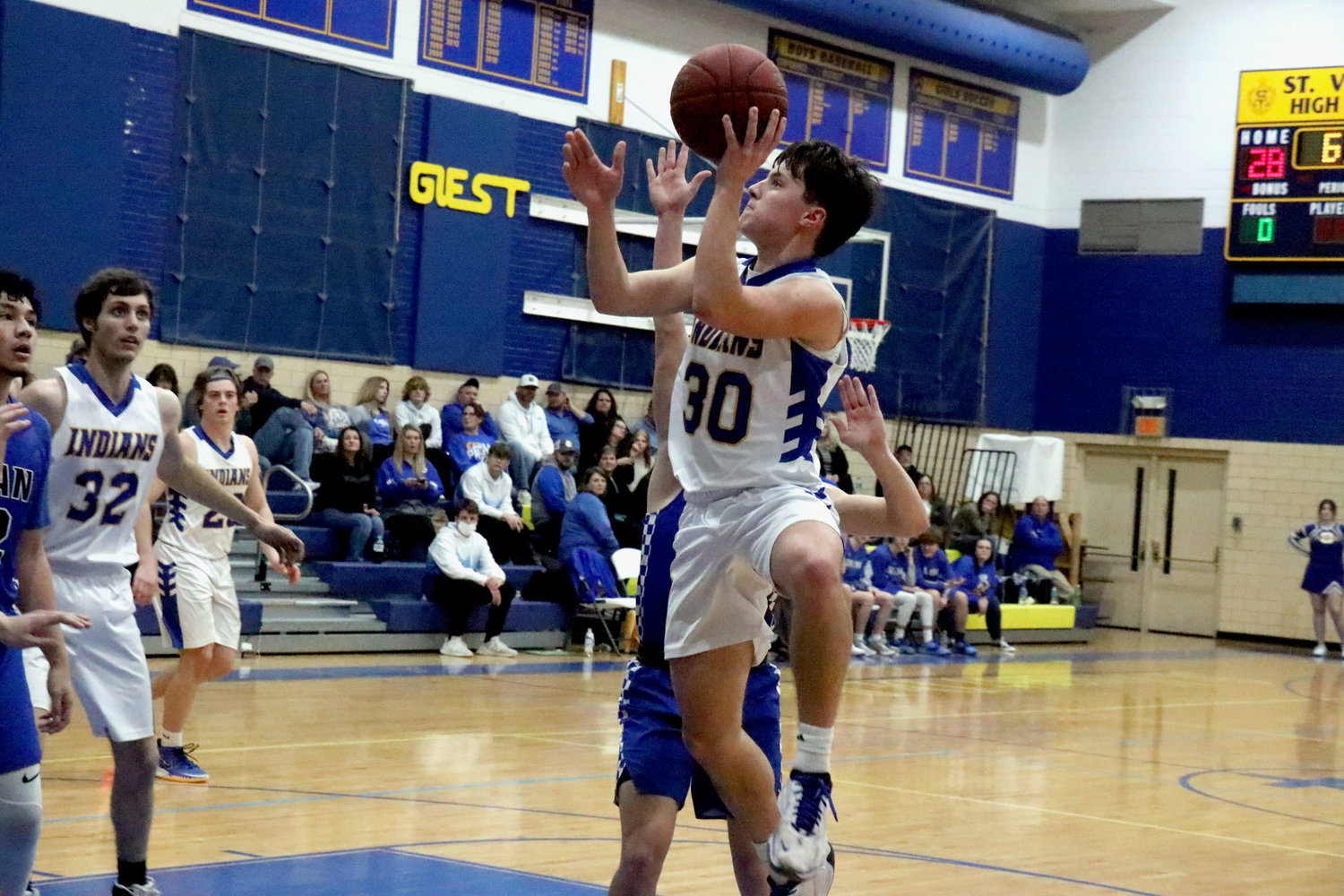 St. Vincent boys basketball coach Bruce Valleroy couldn’t have asked for a better start to his team’s summer. The Indians competed at the Chaffee Shootout from June 6-8 and went 6-0. St. Vincent defeated Chaffee, Meadow Heights, Bell City, Delta, East Prairie and Scott County Central during the three-day event.
Valleroy always likes playing in the Chaffee Tournament during the summer.
“You get to play against teams you don’t see during the regular season,” Valleroy said. “This gives the guys a chance to get on the court and play together.”
While Valleroy likes for his teams to compete in the summer, he is not worried about the win-loss record. Instead the focus is about knocking off the rust and just getting a ball into the hands of his players again.
“I don’t know how many other coaches do their summer camps, but I give everyone as much playing time as I can,“ Valleroy said. “I want to get everyone in a basketball mode again because a lot of these kids play a spring sport. The summer is a chance for me to see what I have and to look at our strengths and weaknesses.”
St. Vincent lost a total of five seniors (two starters) this past winter on a team that went 11-13, but return a number of key players, including seven seniors. Grant Abernathy was the team’s leading scorer last season (12.1 points per game), while Blake Monier was the only other player to average double figure points (11.9 points per game). St. Vincent will also add four juniors that went 17-3 at the junior varsity level.
“We have three starters and pretty much our whole bench coming back,” Valleroy said. “We have a good mixture of inside and outside players.”
Valleroy realizes that there could be a logjam for playing time with a large senior class and a class of juniors that have seen success within the St. Vincent program. He sees that as a positive.
“I think that can only improve the depth on our bench,” he said. “We have a number of quality players that can come in and keep us rolling.”
The depth also allows for some versatility on the court with several players able to play different positions at any given time.
“Last year, I felt like we were tight in some different positions and got into some spots where we couldn’t move some people around,” Valleroy said.
Valleroy wasn’t ready to divulge his entire game plan in the middle of June, but hopes that his roster will allow him to do some new things on offense.
“We installed some new offenses and we want to run a little more this season,” he said. “We still have a lot of tinkering with this new stuff to get it right, but the summer is a good time to work on those types of things. We want to get up and down the floor in a smart way.”
Don’t think with this new offensive system, that Valleroy forgot about the defensive side of the game. He felt like his team stepped up on that side of the floor during the six games in Chaffee.
“That’s what I want to see,” he said. “Hopefully, the guys have bought into that and realize that to be successful they have to focus on both sides of the game, not just offensively. Defense can certainly create points too.”
Valleroy noted that his team still has the length inside to compete and cause havoc for other teams.
“We have some length inside and at the guard positions as well.,” Valleroy said. “We want to use that to our advantage.”
St. Vincent still has several things planned for the rest of the summer including a couple scrimmages with Valle Catholic and Perryville on June 20, along with some other events.
“We still have a long way to go, but I believe that if we keep working, we have the chance to be very good,” Valleroy said.

Justin Hotop can be reached at jhotop@perryvillenews.com.

Not your regular mowers