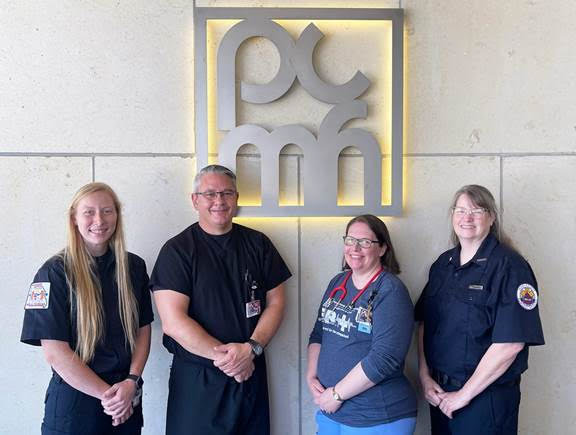 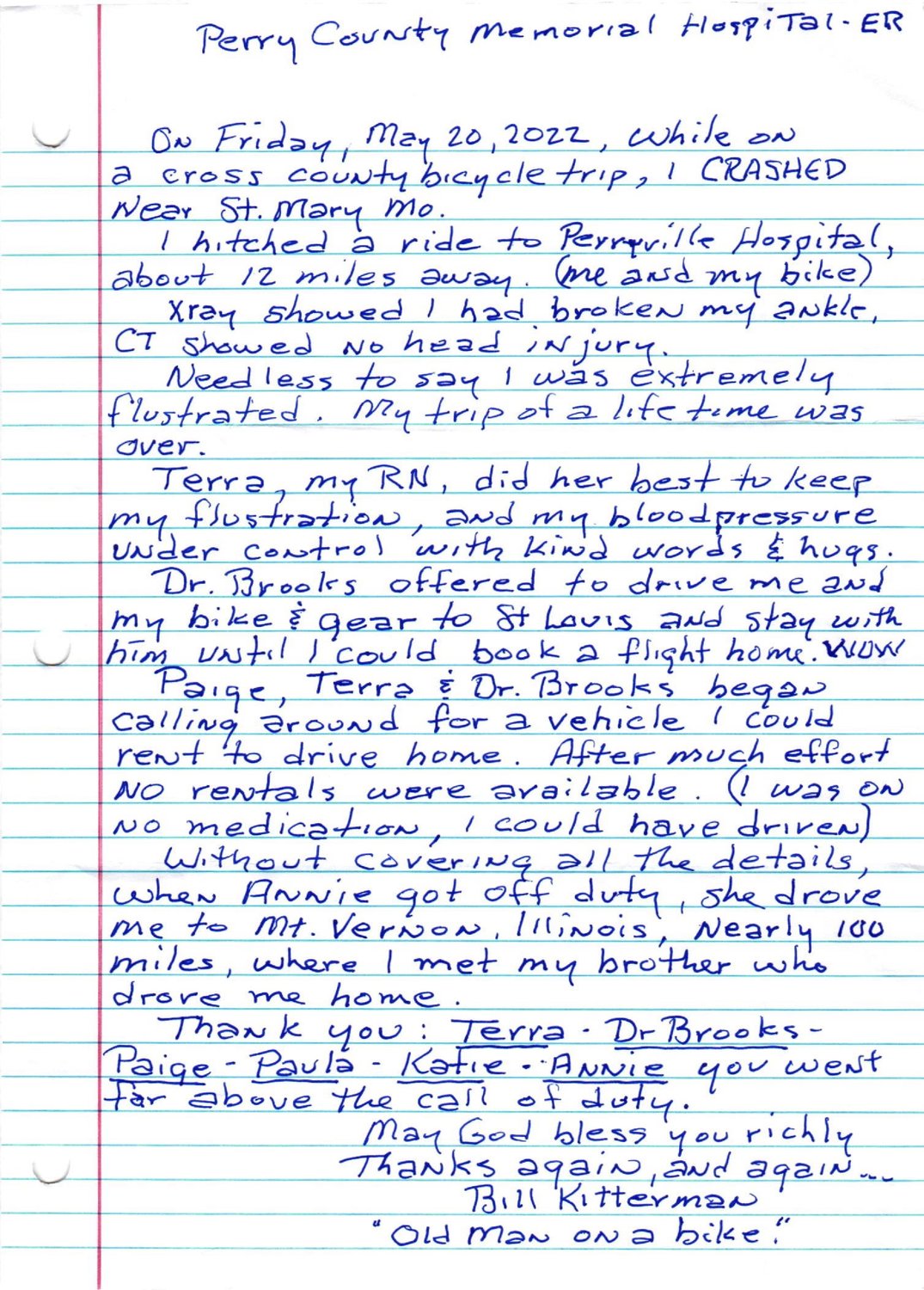 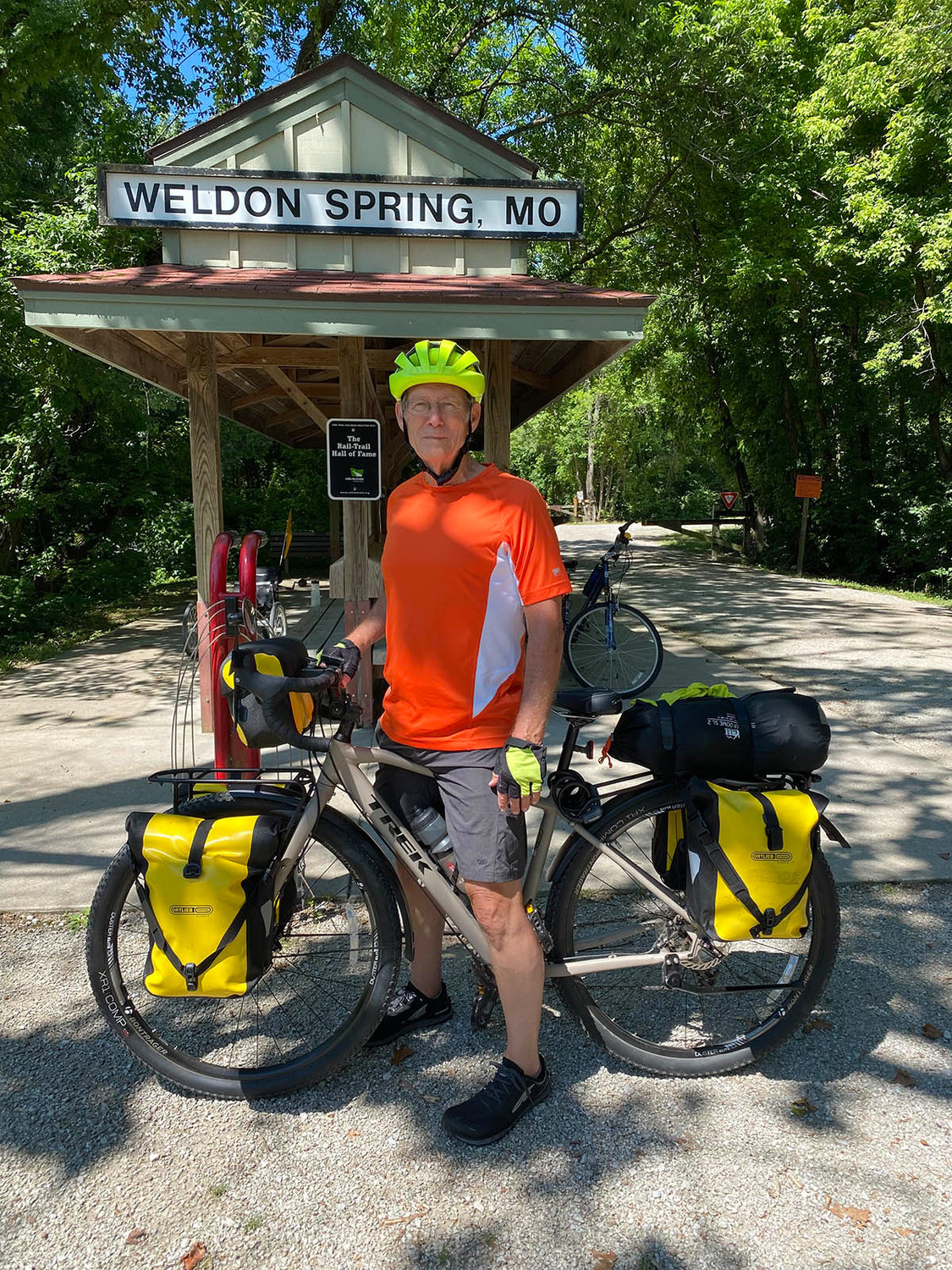 Bill Kitterman of Leitchfield, KY, has made many excursions on his bike in the past.
Although his latest adventure did not go as planned.
Kitterman, 81, had a life-long dream to ride his bike cross-country to Oregon. Kitterman started in Kentucky, but made it 480 miles before he crashed his bike on a hill near St. Mary on a windy day on May 20th.
“I have had some more horrific falls before that I actually walked away from,” Kitterman said. “This one I was not so lucky.”
By himself, Kitterman pushed his bike for a while before calling the sheriff’s department for help.
“They wanted to send an ambulance, but of course I couldn’t do that because I had a bike,” Kitterman said. “It was an expensive bike and I didn’t want to leave it on the side of the road, so I decided that I would figure things out on my own.”
From there he came to a gas station west of St. Mary, where a local man took him to Perry County Memorial Hospital.
Kitterman was diagnosed with a broken ankle and he felt like the staff at PCMH went above and beyond the call of duty to help him.
“They did everything possible for me,” Kitterman said. “Terra, my RN, did her best to keep my frustration and blood pressure down and Dr. Brooks offered to drive myself and bike to St. Louis while I booked a flight home.”
The hospital staff called car rental businesses in the area in an attempt to rent a vehicle to get Kitterman home. Eventually, an EMT drove him more than 100 miles to Mount Vernon, IL, where Kitterman met up with his brother, who took him home.
“I’m not really sure if doctors and nurses are supposed to help you with transportation or things like that,” Kitterman said. “Everyone kept telling me that once they got off work they would help me with this or that. I was amazed.”
Kitterman noted that he thanked the staff many times during his stay.
“I thanked them over and over again. I couldn’t do it enough,” Kitterman said.
Kitterman has travelled the east coast on his bike and is working on his way on the west coast. Even despite the fall, Kitterman is not afraid to get back on the bike once his ankle is fully healed.
“I don’t know if I will go cross country again, but I will get back on my bike,” Kitterman said. “My son told me he would take me to the spot where I fell so I could finish the ride. I will have to do it next year because it’s too hot now. Next year I will be 82 and time is not on my side anymore.”
Kitterman hopes that when he gets back on his bike that he doesn’t have a bad accident, but if he does he hopes that the staff is as nice as those at Perry County Memorial Hospital.