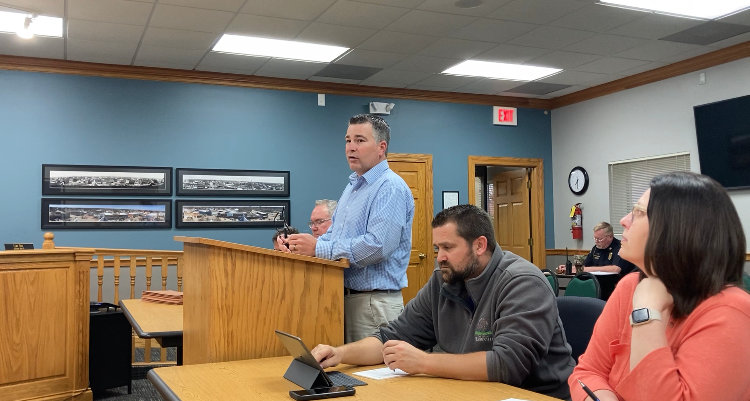 The replacement for former Perry County Economic Development Authority executive director Scott Sattler began her new job earlier this month.
Crystal Jones attended her first City of Perryville Board of Aldermen meeting Tuesday, May 3, and was given the opportunity to provide an economic development update.
“I’ve been on the job for two days now,” she said at the first May meeting. “I’m kind of trying to get my bearings and pick up a little bit where Scott (Sattler) left off. Some of the things I’ve kind of started working on is, I know the board has looked at a strategic plan for the organization so I’m kind of looking at some of those options. I’d like to get an inventory of our vacant buildings and sites that are available and put those online so that people who are looking for sites can easily find those and so I can know what that inventory looks like.”
An event sponsored by the Perryville Area Chamber of Commerce was held for Jones Wednesday, May 4, at the Bank of Missouri location at the intersection of Highway 51/61.

ADMINISTRATOR’S REPORT
City administrator Brent Buerck said the city of Perryville will host a Missouri Municipal League Southeast regional meeting Thursday, June 23, at the Catalyst Center for Business.
It’s an opportunity for representatives from several communities in the southeast Missouri region to gather together, Buerck noted.
“They come to the community, they learn together,” Buerck said. “It gives you a chance to meet some of your peers, to brainstorm ideas. The topic that evening will be cybersecurity.”
A catered meal will be served at the June 23 meeting, which will take place from 6 to 8 p.m.
“We’re getting an opportunity to host, we’d like to have a good showing,” Buerck said.
Buerck said a recent news report about the Chester bridge states that the environmental assessment is being re-evaluated.
“There’s no reason for concern,” Buerck said. “What they’re trying to do is broaden their footprint for the contractors who work with them.”
This process won’t affect the project schedule for a new bridge, according to Buerck. “They plan on releasing an RFP (request for proposal) in August, it will be a design/build proposal, selecting the best proposal in January and starting constructing next year at this time.” Next April or May, the new bridge could be under construction and this is exciting news, according to Buerck.
Buerck notified the Board of Aldermen of an ammonia violation at the city of Perryville’s wastewater treatment plant.
“This is probably the first of several we may get as this plant continues to get older and the new plant is not done,” Buerck said. “(The Department of Natural Resources) knows what we’re doing but we did violate our permit. I wanted to let you know, and I’ll do it each time it happens.”
Buerck will begin a five-month Missouri Leadership program later this month.
Buerck announced that a casting call for an upcoming film was scheduled to take place May 4 at the Catalyst Center. The county is letting them use the courthouse for several scenes, Buerck noted.
ENGINEER’S REPORT
As part of his meeting report, Baer noted that work on a retaining wall at Miget Park has begun. In addition, due to the sewer trunk line project which runs parallel to Dry Branch Run, Smith Street will soon be closed and traffic will get detoured to around to Highway E.
COMMITTEE REPORTS
Guth, in his public works report, questioned why the fence at the lift station near Big Spring Boulevard was down. Public works director Jeff Layton said an individual ran into it, and that the city was waiting on an insurance claim and now the department is waiting on a contractor to complete the fence repair.
NEXT MEETING
The next Board of Aldermen meeting will take place Tuesday, May 17, at 6:30 p.m.