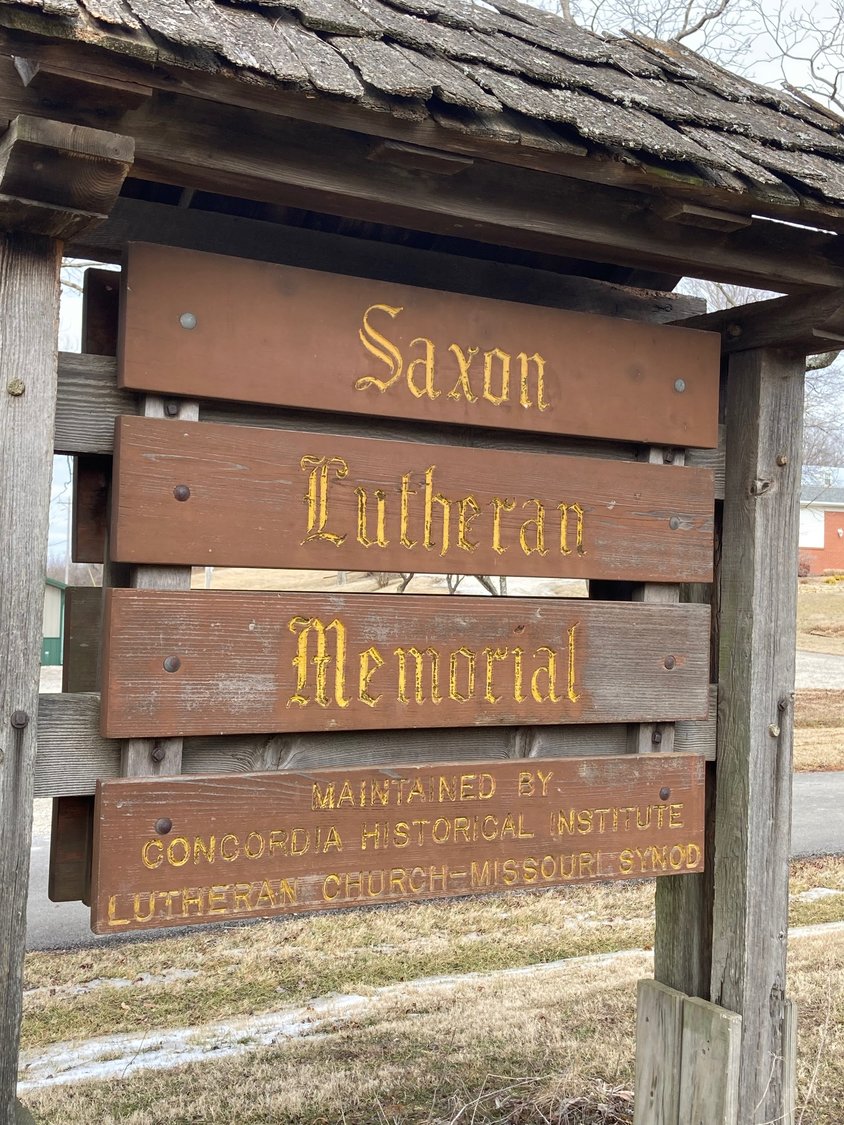 One of the more notable areas in Perry County that plays a role in preserving the unique history of those who first arrived in the late 1830s recently underwent a change in ownership. The Saxon Lutheran Memorial site, more than 30 acres east of Highway C in Frohna, was sold by Concordia Historical Institute to a local group. The sale was finalized Jan. 31.
Saxon Lutheran Memorial. Inc. issued a statement about the ownership transfer earlier this month.
“Saxon Lutheran Memorial, Inc., a 501(c)(3) non-profit organization, is proud to announce that as of January 31, 2022, we have purchased the land and assets of the site known as Saxon Lutheran Memorial (SLM). Our organization, formed by local community members, intends to continue the long-held mission of SLM. Our plans include restoring and preserving the existing cabins and structures and growing awareness of our heritage. Our hope is that with the site now in local ownership, there will be an increased interest in the mission. With your help, both physical and financial, we will endeavor to preserve the past for the future.”
The Facebook post from Feb. 10, which also sought donations, detailed the purchase and laid out future plans and goals for the site.
“The property no longer fit their mission,” Petzoldt said last week.
Rev. Dr. Daniel Harmelink, executive director of Concordia Historical Institute, answered a few questions about the transfer last weekend.
“It is the prayer of CHI that the sale of the property will be a great time to stimulate local support and pride in the site and advance the fall festival,” Harmelink said. “We see these properties as kind of an entry door into getting into the history Lutheran Church and the original settlers of Perry County.
SLM is a fantastic site to get people interested in early Lutheranism and then individuals they can do further reading, noted Harmelink.
“It’s an important site,” he said. “Under the local leadership now, CHI only wishes them the best in getting people interested and involved in the history of Perry County.”
“Over a year ago, we encouraged them to form their own 501c3,” Harmelink said. “They are in really great shape to be a good non-profit for a long time to come.”
A local council has supervised the site for several years, according to Petzoldt.
“The site has been self-sustaining for a long time,” Petzoldt said. “We’re going to continue that.”
The annual Saxon Lutheran Memorial Fall Festival, held every year the second Saturday in October, is the main fund-raiser. For 2022, that event will take place Saturday, Oct. 8.

Background
Initially, Concordia Historical Institute acquired 11.5 acres of the site in February 1961 after an agreement with Concordia Lutheran Church in Frohna for ownership could not be worked out.
Additional property was acquired later on, according to Harmelink.
“We hope this transition will be a great opportunity to get people interested in the Lutheran history in and around Perry County,” Harmelink said.
A statement of mutual cooperation further explains the SLM group’s goal of using the property for


“Concordia Historical Institute and Saxon Lutheran Memorial, Inc. have arranged for the transfer of and continuation of the operation of Saxon Lutheran Memorial Saxon Lutheran Memorial, Inc., under terms and conditions agreeable to the Parties,” according to the statement. “Each of the Parties cooperated in the transfer of the Memorial Property, its buildings, associated structures/furnishings, and personal property items to the parties’ mutual benefit for purposes of carrying on the mission of the Saxon Lutheran Memorial.”
Even with the sale of SLM to the local group, CHI will still maintain a presence in Perry County. It owns the Hill of Peace Lutheran Church in Friedenburg, which was founded by Bavarian.
CHI continues to promote their history, which includes three services a year on 3 p.m. on Sundays close to Easter, before Christmas as well as the weekend of the fall festival, with more of a harvest theme.

LCMS anniversary approaches
The CHI board took action in December of 1959 to authorize the purchase of the SLM site, though it wasn’t finalized until an agreement was signed in Perryville Feb. 11, 1961.
Missouri Director of Revenue Milton Carpenter was an early advocate for the site’s preservation. In addition, Missouri Governor James Blair declared the homestead “worthy of historical presentation” in a proclamation.
“It’s historical value is enhanced by the fact that the hosue located on this land played a significant role in the early development of the Lutheran Church Missouri Synod,” CHI said in a Feb. 23, 1961 press release.
Constructed originally as a home, during the 1840s and 1850s, the structure served as Concordia’s parsish school temporarily. “…The structure can undoubtedly claim the distinction of being the oldest remaining building used for parish school purposes within Lutheranism in America,” according to the release.
Harmelink said when CHI originally obtained the site, it was dedicated on the anniversary of the Reformation (Oct. 31) in 1964.
“This property, whose history and heritage is so intimately related to that of the Missouri Synod, has become an historical monument to the pioneering founders of our faith in America,” according to the order of service for the 1964 dedication. “It is well on its way to becoming a living museum of the indoor and outdoor life of this historic community.”
Another notable LCMS anniversary is coming up later this spring, according to Harmelink.
“In April of this year, we’re celebrating 175 years of the Lutheran Church Missouri Synod. It was largely Saxon immigrants that founded the synod. They were in search of a place where they could practice their religion freely.
The original settlements included Frohna, Altenburg, Dresden, Seelitz, Paitzdorf and Wittenberg. “They were the first generation of German settlers,” Harmelink said. “When they arrived in Perry County it was wilderness. They had to learn very quickly how to survive.”
The idea was to not only restore the Bergt cabin but also other buildings on the site, according to Harmelink. The first curator received a two-year contract. Typically, the early curators were retired pastors
“The curators served as on-site manager,” Harmelink said. “The most recent curator resigned in 2015. We’ve been looking for a curator…it had to be a good fit.”
The property took a great amount of time to maintain.
“There’s so much land there that has to be mowed,” he said. “It’s a lot of work for a retired person. We had been actively looking for a curator since the last one resigned.”
Those involved with what is now the SLM Inc. group were part of an advisory council that maintained the property in lieu of a manager, Harmelink said.
“All of those log cabins need constant work,” Harmelink said.