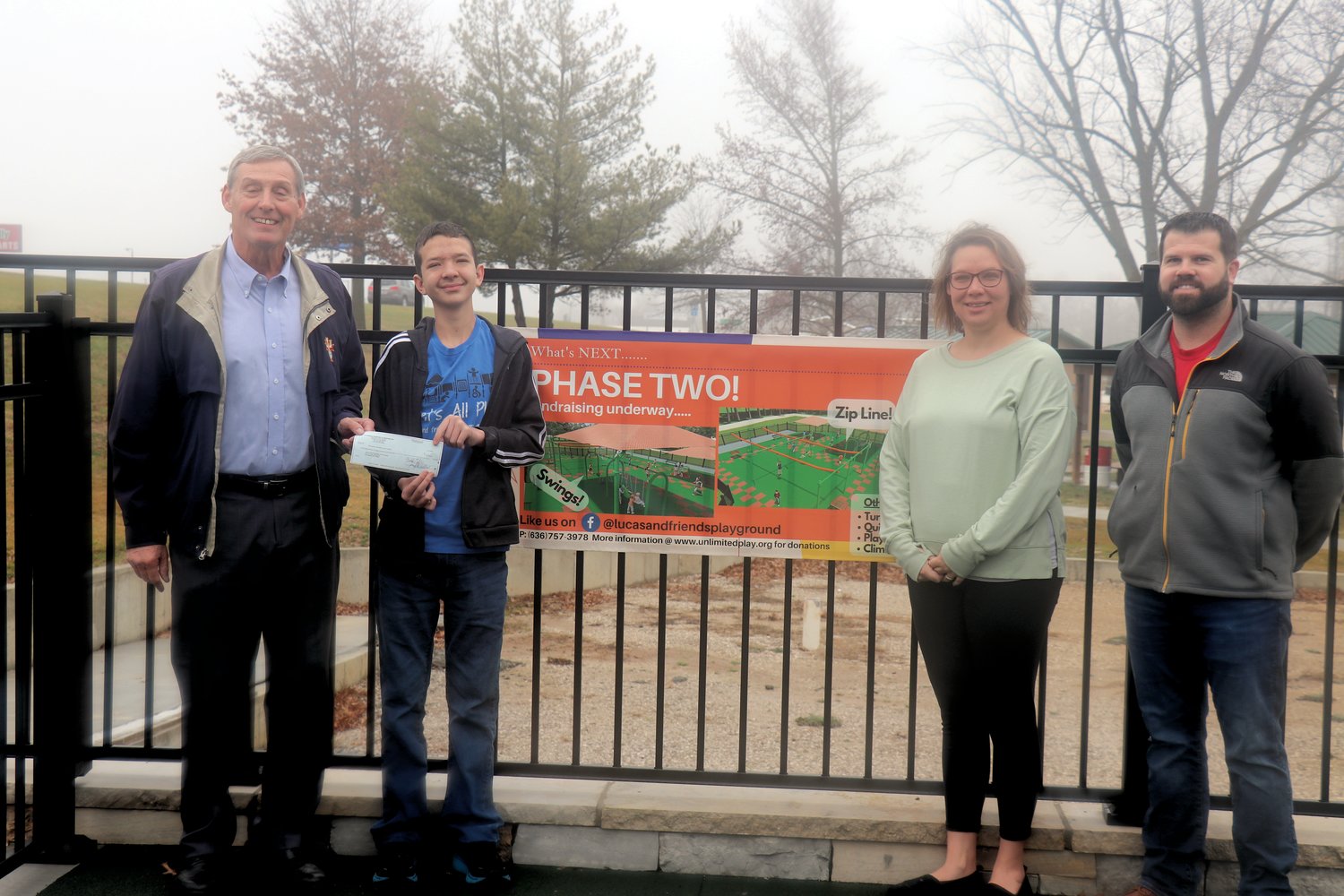 The Perryville Knights of Columbus Council No. 1263’s 49th annual Tootsie Roll Drive treated donors with the small chocolate candies but had a much larger treat for the whole community, particularly for Lucas Fritsche.
“Every year, the Knights of Columbus both in Missouri and in Illinois raise funds for the developmentally disabled,” said Tootsie Roll Drive Chairman and Knights of Columbus Membership Director Tom Zarlingo. “Our local goal was $5,000. We had our best year this year.”
In total, the Tootsie Roll Drive raised $7,757 in 2021 for the developmentally disabled. The Knights of Columbus decided to give to the construction of an all-inclusive playground in Perryville. In total, the Knights of Columbus donated $3,279 of the Tootsie Roll Drive’s proceeds for Fritsche to use toward funding his playground. The proceeds will go towards the second phase of the Lucas and Friends Backyard Adventure.
The Knights of Columbus has donated money to the playground project for the last four years, which has totaled $11,576. This is the first year the money will go to Phase two of the project. The recently completed phase included a huge ramping structure, tree house and musical equipment. The project took $500,000 to complete through donations and various fundraising efforts. The playground officially opened Oct. 6.
Phase one is not the end of the project as the next portion is already in progress, but still in the planning phase. The next step will include swings and other features. A site plan can be viewed at the park now.
“It was approved at our membership meeting to give some of the funds this year to the Lucas and Friends Backyard Adventures Playground at the Robert J. Miget Memorial Park,” Zarlingo said. “The Knights of Columbus saw the playground.”
The Knights of Columbus saw this all-inclusive playground as a worthy cause that could benefit the community, particularly those with disabilities.
“He [Fritsche] saw the need for a playground for kids who have disabilities.” Zarlingo said. “The city has gotten involved. They designated a park to place it in, and they’ve actually built a Splash Pad alongside this playground.”
When Fritsche was in third grade, he noticed that his friend with disabilities could only play on the swings.
Wanting to give his friend and others with disabilities the same opportunity to play that he has, Fritsche got to work on the idea for an all-inclusive playground.
He presented his ideas at his school and spoke with the city on making this dream come true. The project has been a partnership between the Fritsches, Perry County, and the city of Perryville, as well as countless local businesses and volunteers.
Lucas’ mother, Jennifer Fritsche, and a group of volunteers put together a plan to construct phase one of the playground on the west side of French Lane, with the help of Unlimited Play Playgrounds
Now, about five years later, that portion was completed earlier this year, with more on the way.
Along with events like these from the Knights of Columbus, about $180,000 is needed to complete phase two.