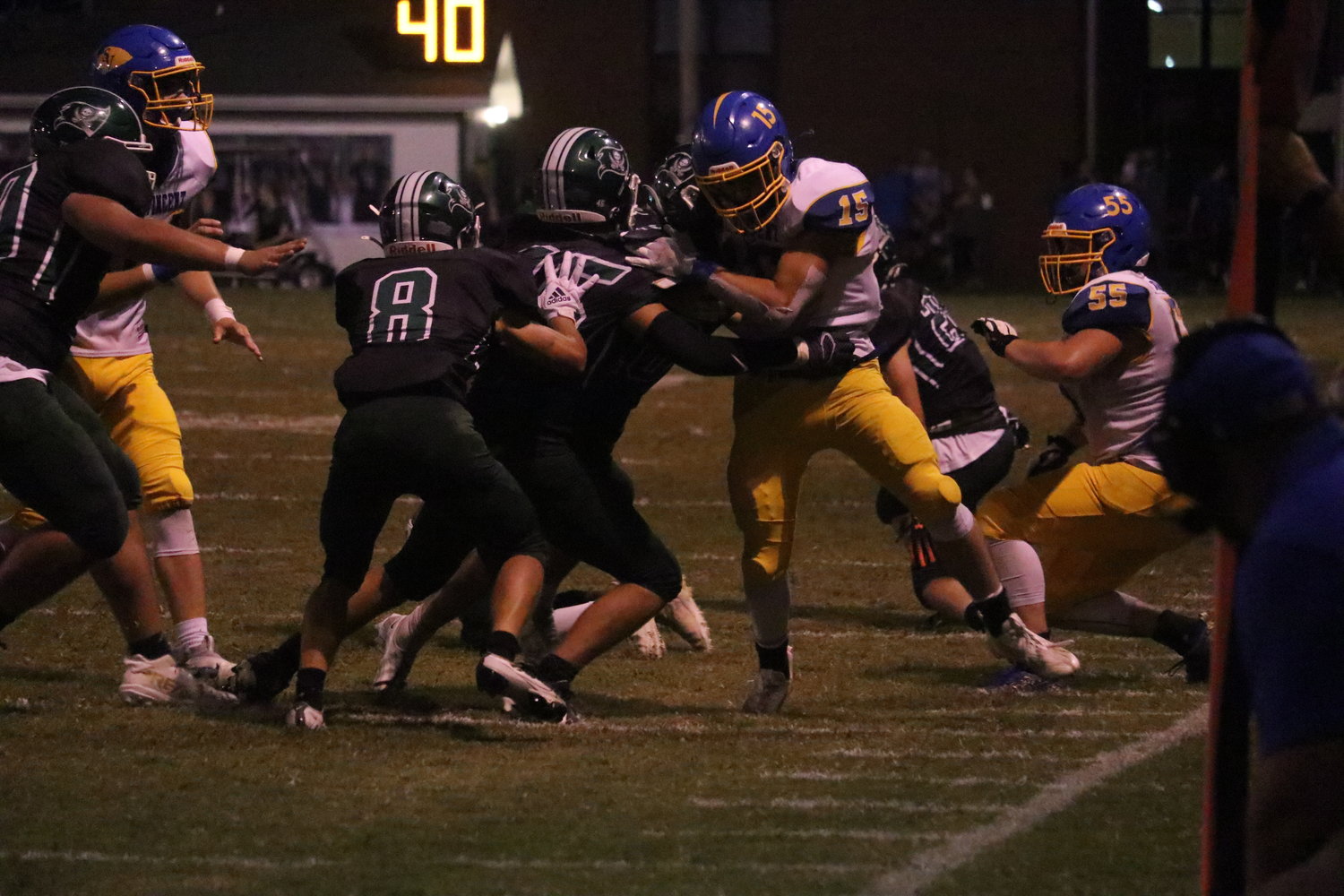 The outcome was up in the air, until the Indians seized control.
After a close game for much of the first three quarters, St. Vincent took advantage of three Perryville turnovers in the second half to defeat the Pirates 38-7 at Pirate Stadium Sept. 9.
It was the Indians’ fifth straight victory over Perryville.
“I knew it was going to be a battle,” St. Vincent coach Tim Schumer said. “It’s a rivalry game. Throw the records out because we were going to get their best shot regardless of how they have done the past few weeks.”
St. Vincent quickly struck first.
St. Vincent senior Kaden Kassel scooped up a fumble on the first play of the game and scored just six seconds into the game to take a 7-0 lead.
From there it was seemingly all Pirates all the time. Perryville drained more than eight minutes off the clock during a long drive that saw Ben Hotop dive across the goal line for a five-yard touchdown to tie the game with 3:15 left in the opening quarter.
That was exactly how Perryville coach Brent Roth wanted the offense to operate.
“That was the exact game plan for the whole game,” Roth said. “We wanted to keep the ball out of St. Vincent’s hands and kill clock offensively.”
For Schumer, who’s team averaged nearly 40 points per game through the first two weeks, the long drive left him anxious.
“We got that first touchdown but then they put a drive together and I’m like ‘Are we even going to touch the ball in the first quarter?’” he said. “I know my general personality and I like to go, go, go, but I was there twiddling my thumbs.”
The teams traded field position, which included Perryville’s Evan Hayden intercepting a Christian Schaaf pass, for the rest of the first half until Perryville punted with about two minutes left in the second quarmidfield. Kassel had a nice return and set St. Vincent up in Pirate territory. St. Vincent made the most of it, as Mason Light scored from seven yards out with 26 seconds left in the second quarter that gave the Indians a 14-7 at halftime.


The running game and defense was a focal point for the Indian offense against the Pirates. St. Vincent ran the ball 35 times, compared to just 15 pass attempts. Mason Light led the way with 118 yards on 17 carries. Schaaf ran for 64 yards on eight carries and was 10-15 passing for 94 yards and one touchdown and one interception.
“We found some success in the running game, which was nice,” Schumer said. “We were able to keep hitting that and it kept us going, especially in the second half where we were able to get some other things going on defense.”
After a Trevor Moonier 37-yard field goal was the only points scored in the third quarter, the St. Vincent defense made its presence felt. St. Vincent tipped a Rilaynd Graham pass at the line and Kassel came away with the interception. Several plays later, Conner McMillian scored from one yard out to give the Indians a 24-7 lead.
Moonier picked off another Graham pass on the ensuing drive and ran it in for another St. Vincent touchdown. Schumer noted that it was big for his senior.
“Trevor has been battling all year,” Schumer said. “He’s had two or three dropped interceptions when no one was in front of him. When the ball was in the air, I’m like ‘this is the one.’ He was able to make a good play and get in the endzone.”
Another tipped pass was secured by Jacob Hennemann, which set up a 21-yard pass from Schaaf to Moonier to ice the game.
Roth believes his defense has been playing well through the first three weeks, it is the offense that needs to find traction.
Perryville has scored 14 points through the first 12 quarters. Perryville produced 125 total yards (99 yards rushing) and was led by Cooper Hudson’s 49 rushing yards on 11 carries.
“That has been the story all year,” he said. “The defense has been playing well all year and the offense has got to get it going. We have to figure it out as a unit to put points on the board. We are not balanced enough and for whatever reason, we are not getting those second level blocks. We are not able to bust the big one yet. We have to find a way to be more explosive. I love 16 play drives, but you can’t live on those.”
Perryville will travel to Bayless Friday. Bayless (1-2) fell to Crystal City 32-14 in week 3.
“It should be a winnable game, but we thought last week was going to be a winnable game too and it didn’t end up that way,” he said. “We are the 0-3 Pirates until we beat somebody. We’ve got to get a win before we can talk about how bad other people are.”
St. Vincent (3-0) will host Herculaneum on Friday. The Blackcats (3-0) defeated Jefferson 16-8 last week.
“I’m glad we were able to rise to the occasion and put the blinders on all week,” Schumer said. “We were hearing how good we were against Scott City. You don’t want to drink your own Kool-Aid too often and were able to get the win. We will celebrate this one, but we are on to Herculaneum.”