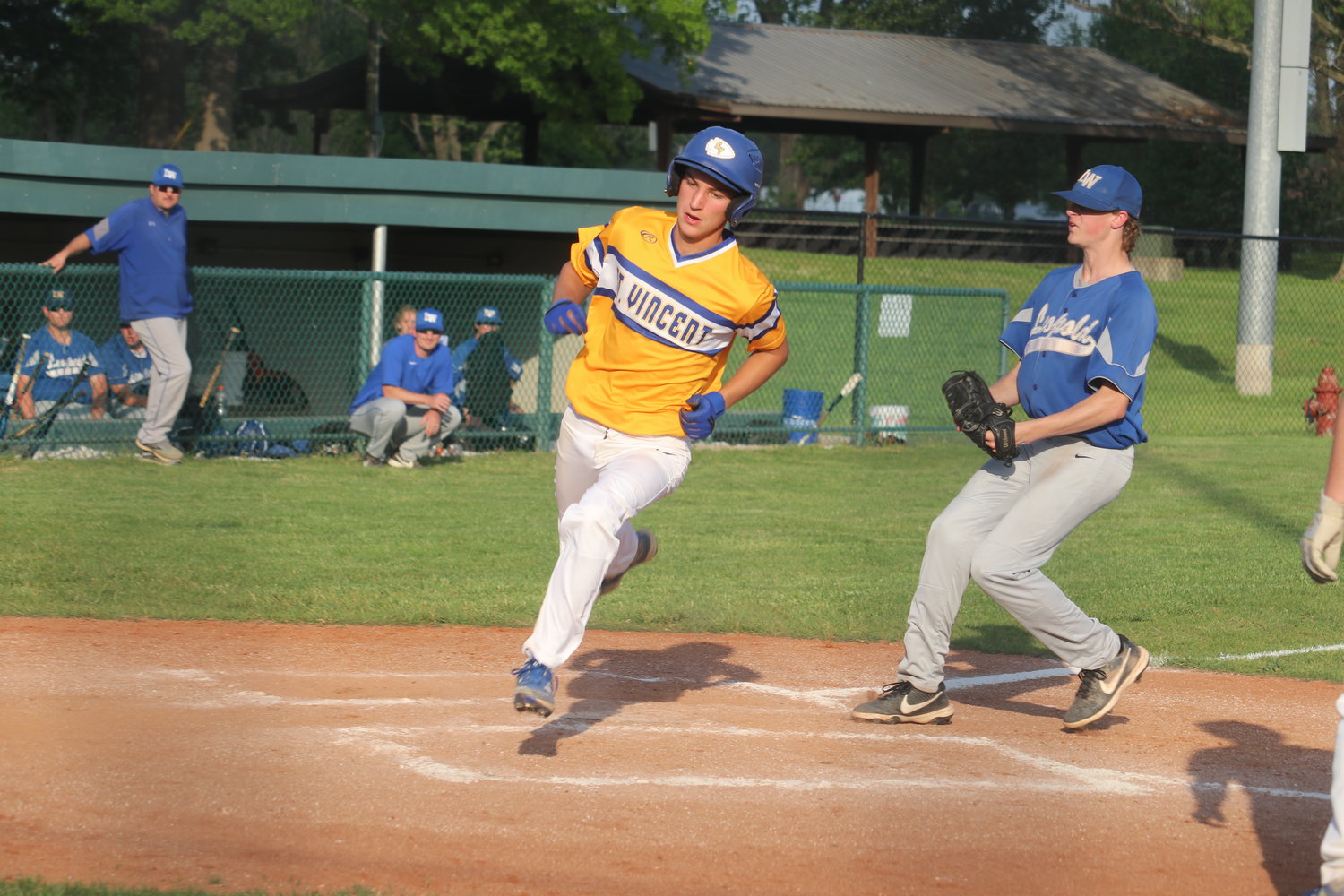 As St. Vincent baseball coach Corey Sauer took a deep breath after the game, he had one thought on his mind.
“It’s a win,” he said.
Trevor Moonier scored on a wild pitch with two outs in the bottom of the seventh for the only run of the contest as St. Vincent edged Leopold 1-0 Monday at Veteran Memorial Field on senior day.
“It’s not exactly how we draw it up,” Sauer said. “It’s a good momentum boost for us heading into the postseason.”
It was a pitching duel throughout as both teams combined for just six hits in the game (St. Vincent had five of them). The Indians could not get a timely hit to take the lead. St. Vincent (9-6) stranded a runner at third base in the fifth and stranded runners on second and third in the sixth inning with no outs.
It turned out they really didn’t need a hit to win the game.
Moonier reached on an error to start the final inning. Then after he stole second and Simon Barber moved him to third base with a sacrifice bunt and Aiden Kirn grounded out, Leopold elected to intentionally walk both Grant Abernathy and Christian Schaaf to load the bases.
That seemed like the correct move as Abernathy and Schaaf combined for three of St. Vincent’s five hits on the day, but any mistake would prove to be costly.
That is exactly what happened.
The fourth pitch of Lucas Schilling’s at-bat skipped under the Wildcat catcher and to the backstop and Moonier ran home to end the game.
“It took us a while to get something going,” Sauer said. “We have consistently hit the ball this season and getting three or four hits together to score runs. That game was definitely different for us.”
Abernathy led the way going 2 for 3 with a walk, while Schaaf, Jacob Kapp, and Simon Barber each had a hit.
While the offense took some time to get going, the Indians pitching was on point. Sauer had three different pitchers take the mound as he attempted to save his arms for the district tournament that starts later this week.
“I didn’t want to get too many guys too many pitches today with districts starting on Thursday,” Sauer said. “Hopefully we will be playing well into next week and I wanted to keep everyone as fresh as possible.”
Moonier got the start and went three inning, and surrendered the only Leopold hit, with three strikeouts. Schilling and Abernathy went two innings each, while Schilling also struck out three Leopold batters.
“I thought each of them pitched well and it was a good outing for each of them heading into districts,” Sauer said. If we pitch like that we will be hard to beat.”
St. Vincent will begin its quest for the Class 2, District 4 championship Thursday as they are seeded third and will take on six seed Valley Caledonia (4-11) at 5:30 p.m. at Veterans Memorial Field in Perryville.
Sauer doesn’t know too much about the Vikings but is confident in his own squad heading into the postseason.
“I think we can compete with anyone,” Sauer said. “We just have to go out and prove it.”