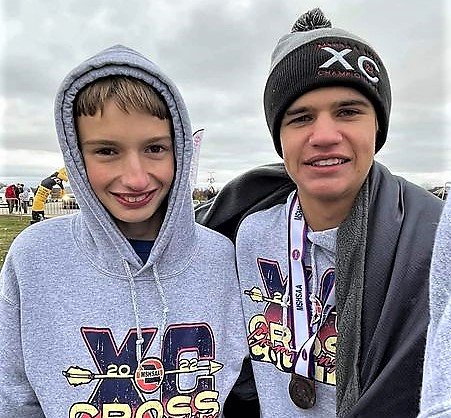 St. Vincent junior Jackson Unterreiner went to state and set a personal record for the school. Unterreiner finished 17th overall with a time of 17:26.30 at the Class 2 state meet in Columbia. The time was the fastest for any St. Vincent runner on the current state course.
St. Vincent cross country coach Emily Steele noted the conditions were really difficult because of high winds.
“When you got to the 3,000 meter portion of the race, the wind really kicked in,” Steele said. “Fortunately we had that knowledge going into the race so they could be prepared for that. Considering the elements we had where it was raining, windy and cold, he ran really well.”
Unterreiner’s time at state was slower than his district meet time of 17:18, but Steele was impressed with his finish inside the top 20.
“It’s an extreme hnor to make All-State at any time,” she said.
Steele expects Unterreiner to come back even stronger as a senior next season.
“I think he will have a strong chance to get back there barring any injuries and he is hoping to take it one step farther and break the school record of 17:01.”
Ethan Hotop finished 141st with a time of 20:06
It was Hotop’s first time at the state meet and Steele was glad he was able to gain that valuable expereince.
“I think nerves got the best of him,” Steele said. “I don’t blame him because there is a whole bunch of runners out there on the course than in a regular meet. That expereince should make him better and want to work harder to get back to sate next year.

Roth finishes 63rd
Saxony Lutheran sophomore Myra Roth finished with a time of time of 22 minutes, 48.20 seconds at the Class 2 state meet in Columbia on Saturday. The time was good enough for 63rd overall in the race
For Saxony Lutheran coach Max Weiser and Roth it wasn’t exactly the finish to the season they were looking for.
“It wasn’t what our goal was going up there,” Weiser said. “With her being a sophomore and making it to state last year, we were hoping to run better than we did last year, but the conditions were nearly as good.”


Roth finished 7th overall at the Class 2 district meet the week before, which Weiser hoped would springboard Roth to a better finish at state than she had last year, although that was not the case.
“She ran almost one minute faster at the district race than she ever had,” Weiser said. “I think it was a mixture of the weather conditions being bad. It was definitely worse for the girls in the morning and then got better for the other classes. It was by far the coldest day we have had this season. Along with that she just wasn’t feeling 100 percent that day, but even so with about 1,000 meters to go she was ahead of her pace from one year ago, and just ran out of steam.”
The plan was to start fast and get out in front of some of the lead groups of the day, which Roth achieved, until the end when she “ran out of energy” according to Weiser. Despite the tough finish to the season, it was still a top five time for Roth during the 2022 season.
“It’s hard to run your best race week after week,” Weiser said. “It was still a pretty good effort by her. I think we saw a lot of runners across all classes run a little bit slower than they usually do because of the weather.”
Roth will return as a junior and Weiser believes she will be even better next year as she attempts to get to state again.
“I think she will be hungry next year,” he said. “She was excited about the district run and while we weren’t looking for the time she ran, that will encourage her even more.”

Bishop finishes 61st
As Perryville cross country coach Shadrick Shafer put it “some days you don’t have it.”
That sentiment applied to Perryville senior Tegan Bishop who finished 61st overall at the Class 4 meet in Columbia Saturday. Bishop, who broke the girls cross country record at the state meet as a junior finished with a time of 21:12.30. Shafer and Bishop were not happy with the time for Bishop’s final race as a Pirate.
“It’s just disappointing for Tegan, Coach Brown and myself,” Shafer said. “I’m proud of her and all her accomplishments the last four years. Sometimes a race doesn’t go the way you want it to and her time was nowhere near what she was paced out to run.”
Shafer acknowledged that race conditions were less than ideal, but he offered no excuses for the slower time for Bishop.
“It was really windy, but I can’t say that was the cause of it,” Shafer said. “She just had an off day and that happens to the best of us.”
Bishop finished the season winning six races her final year as a Pirate, including the JCAA Conference meet for the second time. She finished the year with 723 total miles ran which includes training.
“It’s humbling to see someone achieve all she has,” Shafer said. “I remember Tegan back in middle school running for coach Tim Steffens and you see her become one of the top runners in the state, it’s humbling to know that I had a part of that and hopefully the rest of the team can take inspiration from that.”