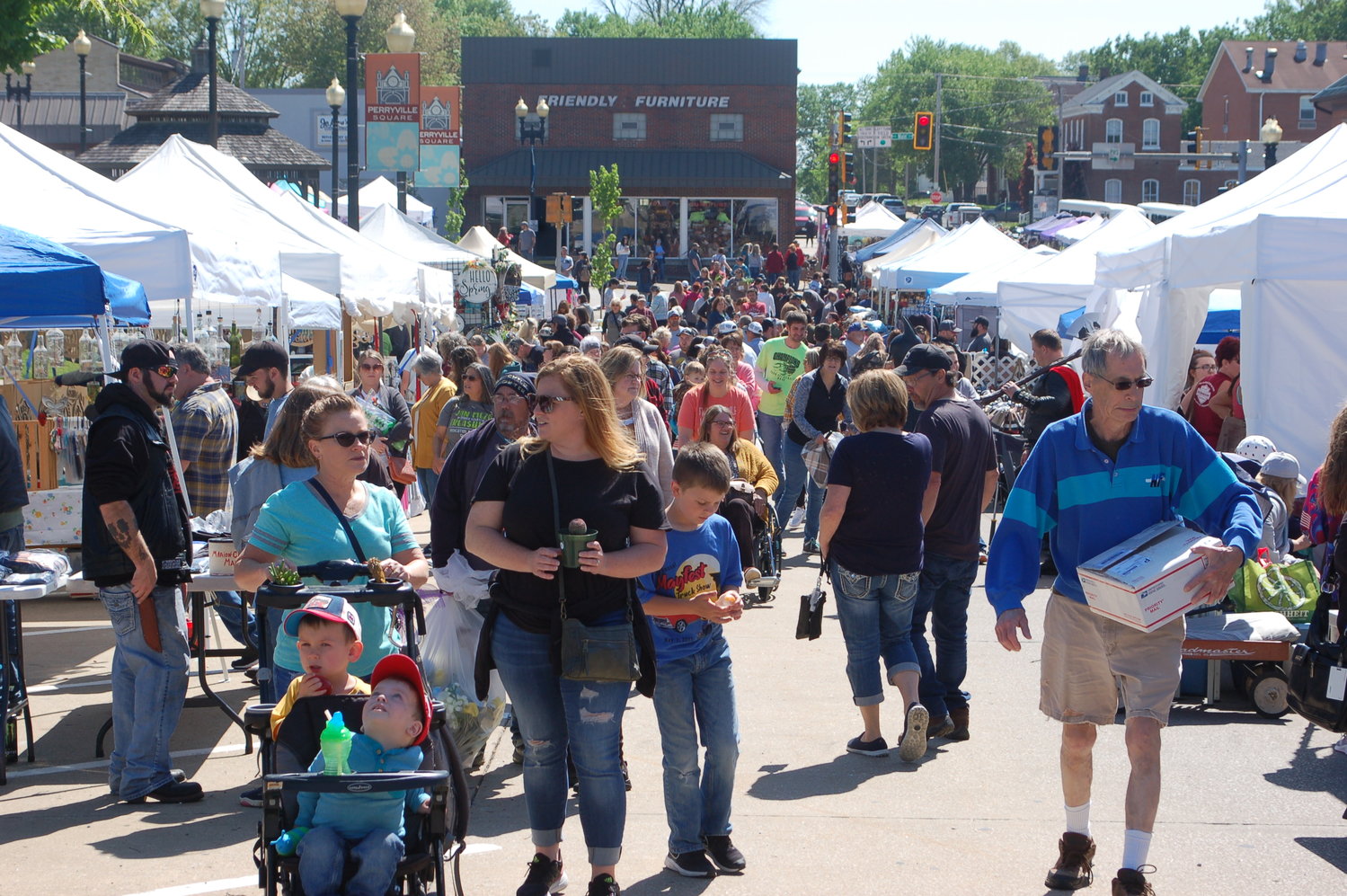 Perryville Area Chamber of Commerce Executive Director Jackie Wengert was praying that the rain stayed away from the 37th annual Mayfest. While she didn’t get so lucky on Friday, she couldn’t have asked for anything better for the rest of the event.
“Friday was definitely rough,” Wengert said of the rain that washed out much of Friday’s crowd. “Saturday was beautiful. I thought our crafters had fantastic days and our food vendors had great days. There was plenty of good people there and our music was good. Overall, it was a wonderful day.”
The one thing that Wengert pointed out was that the annual craft fair was the biggest it had been in many years. There were more than 130 stands set up for the event, the most since Wengert returned to the executive director position in 2018.
“They had some really good stuff,” Wengert said. “People were buying and you could tell that every crafter’s inventory was moving, if you walked around in the afternoon.”
The Mayfest played host to several new events, including a mountain biking and a cave exhibit on Jackson Street Saturday, while the Perryville Dance Company held a performance at the same time on the main stage.
The caving exhibit was presented by SEMO Grotto group and provided a chance for visitors to learn about the many caves in Perry County and also possibly enter into several cave classes.
The mountain biking exhibit is in place to teach kids and adults the ins and outs of biking. It is also an attempt to create an interest in the sport/hobby as Perry County attempts to expand its reach into the biking world in the near future. Funding for the mountain bike trail has been approved, there is still quite a bit of planning involved.
“I thought those two things went over pretty well,” Wengert said of the events. “We had a lot of people comment about how much they liked them.”
The 29th annual HIWAY RODDERS car show was a big hit as well, as the Knights of Columbus parking lot was filled to the brim with classic cars.
“There were a bunch of really cool cars that you don’t get the chance to see every day,” Wengert said. Even though there was a slight rain throughout the parade, Wengert felt like the event on Friday went over well. United Enterprises won first place for their parade entries. Heroes for Kids won second, and Robinson Construction took third place.
“The parade crowd was down, but the parade itself was still very good,” Wengert said.
Skye Crowley won the Mayfest coloring contest in the four and under age group, while Briella Evans won the 5-8 group, and Griffin Wheeler won the 9-12 group. It was the first time the Mayfest hosted a coloring contest. The entries colored the Mayfest logo.
“We thought that the black and white print of the logo would make something cool to color,” Wengert said. This Mayfest was the last for Wengert as the Director of the Chamber as she will retire on June 3.
“It was crazy to start and Friday was really a tough evening, so we were happy that Saturday turned out the way it did,” Wengert said. “That was a good event to go out on, now I can just sit and relax next year.