SV boys come from behind to beat Saxony in Warrior Classic 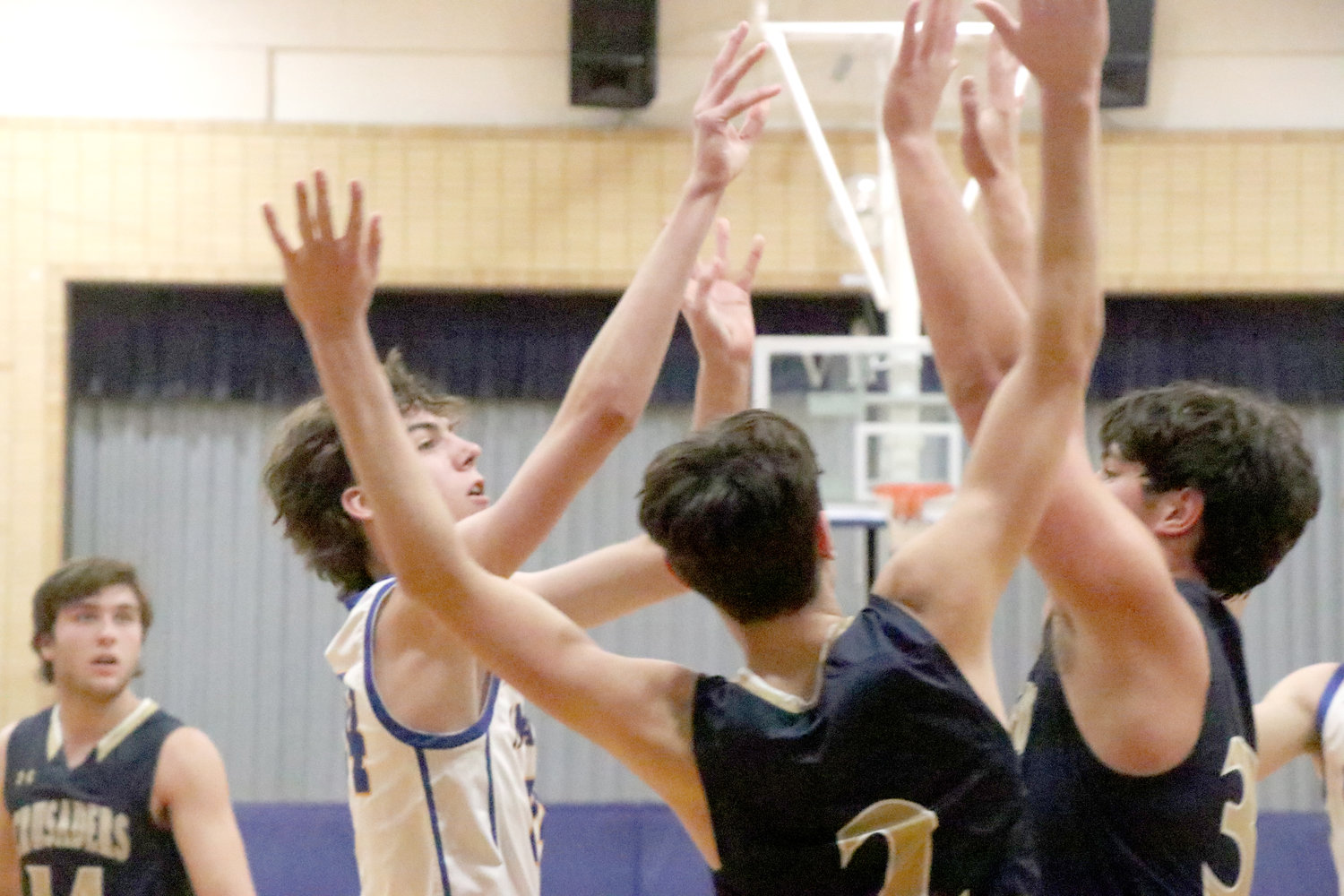 As the St. Vincent boys basketball team found out, you only have to be winning at the end of the game. Saxony controlled much of the action and was ahead for approximately 31 of the possible 32 minutes of the contest.
The one minute was all that St. Vincent needed.
St. Vincent junior Jacob Schremp made a jump shot with 36 seconds remaining to put the Indians ahead for good as they defeated Saxony Lutheran 53-50 in the opening round of the Winter Warrior Classic Tuesday.
“We battled all the way through,” St. Vincent coach Bruce Valleroy said. “It seemed like one of those games where we couldn’t get any flow. You could definitely tell we were playing at 3 p.m. on Christmas break. We gutted it out and we will take the win.”
Saxony Lutheran was ahead by as many as 10 midway through the second quarter, but for the most part the game was close as St. Vincent kept within striking distance as Saxony led 43-37 heading into the fourth quarter.
“That’s what you have to do to win games like this,” Valleroy said. “We kept it close and executed in the fourth quarter when we needed to. It seemed like every time we made a run they would always hit a big shot and had an answer.”
Luke Eggemeyer led Saxony with 21 points as John Hartmann scored 15 points. Landon Ochs scored six points.
For St. Vincent, Simon Unterreiner had 16 points and Grant Abernathy had 11. Jacob Schremp chipped in eight, and Blake Monier seven.
St. Vincent got within 43-42 after a steal and three-point play by Schremp, but Eggemeyer put the Crusaders up 47-42 after a lay-up. Eggemeyer didn’t play in the matchup between these two teams in the Crystal City tournament, one that the Indians won by double digits as he was recovering from a leg injury.


“He was hurt from soccer the first time around and this game was totally different with him in there,” Valleroy said. “He was there go-to guy and we had trouble dealing with him in the first half as he had 13 points. I thought we did a better job in the second half.”
Blake Monier nailed a jumper to pull within one point with three minutes left and Grant Abernathy splashed home a three-pointer to give the Indians a brief 47-46 lead.
John Hartmann hit a three-pointer on the next possession to go back up 50-49 with 1:45 left.
That was when St. Vincent took the lead for good.
St. Vincent stole the inbounds pass and Jacob Schremp dribbled to the elbow area and drilled what proved to be the game winning shot.
“Jacob is getting used to the speed of the varsity game and realizing what we need from him from game to game,” Valleroy said. “Hopefully that shot will give him the confidence to continue improving this season.”
Abernathy made two free throws to put St. Vincent up by three points and Saxony Lutheran had two shots from beyond the arc to tie but both Eggemeyer and Hartmann fell short. Saxony went a combined 1 for 13 from three in the game.
“We got the shot that we wanted,” Saxony coach Justin Callahan said. “It just didn’t go down. We had stretches in the game where we just didn’t play up to our potential. Whether it was missing point blank shots at the rim or throwing the ball out of bounds. I thought we controlled the game, but you can’t go 1 for 13 and expect to win.”
The game was back and forth to start as the teams traded baskets and Saxony eventually led 21-18 after the first quarter. It was the second quarter that Saxony looked like it would pull ahead as they started on a 10-3 run punctuated by a layup off a nice pick and roll from Max Richey to Eggemeyer to go ahead 31-21.However, St. Vincent battled back and was down just 33-28 at the half.
St. Vincent played top seed Kingston on Wednesday while Saxony played St. Paul in the consolation bracket.