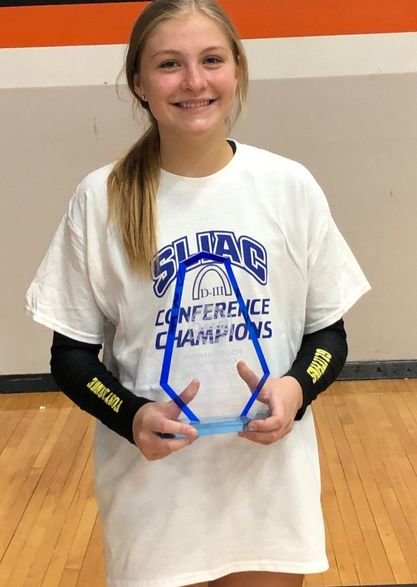 A Perryville High School alum is making noise at the collegiate level.
Fontbonne University sophomore and 2021 Perryville graduate Kristin Kaempfe helped lead the Griffins to the Division III NCAA Volleyball Tournament this fall.
Fontbonne won the SLIAC Tournament Championship for the first time since 2005 and punched its ticket to the NCAA Tournament Nov. 5 with victories over Webster University and Westminster. Kaempfe had a combined 21 kills, 8 blocks and 7 digs in those two matches.
The Griffins played top ranked Claremont-Mudd-Scripps in the NCAA Regionals Nov. 10, where they were defeated in three sets. Kaempfe had 10 kills to aid the Griffins in the contest.


Kaempfe ended the season with 225 kills in 23 matches during her sophomore season with Fontbonne, which led the team, as the Griffins went 15-11 this fall. Kaempfe had 12 games with double digit kills this season, including 17 kills in a four set victory over University of Health Sciences and Pharmacy.
In her freshman season with the Griffins, Kaempfe had 222 kills and 159 digs
As a Pirate, Kaempfe was a standout player smashing 295 kills with a school record 166 blocks her junior season in 2019. The Pirates reached the Class 3 quarterfinals falling to Windsor in three sets.
As a senior, Kaempfe had 212 kills and another 80 blocks to finish out her Pirate career.