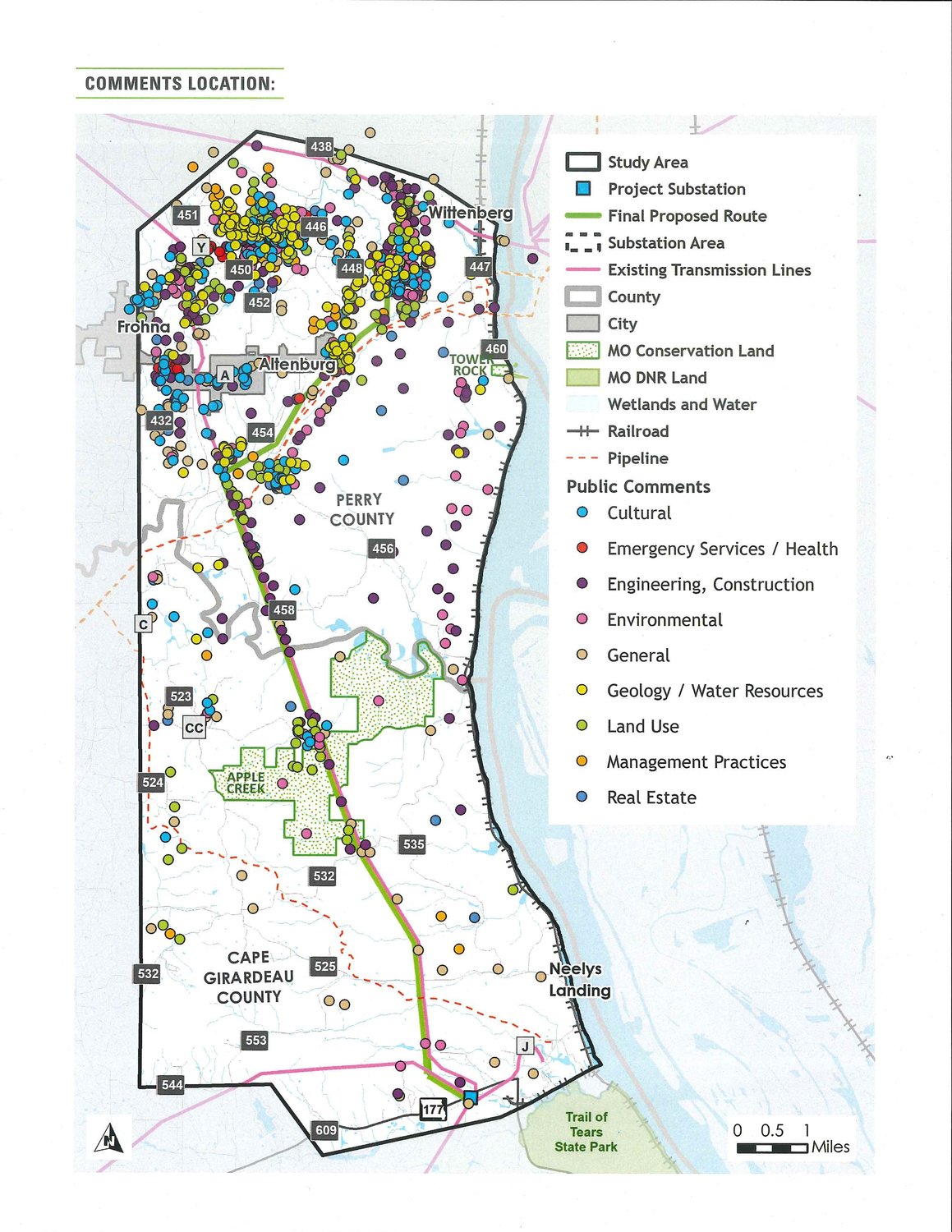 Representatives from Ameren visited the Perry County Commissioners Thursday, May 5, providing the latest on the Limestone Ridge project.
The project consists of a new 15-mile 138 kV transmission line and two state-of-the-art substations “to improve energy reliability for local communities in Southeast Missouri.”
An estimated 65 percent of the line will be located along an existing Wabash Valley Power Alliance right-of-way, according to Ameren.
“We collected data, got some public input and about some routes goes through 2020,” said Jim Jontry of Ameren. “(The work) started in the summer through the winter and then wrapped up early 2021. And then that was when we kicked off our getting picked up our case at the Missouri Public Service Commission.
In the most recent public comment period, from Jan. 11 through Feb. 1 of this year, a total of 184 comments were collected online. There were 38 attendees in a virtual public webex meeting, 44 attended via phone and 18 packets of project information were distributed in one form or another after the most recent meeting. In addition, 73 emails were received about the project, 37 left comments on a project hotline and another 10 individuals had one-on-one calls or virtual meetings with the project team.
Ameren’s first engagement summary phase began Aug. 10-24, 2020 and another one took place from Oct. 19 through Nov. 16, 2020. The second one generated 292 public comments and 68 attendees for a virtual meeting. Another 33 project packets were mailed or picked up.
“For us, the communication piece of this with the county, is extremely important, so they better understand what our timing is and what our impacts might be in the county in construction,” Jontry said. “I expect we’ll be back here a lot.”
Ameren is working along with Citizens Electric and Wabash Valley to enhance the grid, according to Jontry.
“They’re building some substation facilities,” Jontry said. We’re building the transmission line and some substation facilities and they’re all kind of interconnects together to enhance the grid, basically. They’re doing some, we’re doing some, we all kind of benefit, and ultimately, the customer benefits.”
Ameren is a multi-state corporation, serving customers in Missouri, Illinois and parts of Iowa.
“The different steps are, you know, the right away acquisition, environmental survey studies that we do,” Jontry said. “Geotechnical, that geotechnical work in this area has a big risk. There’s a lot of different types of topography and geotech underneath that you’ve got to deal with and then construction other stuff, weather when they’re gonna impact it. We’re kind of used to those challenges. Every location is different. We’ll find what is unique about this one, too.”
Feedback from the community as well as working with Citizens Electric helped Ameren work on using the existing corridor for a portion of the Limestone Ridge project.
On the project timeline for 2022 include engineering and permitting, field surveys, real estate acquisitions, pre-construction activities and substation construction.
Construction is scheduled to be completed in 2023 with the scheduled in service date of December 2023.
An application to the Missouri Public Service Commission was submitted to the Missouri Public Service Commission in April 2021. Later last year, in November 2021, the PSC approved a final route and issued a “certification of public convenience as necessity” for the Limestone Ridge Project.
A detailed engagement summary was presented to the commission May 5, which included comments by type, including land use, 403; general, 300, property impacts, 163; hunting/fishing, 66; wetlands and water usage, 57; information request, 48; cultural resources, 38; construction, 31; wildlife, 27; property values, 21; public involvement, 15; endangered species, 13; proximity to homes, nine; visual aesthetics, nine; project need, five; mapping request, five; routing, five; Ameren, three; EMF, three; cost, two; vegetation management, two; and noise, mailing list, real estate and safety, each with one.
Most of the comments were from those near Wittenberg as well as along Perry County roads 450, 446 448 north and east of Altenburg as well as near PCR 454 south of Altenburg. A number of commenters were from east of Frohna near Highway Y which is in the vicinity of an existing transmission line.
The approved route of the new transmission line would go from west of Wittenberg in a southwesterly direction near Perry County Road 454 and just east of Highway C meet up with an existing transmission line and begin heading south, crossing Apple Creek, Highway CC east of New Wells, the Apple Creek Missouri Conservation Land and ending up at a new substation on Highway 177, southwest of Neelys Landing.
Presiding Commission Mike Sauer understands the concerns from residents. However, with the approval of the proposed route by the PSC, the route apparently is final. Moving forward, Sauer is hopeful the feedback from local residents will be taken into consideration. Ameren officials reported May 5 that not all of the property easements have been acquired, and this remains something they are still working on.
District 2 Commissioner Keith Hoehn has field calls from residents about the project, and his preference is to see the line have as minimal an impact on residents as possible. One individual expressed concern about the use of heavy machinery on a paved roadway.
The typical 138kV steel monopole structures are an estimated 100 to 160 feet tall with a span of 800 to 1,000 feet. There are an estimated six to seven structure per mile installed on a drilled concrete pier seven to 12 feet in diameter. An estimated two feet of the foundation is about the ground and the easement width is 125 feet.
Ameren was last at a county commission meeting in January of this year.