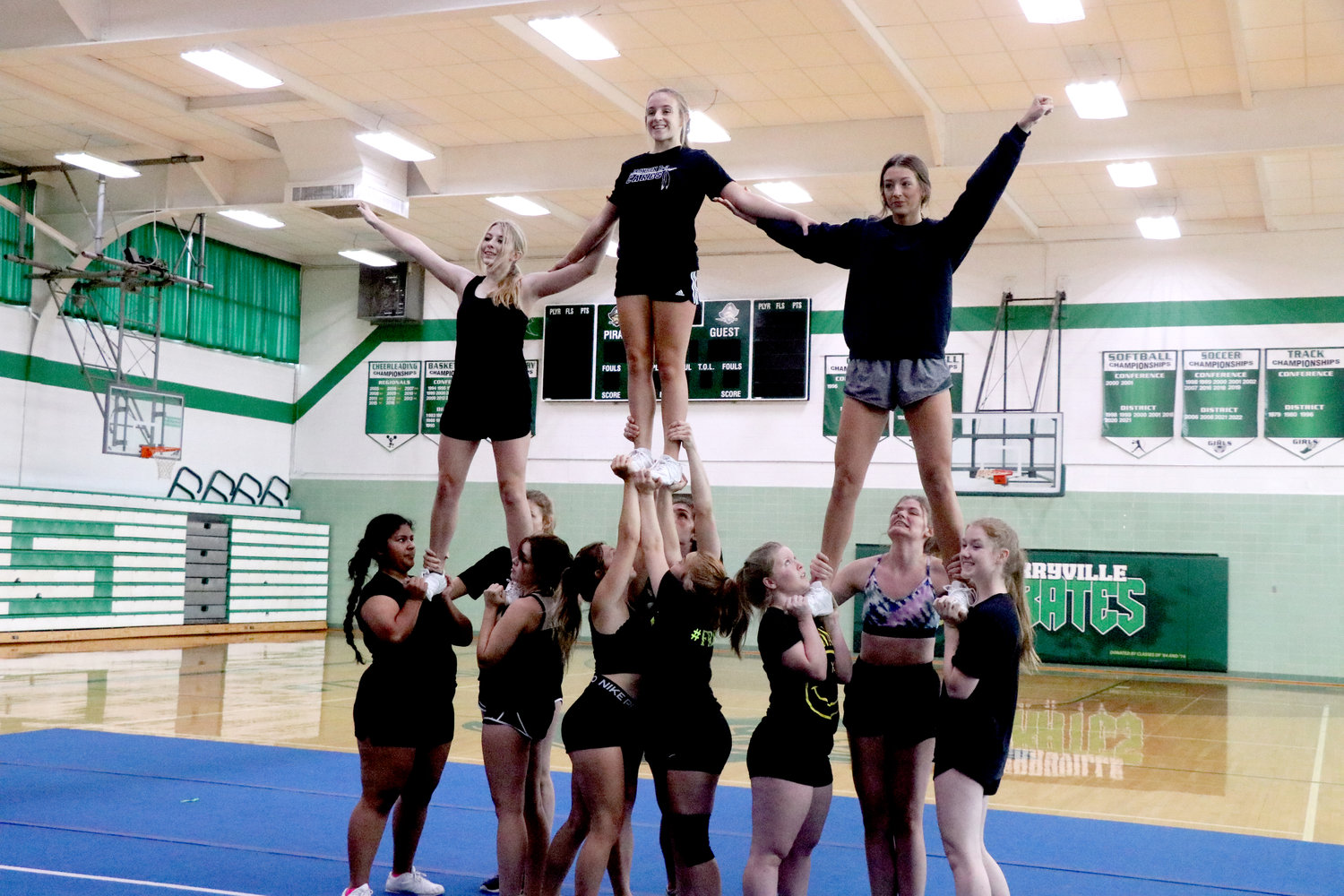 Just like all the other sports, the Perryville High School cheerleaders were hard at work preparing for the upcoming fall and winter seasons.
To help with that, the squad welcomed in Evelyn McHaney of the National Cheerleading Association to help the girls with different aspects and training techniques.
“We do different camps where we focus on different things such as jumps, tumbling, motions and stunts,” McHaney said. “We are just getting them ready for football games, sideline competitions with a cheer routine and a band chant routine as well. NCA also hosts competitions such as nationals.”
That will be the case for the Perryville cheerleading squad as it was announced that they had qualified for the competition through NCA. The event will be held January 21-22 in Dallas, Texas.
The team will perform in crowd, performance or the gameday division.
It will be the first time in a few years that the Pirates will enter a competition. So much so that senior and co-captain Taylor Collard is the only member to actually participate in an event of that nature.
Collard competed in several competitions from fifth to eighth grades, and hopes to be able to garner some of that experience at the high school level.
“It was pretty cool,” she said. “You don’t really know that you’re competing when you are on the stage. It’s a really big adrenaline rush. We did a lot of stunts this week that we have never done before.”
Senior co-captain Brianna Kimmit noted that although she never competed before, she has been cheerleading since the sixth grade.
“It’s a little scary being up there and having someone judge you,” Kimmit said. “But I think I have overcome my fear of it.”
Over the course of the camp, McHaney saw improvement from each member of the squad during the week.
“I saw a lot of improvement from the members of the squad,” she said. “They worked together as a team and improved their motions they have been working on all week.”
For Kimmit, she also saw her team grow together.
“I think that is something that is big in cheer,” Kimmit said. “We have to be able to trust each other when we do pyramids and different stunts.”
To go along with its invitation to the national competition, the Pirates also had three All-American cheerleading honors in a special judging Friday afternoon by McHaney. Collard, Kimmit, and Xavier Pfaff each earned the recognition, which will allow them to travel the country.
To help fund the program and raise money for the competitions, the Pirates will host a bake sale on July 30 at Roziers and a car wash fundraiser on Aug. 13 at Perryville’s Auto Zone from 9 a.m.-2 p.m.