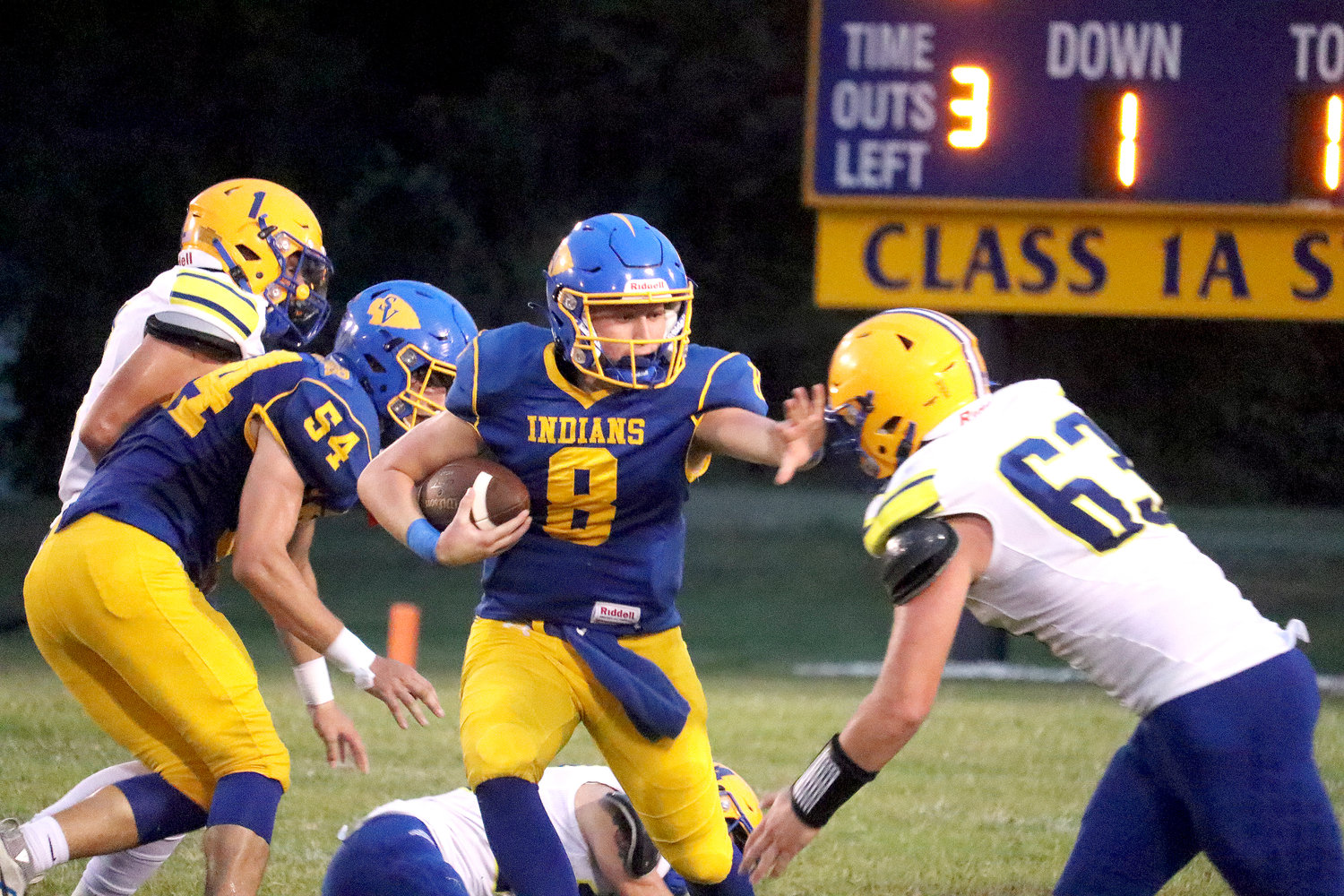 As St. Vincent football coach Tim Schumer said that is has been a while since the Indians have started a season 2-0.
He can add 2022 to that list.
Junior quarterback Christian Schaaf had a big night with three touchdown passes and another on the ground in the Indians 36-22 victory over Scott City at St. Vincent High School.
It is the first time St. Vincent is 2-0 for more than a decade.
“One thing is he did not turn the ball over,” Schumer said. “That’s the thing we want to focus on, making sure we limit mistakes. We won the turnover battle and a lot of times., when you win the turnover battle you win the game. I thought he made some good decisions, trusted in some receivers down there in the end zone, trusted the guys go and make plays and they took care of business.”
Schaaf went 8-19 for 193 yards for three touchdowns, he also ran for 104 yards, which led the Indians.
It didn’t start out positively for St. Vincent as a bad snap just two snaps into the game that went into the back of the endzone and Schaaf kicked it out for a safety.
“We didn’t start out of the hottest, but we always preach a ‘focus on the next play’ mentality,” Schumer said. “You’ve just got to put that one behind you. It was a smart play by Christian, getting it out of the endzone.”
From there St. Vincent took control. Sophomore John Schwartz intercepted a Mark Panagos pass and Schaaf converted the turnover into a short touchdown run. The Indians scored again on an 85-yard touchdown pass from Schaaf to Trevor Moonier to give St. Vincent a 12-2 lead.


Moonier led St. Vincent with three catches for 114 yards and one touchdown.
“Trevor made a fantastic catch and then took off and scored,” Schumer said. “That kind of broke it open for us and kind of gave us some breathing room.”
That breathing room didn’t last long as Scott City scored twice in the second quarter on a 60-yard touchdown pass from Dustin Keller to Gavin Venable and Panagos scored with a 10-yard run to give the Rams a 15-12 lead.
Scott City made a key mistake near halftime that flipped the game in St. Vincent’s favor. A tipped pass fell to Drake Robinson. Mason Light cashed for the Indians with a three-yard touchdown run to give St. Vincent a 19-15 lead with seven seconds before half.
St. Vincent added two more touchdowns in the third quarter with catches by Jacob Schremp and Kaden Kassel to give the Indians a 36-15 lead.
The Rams made a bit of a come back after a bad punt and Scott City’s Tyson Underwood scooped up the ball and ran it seven yards into the endzone.
The Rams recovered an onside kick, but failed to capitalize on any further opportunities.
St. Vincent (2-0) will take on Perryville (0-2) Friday in week 3 at Pirate Stadium.
“It’s great for the community because of the atmosphere every year we’ve played,” Schumer said. “”It’s been awesome. We pack the crowds and it’s a fun Friday night feeling.”