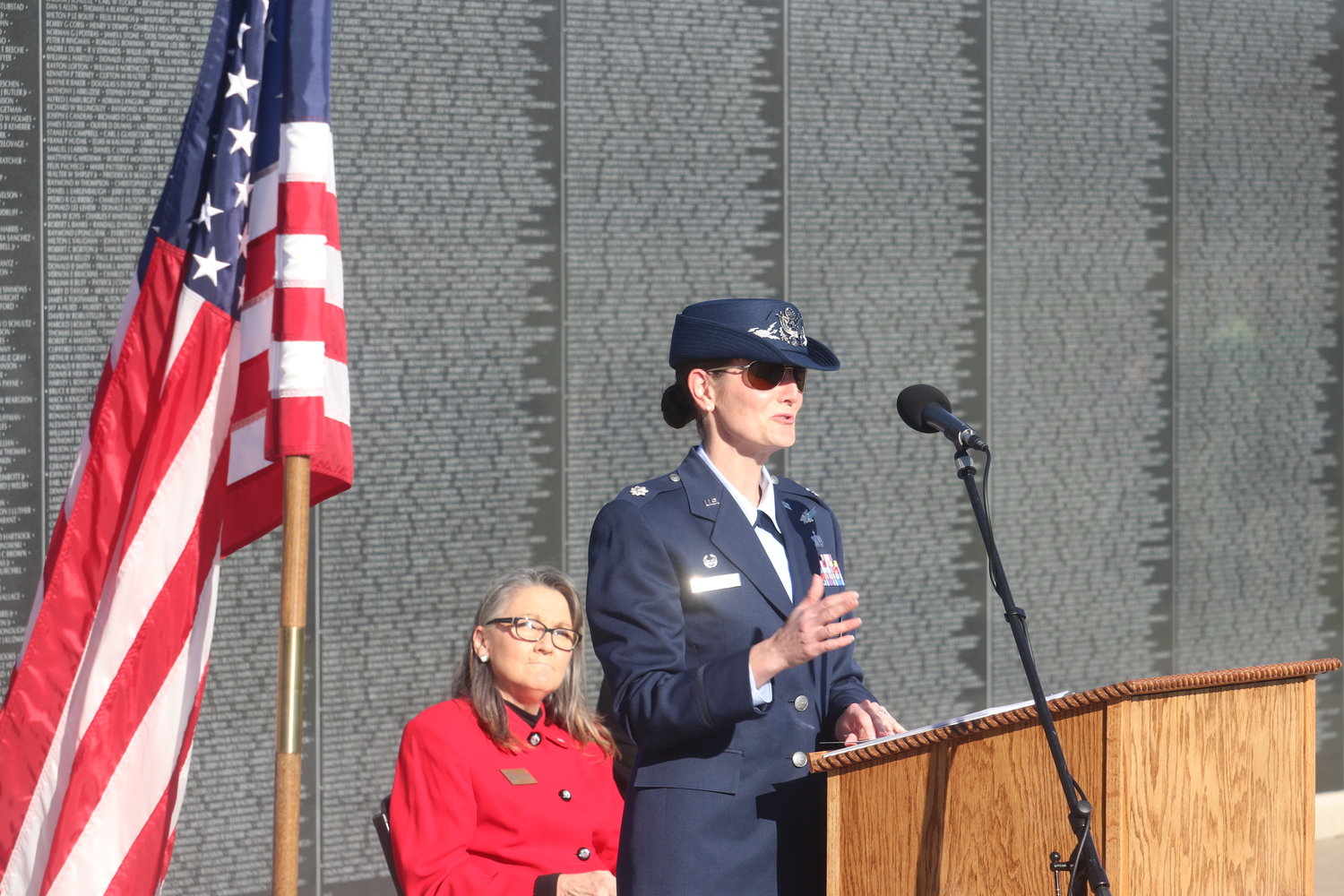 For Lieutenant Colonel Jessica H. Dwyer, the keynote speaker during the Missouri National Veterans Memorial’s Veterans Day ceremony Nov. 11, the focus was on responsibility.
So much so she opened her speech with a quote from Sigmund Freud.
“Most people don’t really want freedom, because freedom requires responsibility and most are frightened by responsibility,” Dwyer said. “However today we say thank you to those men and women who serve in our military and those who were laid to rest, because they were not afraid of responsibility.”
Dwyer said the United States armed forces have a big responsibility to uphold.
“If we fail, a monarch is not overthrown, our democracy is finished,” Dwyer said.
Dwyer’s grandfather spent time in the Pacific during World War II, but her first memory of an interaction with a service member came at a young age.
After a ceremony for the Garden State Games, a big youth soccer tournament, Dwyer was heading back to her car when she spotted a soldier in the parking lot. She walked up to him and told him that she would be serving next to him one day.
“I couldn’t tell you how many goals I scored or where we placed in that tournament, but the fleeting memory of that man is something I will never forget.
Dwyer is the Commander and Professor of Aerospace Studies for Air Force Reserve Officer Training Corps Detachment 205 at Southern Illinois University, Carbondale, Ill. She leads all training, education, assessment, and recruitment of prospective Air Force and Space Force Officers enrolled at the university as well as students enrolled at Southeast Missouri State University and John A. Logan College. She credits her father with the installation of patriotism in her life and is something that she still holds with her today.
“At a young age I had respect for anyone in uniform, whether that’s a police officer or anyone of service,” Dwyer said. “That reverence grew to a desire to give back to those who gave parts of their life to defend this nation and those who paid the ultimate price to preserve our rights and freedoms.”
She understands that being in the military offers plenty of hardships, including moves around the country. Dwyer’s daughter is only seven, but has lived in six states.
“They have missed birthdays, weddings, and the birth of their children,” Dwyer said. “I was deployed for six months when my oldest daughter was two years old and it stunk. Some of you have moved countless times, forcing family members to scrap close relationships because the next move is right around the corner.”
Much like herself, Dwyer hopes that her service can inspire a young child to defend their country if they so please.
“When they see a person in uniform, I hope they see courage, loyalty, and integrity,” Dwyer said. “Because of these young men and women these flags will continue to fly and send a message that the armed forces do not fear responsibility to honor those who served before us.”