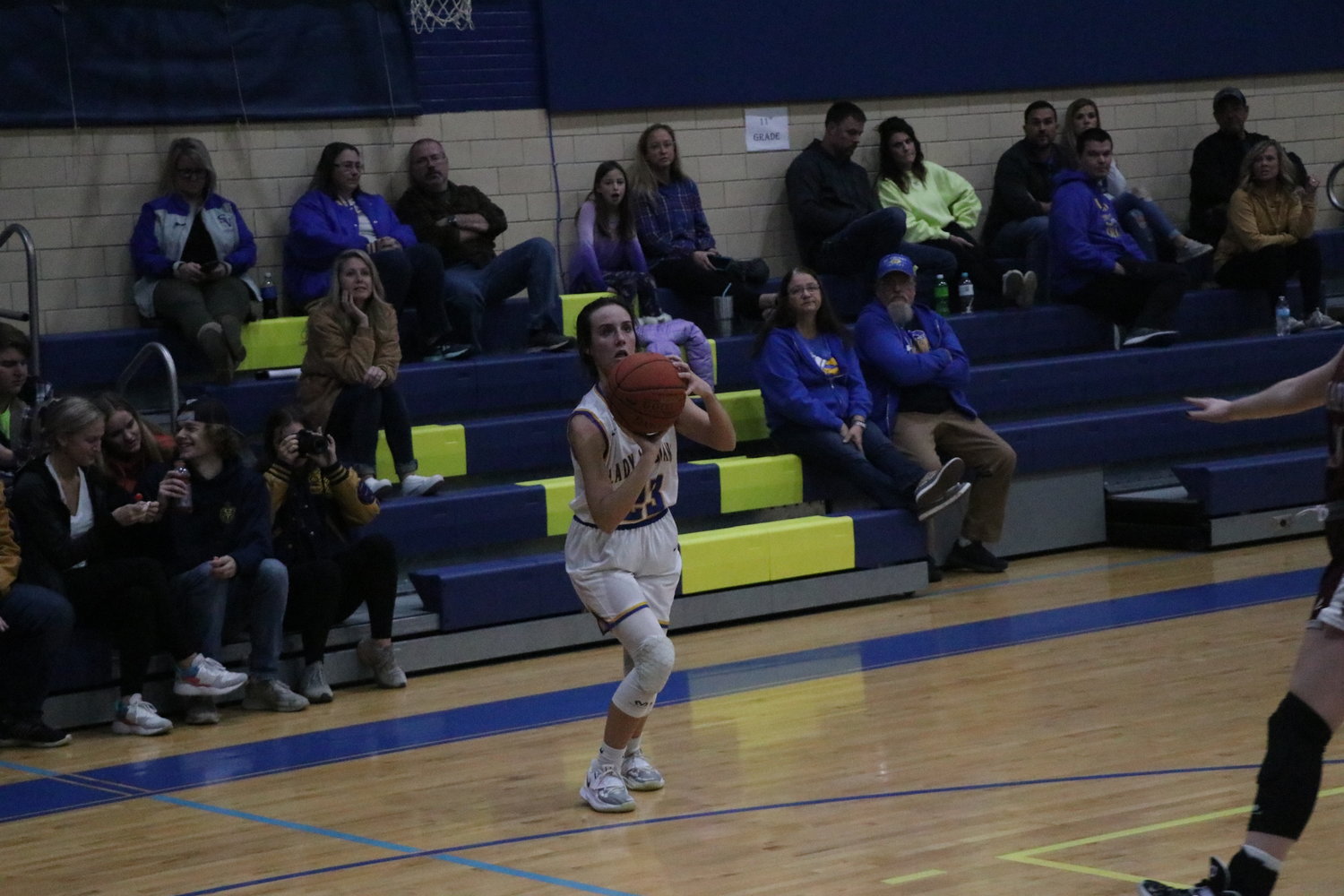 The new year started off on the right foot for the St. Vincent girls’ basketball team. The seventh-seeded Indians upset second-seeded Advance 67-47 in the opening round of the Delta New Year’s tournament on Monday at Delta High School.
The victory for St. Vincent avenged a double-digit loss earlier this year to Advance.
“We came out and played a very good game,” St. Vincent coach Mel Kirn said. “We’ve been on a roll now and played well for the last 12 quarters or so. We have been in a great groove.”
Advance came into the game shorthanded as they were missing their starting point guard due to an injury and had several players drop out of the program around Christmas.
The Indians took advantage.
St. Vincent senior Reese Barber came out on fire in the first quarter, scoring 11 of her team-high 23 points to open the game.
“The girls came out and moved the ball around so smoothly,” Kirn said. “All five of my starters came out and were right around double-digits scoring wise. That is one of the first times that has happened all year.”
Allie Patrick had nine points and nine assists, while Barber also dished out six assists.
Sharing the ball has been a big part of St. Vincent’s current three game winning streak.
“They were all looking for each other,” Kirn said. “We don’t care who scores as long as the ball goes into the basket at the end of the possession.”
Caliyn Prost had 12 points, including 10 in the third quarter, while Addie Cates added 10.
The third quarter was the turning point for the game. The Indians outscored the Hornets 23-9 after halftime, and came out hot, scoring the first five baskets in the quarter. With about three minutes to go in the third quarter, Advance had a player foul out and the Hornets were forced to play the rest of the game 5-on-4.
“We were boxing out really well and got her in foul trouble and to eventually foul out,” Kirn said.
Kirn noted that he rarely sees a team play 5-on-4, but it didn’t really change his team’s outlook on the game. At one time the Indians were able to stretch the lead to as many as 28 points in the second half.
“We just kept running our offense,” Kirn said. “We didn’t press all night and because Advance was so shorthanded, they didn’t either. We played well together. We controlled much of the game after the first quarter.”
Alandry Below scored 27 for the Hornets to lead all scorers, but only had four in the third quarter when St. Vincent took over the game. Kaylee Cline was the only other Hornet in double figures with 11 points as Advance had only four players record points in the contest.
Below had 35 points in the first game of the season against St. Vincent, a 14-point Advance victory, but Kirn felt like his squad did a better job against the Hornet’s best player the second time around.
“She didn’t get very many layups like she did in the first game,” Kirn said. “She had a lot of pull-ups in the paint. If they had their point guard then maybe it would have been a tighter game, but this is a different group of girls than that group that played at the beginning of the year.”
St. Vincent (5-5) played third-seed Meadow Heights (9-2) on Wednesday in the semifinals.