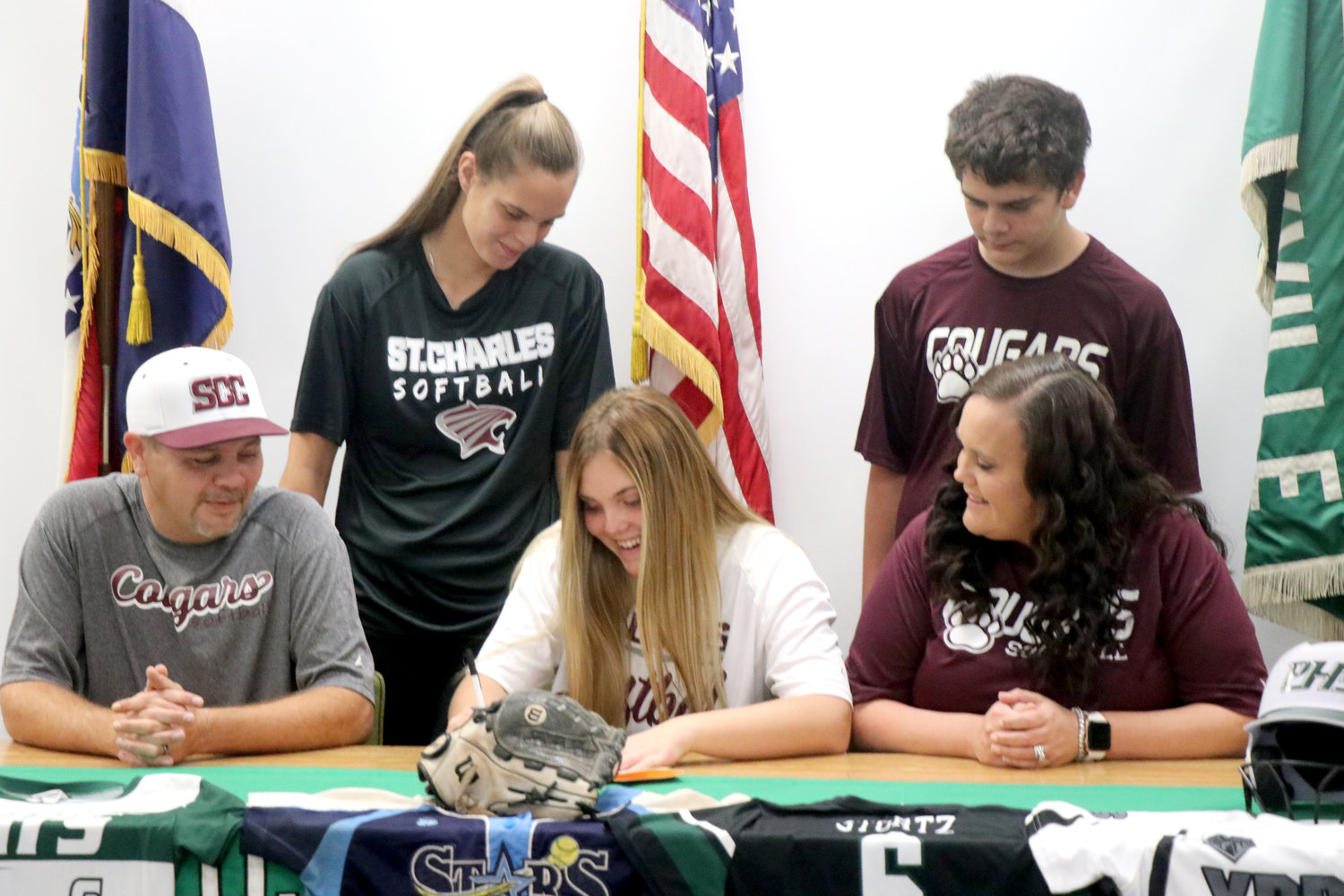 Alyson Stortz’s dream became a reality.
The Perryville senior pitcher signed a letter of intent to play softball at St. Charles Community College in the Perryville library among family and friends Tuesday.
“It’s extremely exciting to move on to the next chapter of my career,” Stortz said.
Stortz was the bonafide ace for Perryville the last two seasons as she had over 200 strikeouts her junior and senior seasons. In her final year as a Pirate, Stortz complied a 1.88 earned run average, while pitching in 21 games this season (19 starts). She struck out 209 batters in more than 126 innings pitched and eclipsed the 500-career strikeout mark this season.
St. Charles Community College Coach Dustin Wengert, coached Stortz at Perryville for two years and is excited to coach her again at the college level.
“If we can get just half of the player she was in high school, we will be ok,” Wengert said. “Coaching her for the two years at Perryville, she was able to step into a major role already as a sophomore and led us to a good season. She is just a bulldog and if she continues to work as hard as she is and does the things that we ask of her, the sky is the limit for Alyson.”
Executing pitches and playing the game itself, won’t be that much different for Stortz as she takes her game to the next level. What will be different is that she will not be throwing to her sister, Kylee, who has been behind the plate for the last few years and will return to Perryville next fall as a senior.
“It’s very emotional,” Stortz said of moving on to college without her sister. “She has been back there for what seems like forever. We have a great bond on the field together and I’m hoping she can come play with me.”
How strong is that bond?
“Usually when she comes to talk to me in the circle, it’s for me to get my act together and pitch better,” Stortz said. “Sometimes she comes out to calm me down if she can tell that I’m nervous. She talks me through a lot of stuff.”


Wengert hopes that Stortz can add depth to his pitching staff.
“You are always looking for pitching,” Wengert said. “We brought in two freshmen and signed another two in this early signing period so we have four on the docket for next year. With us playing double headers every day and playing six to eight games in a week, you need those arms. I’m a big believer in not running the same girl out there time and time again. In May, I want them to be fresh.”
Wengert is “open to the idea” of Stortz also taking some at-bats this fall as well. At the plate, Alyson Stortz had a .449 average with one home run, 13 doubles and 16 runs batted in this fall.
“We are going to give her the chance,” Wengert said. “However, her mentality has to be pitcher first and if she gets to swing it, then she will.”
Stortz was named Second Team-All-Region this past fall and first team All-Conference as a senior. As a junior she helped lead Perryville to its first ever trip to the Class 3 Final Four and was named All-State. She will remember her time as a Pirate findly.
“I wouldn’t take anything away from my time here,” Stortz said. “If I could do it all over again, O would in a heartbeat.”
However, he is ready to try her game at the college level.
“I can’t wait to get there and get to work,” she said.