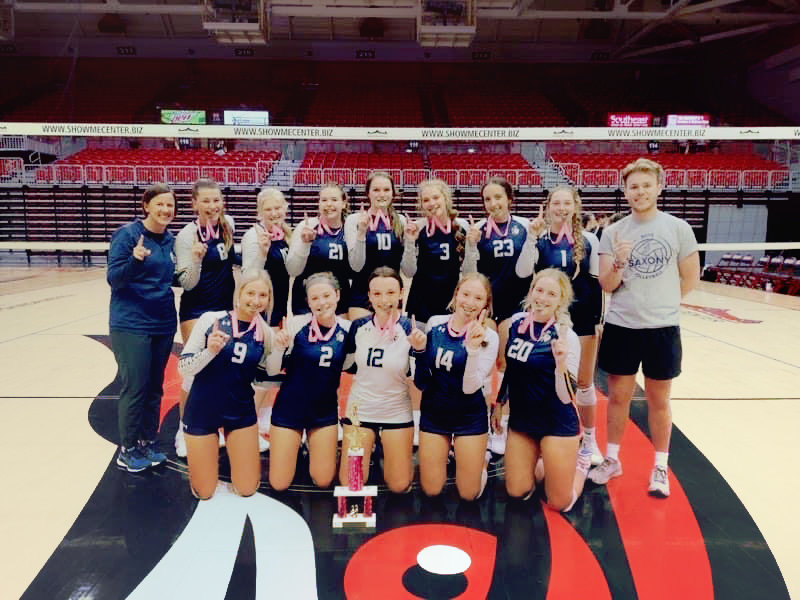 It has been five days and Saxony Lutheran volleyball coach Stephanie Brown still doesn’t believe it.
Her Crusaders took first place at the Dig for Life Challenge at the Show-Me Center in Cape Girardeau Friday.
“It’s hard to explain. I’m still kind of speechless about it,” Brown said. “I’m so proud of those girls because they fought with everything they had and we were up against some very tough teams.”
Saxony finished 3-0-1 in pool play defeating Park Hills Central, Jefferson R-7 and Gideon while tying South Iron before reach bracket play. The single set to South Iron was the only one that the Crusaders lost throughout the tournament.
“The girls had a lot of fire in them,” Brown said. “There were multiple sets where we were down five or six points and we would not give up and kept crawling their way back. They finished strong.”
Saxony swept Northwest (26-24, 25-17) and Farmington (25-19, 25-18) to claim the championship. In all the Crusaders played seven matches in two days.
“That shows the drive and desire that the girls had to be better and play hard,” Brown said. “They are just enjoying themselves right now and it’s fun to be a part of.”
Brown noted the championship run was a team effort.


“We hit well and blocked well,” Brown said. “Looking back at some of the matches our defense and ability to block at the net kept us in most of the games. It was a collaborative effort by everyone on the team.”
Saxony (9-0-1) was unbeaten in three matches heading into the tournament and Brown was curious to see how her team stacked up against some of the top competition in the area. Out of the seven matches played, three of the teams made it to the state final four last season.
“I was curious to see how we would do,” Brown said. “When you play in tournaments the goal is to win. It wasn’t expected, but as the day went on we kept playing better and better and I felt like we had a shot. When we got to that last game, the girls said they didn’t come that far to lose.”
Brown hopes the tournament victory can keep the team’s momentum going in the right direction.
“The tournament victory is great, but we want to stay focused on the task at hand and what is in front of us,” Brown said.