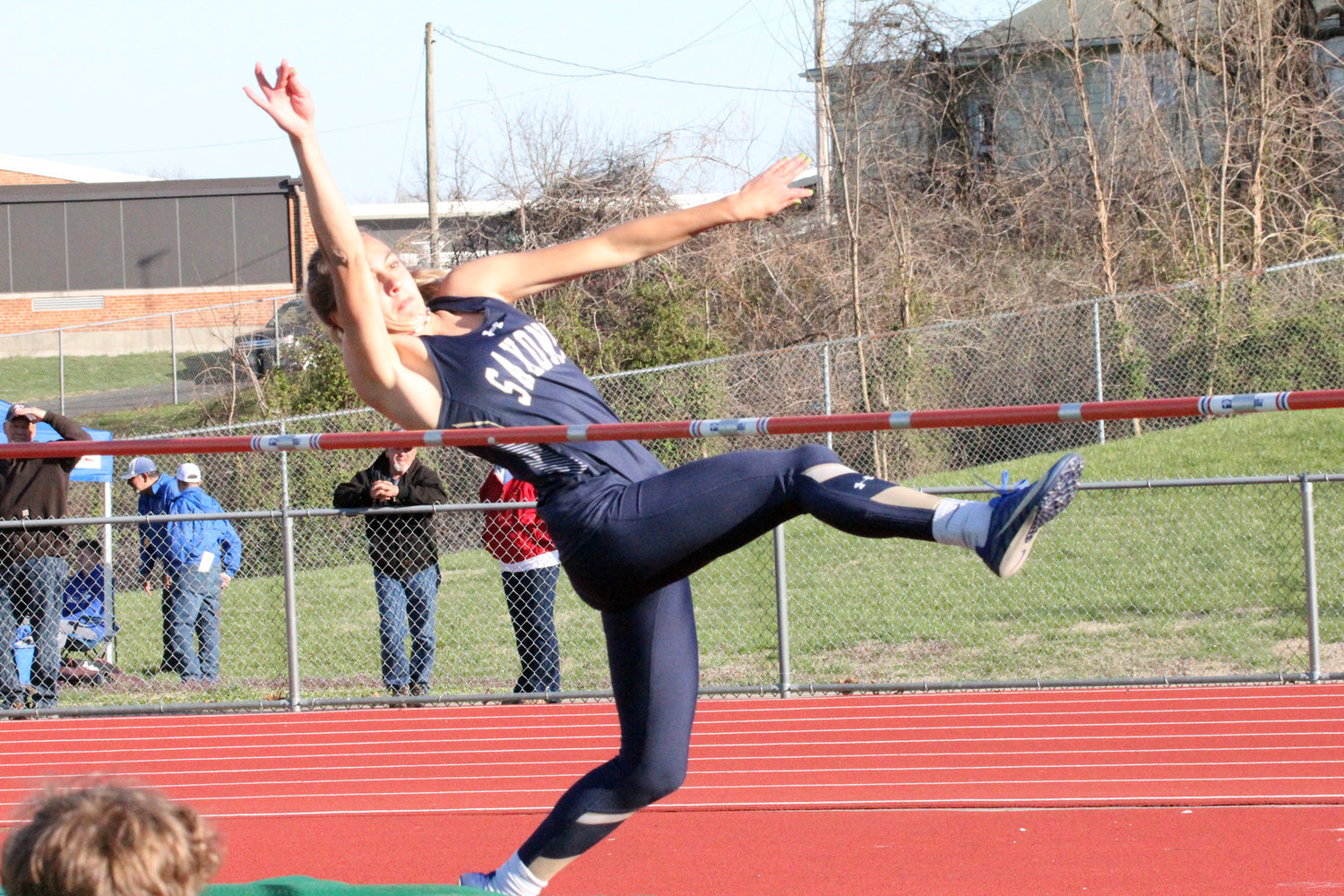 To say that the Saxony Lutheran track team had a good day at the Class 2, District 1 meet, may be an understatement. The Crusader girls finished second overall as a team (116 points) behind Grandview.
More importantly for Saxony, the Crusaders will send 12 athletes to the Class 2 sectional after competing at Hillsboro on Saturday.
“We had a lot of athletes score well and a lot of fifth place finishes, and a lot of others that were just few spots short from qualifying,” Saxony coach Max Wieser said. “We had a good performance all all-round.”
Anna Thomason and Isabella Deckerd led the Saxony Lutheran girls to a second-place finish at the Class 2 District 1 championships. The two combined to score more than 60 points for the Crusaders.
Thomason picked up district championships in the triple jump (35 feet, 8 inches) and 100-meter hurdles (15.50 seconds) while Deckerd won the 200-meter dash (26.31 seconds). The Crusaders’ 4x100-meter relay team (Deckerd, Thomason, Ava Brown, and Bianca Scholl) rounded out Saxony’s champions on the girls side (51.99).
Outside of winning an event outright, athletes had to finish in the top four of an event to qualify for sectionals.
Deckerd also qualified in the 100-meter dash by finishing third (12.99) and the long jump with a third-place finish (16-7.25), while Thomason finished second in the high jump (5-2.25)
“Anna and Isabella had really big days,” Wieser said. “They have been our most consistent athletes, who have some special abilities. They seem to rise to challenges very well.”
Outside of Deckerd and Thomason, Rebecca Yunck finished second in the pole vault (7-7.25) and fourth in the javelin (92-9.0). Myra Roth also qualified in the 3,200-meter run with a fourth place finish (13:43.28) The girls 4x200 meter relay (Kennedy Lewis, Abigail Haley, Bryanna Hale, Timora Criddle (2:00.64) finished fourth to move onto sectionals as a group. Hale also finished third in the 100-meter dash with a third-place finish (18.14).
The only male athlete to qualify for sectionals for Saxony was Landon Ochs. He finished first in the high jump, tying Charleston’s Fletravion Stanback, with a height of six feet.
“He’s a natural talent,” Wieser said. “I convinced him to try the high jump and he has really bought in the last month of the season.”
Saxony will compete in the Class 2 sectional round on Saturday at Lutheran North High School.

The St. Vincent boys and girls’ track and field team didn’t have any individual champions on Saturday, but still managed to finish third and fifth respectively in the Class 1 District 1 track and field championships at Hillsboro High School.
However, that didn’t mean that there won’t be any athletes moving on to sectionals.
All a person has to do is look at the relay teams. St. Vincent will send four boys relay teams to the Class 1 sectional next week.
The 4x400 (Ethan Leible, Dane Kline, Clayton Gremaud, Trenton Heine; 3:54.72) and 4x800 teams (Leible, Ethan Buerck, Jackson Unterreiner, and Gabreil Anders; 9:07.47) finished second, while the 4x100 (Heine, Unterrenier, Buerck, and Carson Leible; 49.60) and the 4x200 team finished fourth (Kline, Gremaud, Leible, Unterreiner; 1:40.11).
Individually, Unterreiner finished third in the 1,600 meter run (5:01.28), while Buerck finished fourth in the 800 meter run (2:17.90). Christian Layton also finished third in the javelin to move onto the sectional round (125-8.0).
On the girls side, Aiden Blessing finished second in the high jump (4-6.0), while Sophia Martin finished fourth in the 3,200 meter run (15:50.53).
Reese Zoellner will move on in the pole vault with a fourth place finish (5-1.75), while Claire Otte finished fourth in the shot put (29-11.25). St. Vincent will compete in the sectional round Saturday at Lutheran North.