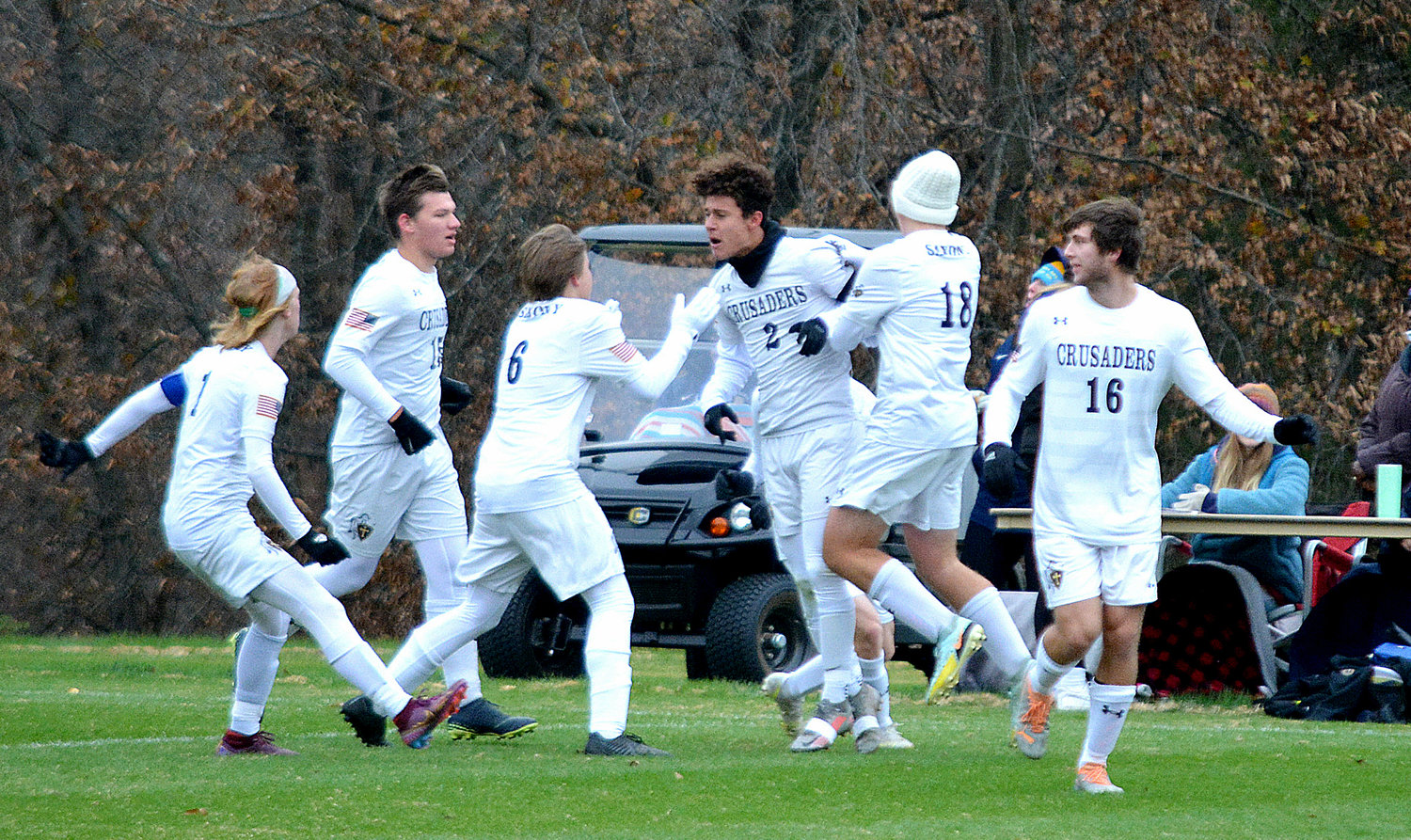 The season didn’t end exactly how they wanted it to.
The Saxony Lutheran Crusaders boys soccer team fell 3-2 in overtime to Excelsior Springs in the Class 2 third place game at the Wide World Technology Soccer Complex in Fenton Saturday. Saxony took fourth in Class 2 for the first time in program history.
For Saxony Lutheran coach Chris Crawford, it was a sour way to end the season, however, he still felt like his team played well at state, especially in the third place game, despite the fact that it wasn’t for a championship.
“We talked before the third-place game that we came up there to do a job,” Crawford said. “Even though the goal had changed from playing for a state championship to third place, he still wanted to take care of business. I thought that the third-place game was just as spirited as the semifinals. It can be a tough challenge to gear up for, but I thought both teams met that challenge.”
Saxony struck first on a goal by Brayden Moore eight minutes into the contest as they took a 1-0 in halftime. Excelsior Springs scored a pair of goals eight minutes into the second half and Saxony answered with another by Max Richey with 13 minutes left in regulation.
Excelsior Spring scored on a redirection on a corner to secure third place.
“It was just one of those things where we were trying to alert one of our defenders that there was someone on the back post and he couldn’t hear us,” Crawford said.


The Crusaders fell 2-0 to Orchard Farm on Friday in the Class 2 semifinals as Eagles’ Brock Williams scored 35 minutes into the game and then Orchard Farm scored again for an insurance goal late in the contest as the Crusaders were pushing for a tying goal.
Crawford felt like the two teams were pretty even.
“I thought the game could have gone either way,” he said. “A goal for them came really late when we were trying to equalize. We had a bunch of opportunities to finish shots. Orchard Farm really only had two opportunities to score and they capitalized on them.”
Saxony (15-11) had a flair for the dramatic this postseason as the Crusaders played three overtime/penalty kick shootout games/ Saxony defeated Perryville and Affton in PKs in the district tournament and then in the semifinals defeated Principia 1-0 on an early goal within the first 10 minutes.
Crawford noted they were able to win those games because of the maturity and experience of his squad.
“When you look back at our season, there really was a variety of things that took place,” Crawford said. “We had all those overtime and PK games, and then suffered a lot of injuries internally,” Crawford said. “We got hot at the right time and came together. A lot of that stuff ended up helping us to get where we wanted to be. We had some guys in positions that I never would have played them at the start of the season. We were down three starters against Principia and no one gave us a chance. All the guys were mature enough to step into those roles and do it to the best of their ability.”
Saxony will graduate seven seniors from the team and Crawford said each one continued the tradition of the classes before them.
“They were a class that was really affected by the success factor,” Crawford said. “If we were in Class 1 for each of the last three seasons, we likely are in the state tournament each of those years, or at least would come close. We talk about our program being a family and they really bought into that and when you have it, good things happen.”