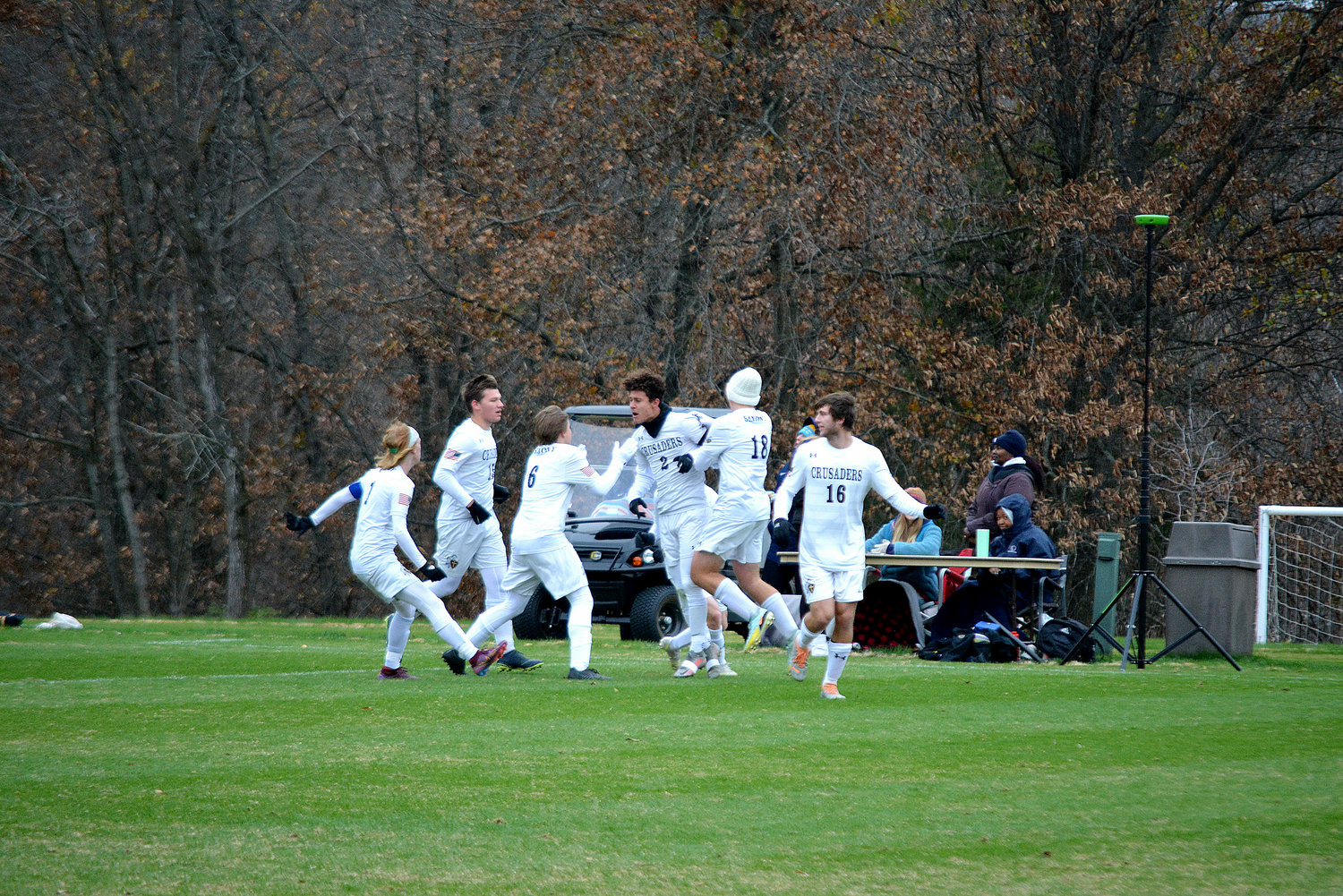 The Saxony Lutheran boys soccer team took the saying “third time is the charm” to extreme levels.
However, Saxony coach Chris Crawford will take it.
The Crusaders allowed an early goal to hold up as they secured a 1-0 victory over Principia in the Class 2 quarterfinals on Saturday. It was the first victory for Saxony Lutheran over Principia in nine tries.
“We knew it was going to be a tough game,” Crawford said. “We watched a ton of film and came up with a gameplan that we knew was going to work. We really took it to them in the first half. It probably should have been about 3-0 at the half, but their goalkeeper made some great saves.”
While Crawford felt like his team missed some chances to put up insurance goals, Max Richey made a shot count just nine minutes into the contest. The Crusaders had to hang on from there.
“We knew that if we could jump on them early we could have a really great chance,” Crawford said.
Crawford felt like his team was able to wear down Principia over the course of the 80-minute contest, especially in the second half.


“In the second half, Principia switched their formation like we thought they would, which caused us to adjust ours. We had a really gritty second half and played tough defense and made sure we did allow any goals. They were chasing us in the first half and that was our gameplan.”
Saxony is no stranger to close games as they went into a pair of shootouts with Perryville and Affton in the district tournament. Crawford feels like his team’s maturity is the difference in winning this postseason.
“I think it speaks to the way the guys take care of their business not only at games, but also at practice,” Crawford said. “There was a time where we weren’t doing anything particularly well Saturday, but we were able to come back together. That really speaks to the level of maturity this team has and the grit they have to come out on top of these games and not really feel the pressure.”
The victory will send Saxony to its first Final Four since 2017 when it was in Class 1. This is the first appearance for the Crusaders in Class 2. Crawford understands the gravity of the situation but was glad his team was able to come out of the game with the victory.
“Any time you get to play in the final four it is an incredible experience,” Crawford said. “It is one that is on the mind of every team at the beginning of the season. There isn’t a team that would not love to be in our position. However, we are not satisfied with just being there. We want to go up there and win.”
Saxony Lutheran (15-9) will get the chance to play for a spot in the Class 2 state championship game when it takes on Orchard Farm (20-5) 2:30 p.m. Friday at the Wide World Technology Soccer Park in Fenton.
Orchard Farm defeated Helias Catholic 3-1 in their Class 2 quarterfinal game and will come into the contest having won nine straight games.
“When you reach the final four every team will be good,” Crawford said. “They are a disciplined team and are quick. They have a Division-I commit in their midfield that is a good player. We are coming up with a gameplan and try to execute it.”