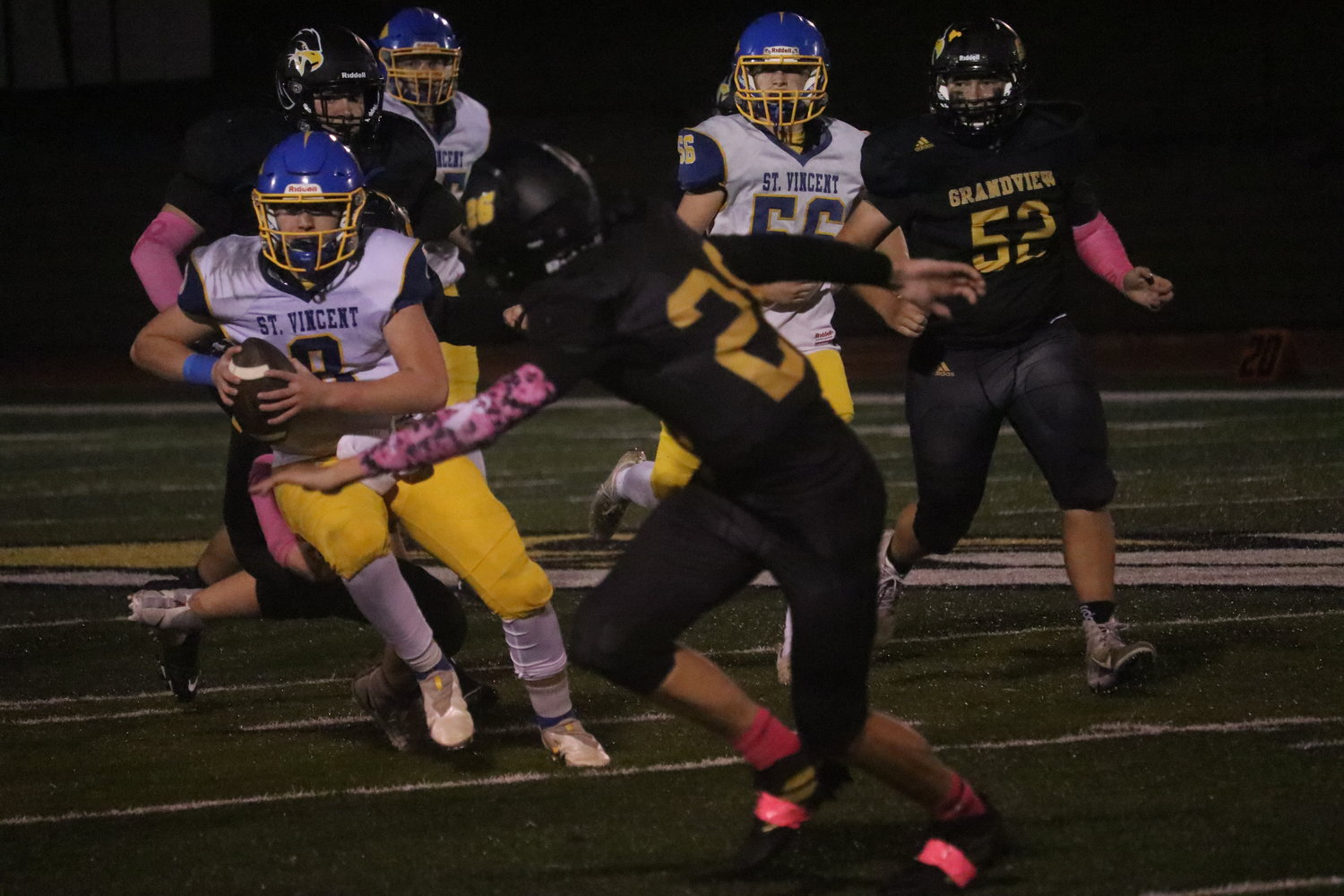 St. Vincent certainly had its chances to get closer to Grandview on Friday night, but every time it seemed they were on the cusp of doing so, something bad would happen. Mistakes and special teams miscues haunted the Indians as they fell 47-25 to Grandview on Oct. 15.
“We had chances,” St. Vincent football coach Tim Schumer said. “Turnovers killed us tonight, turnovers on offense and turnovers on special teams. We gave up a couple on kickoffs when we are trying to mount a comeback. We dug ourselves a bigger hole.”
Couple the turnovers with a much-improved Grandview squad, that scored just 12 points in its previous three matchups with St. Vincent combined, and the Indians found themselves on the wrong side of the outcome.
“Coach Dallas has done a great job here and really turned things around with the Grandview program,” Schumer said.
To see that turnaround, a person would have to look no farther than the rushing attack that gave St. Vincent fits all night. Grandview (5-3) rushed for 316 yards and had 410 total yards in the game. Chase Wilson and Ryan Ruble combined for 199 yards on 36 carries for the Eagles as any time they needed a play, the triple option rushing attack provided it.
“They did a good job of keeping us off balance with their attack, whether that was with the quarterback, fullback or their running backs,” Schumer said. “They did a good job of running to spots where we didn’t have guys there. Our defense did a good job of making stops at times, but we weren’t able to capitalize on those chances.”
Indians quarterback Christian Schaaf — who was under pressure from Grandview’s defensive front all night — threw four interceptions, one of which was picked off by Ryan Ruble in the Eagles’ end zone and returned for a touchdown as the Indians tried to cut the Grandview to 35-32. Schaaf was 19-33 for 292 yards, two touchdowns and four interceptions.
“Christian gave us a chance to win this game,” Schumer said. “He has improved every game this season. I felt like I maybe should have called a different play there, we shot ourselves in the foot too much.”
St. Vincent scored first on a 27-yard run by Evan DeWilde to give a 6-0 lead. The team would go back and forth until Schaaf found Jacob Kapp on a pass for 30 yards and DeWilde cashed in with a 34-yard pass for a score a few plays later. The Eagles led 14-12 with 2:30 left before halftime, but it turned out that the Indians left Grandview too much time. Grandview ran the ball for a two-yard score with 21 seconds left before halftime.
Both teams took advantage of kickoff mistakes early in the second. The Indians scored when they recovered an onside kick to start the second half and Mason Light ran the ball in at the goal line. St. Vincent had an opportunity to score with a short field with 4:46 left in the third, but Schaaf threw an interception right after recovering the kickoff.
St. Vincent will return to the field on Friday against Jefferson R-7 for Indians annual homecoming game. Schumer knows his team is in for a tough game.
“Jefferson is a great team and we need to be ready,” Schumer said. “Homecoming can offer a lot of distractions, and we have to be ready to play in what I think is the most important part, which is the game.”