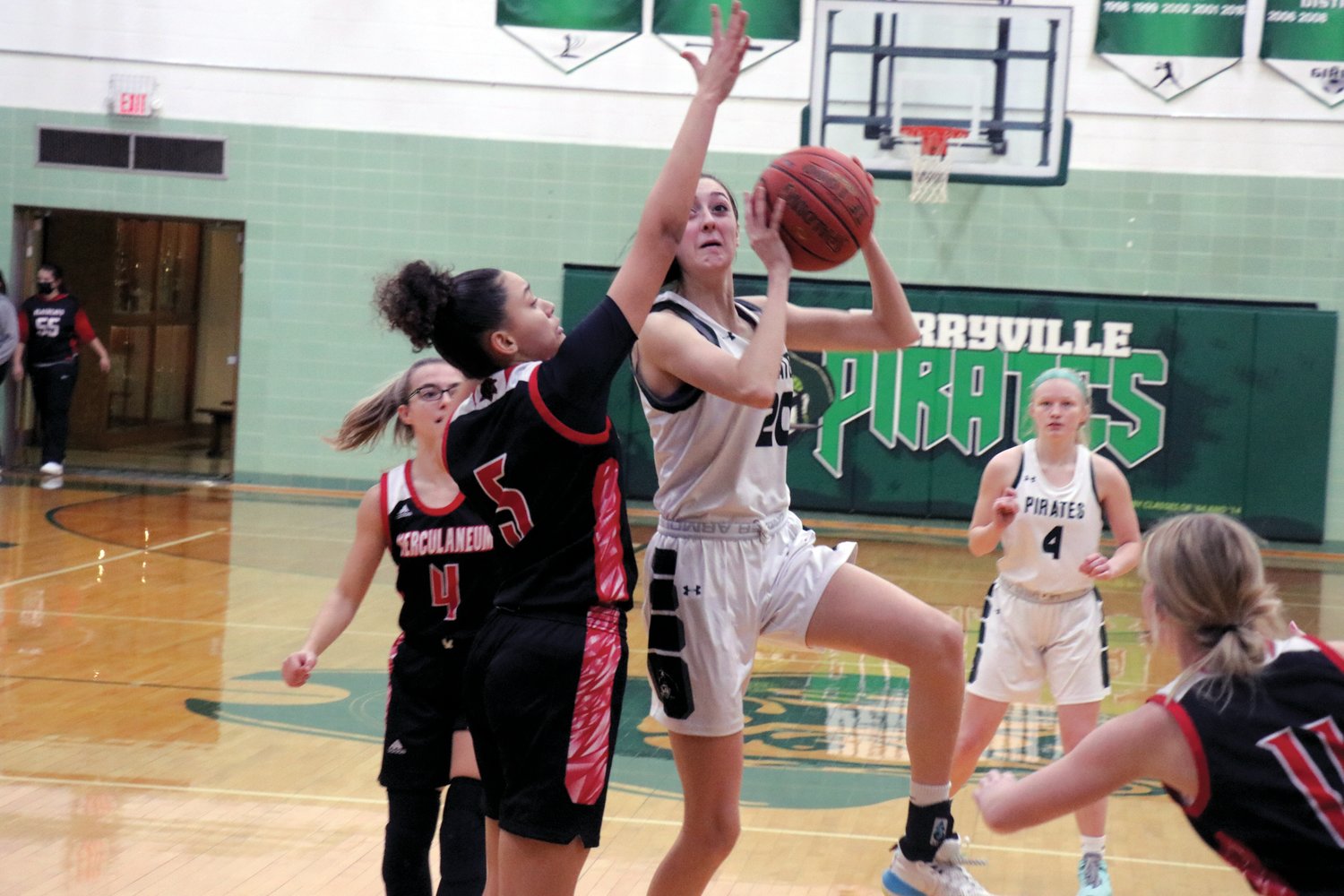 Perryville girls’ basketball coach Angela Fulton has constantly talked to her team about getting off to a good start, at least offensively. Fulton has felt that in most of their losses this season, the team has not performed well in the first quarter.
The message has been heard loud and clear from her squad, evidently.
Perryville jumped out to a double-digit lead in the opening quarter and rode that momentum to a 61-33 victory over Herculaneum Monday in just the Pirates’ second home game of the season.
Herculaneum was missing their leading scorer and rebounder Macey Pillard, who averages 19 points and 12 rebounds per game. Coming into Monday’s contest, Perryville’s main focus was to stop the senior post player.
“If she was here, we wanted to stop that inside game,” Fulton said. “They love to push the ball into the paint, but with her out we were able to extend our defense a little more. Even if she had played, we still felt like we could compete with Herculaneum in this game.”
Perryville took full advantage of Pillard’s absence and got off to a much-needed quick start. Perryville made its first three field goals of the contest, the last being a three-pointer from Ciara Ehlers to put the Pirates ahead 7-0 within the first two minutes of the game.
Perryville continued to build on that lead as Kyla Schnurbusch made several steals and passed the ball ahead to Brooklyn Moll for easy lay-ups.
Perryville led 16-3 after the first quarter, with the only field goal of the opening eight minutes coming on a three-pointer by Kristina Walker six minutes into the contest. Perryville countered with a steal and a three-point play by Moll less than one minute later.
“We have been working on getting off to quick starts,” Fulton said. “In previous games, we have come out slow, so in practice we have preached intensity from the get-go. If we can’t keep that intensity for an entire practice, then we need to get in better shape.”
Moll led the Pirates with 19 points as Perryville had three players total reach double figures and eight players tally at least two points in the game. Rachel Riney added 11 points and Schnurbusch chipped in 10 points. Ciara Ehlers had eight points, including two of Perryville’s three triples on the night.
Herculaneum (4-8) was led by Krysten Britton and MacKenzie Duncan with nine points apiece.
“Just lately, I believe we are coming together as a team,” Fulton said. “We are looking for each other We are playing well defensively and playing hard. We are feeding off each other’s energy and learning how to play with each other. We aren’t there yet but getting closer.”
With Pillard out, Perryville was able to focus more on pressuring the Blackcat guards and hopefully turn that into east baskets.
They certainly did that.
Perryville forced 14 first half turnovers and 21 total for the game as they led 34-11 at halftime.
“The piece that I have focused on since day one since I took this job has been that defense will win games. I’m a big believer in that,” Fulton said. “We got a lot of pressure on the guards and wanted to force them left and for the most part, I think we did that.”
If there is one thing that Fulton took away from the game, it was the start of the fourth quarter. The Blackcats began the quarter on a 10-0 run, to narrow the deficit to 46-26. Katie Clifton ended the run with a putback to get Perryville on the right track once again, but Fulton felt like her team came out a little too comfortable with a decisive lead.
“We tend to look up at the scoreboard sometimes and get a little relaxed,” Fulton said. “I took a timeout and chewed on the girls a little bit. Our intensity dropped a little coming into the fourth, but that can’t happen. We are always trying to stay focused on the job at hand.”
Perryviile (7-5) will have a week off before they return to the court to take on Woodland (5-7) on Jan. 17.
“We will continue to focus on building together as one team and making each other better,” Fulton said. “If we get better every game, then hopefully the wins will follow.”