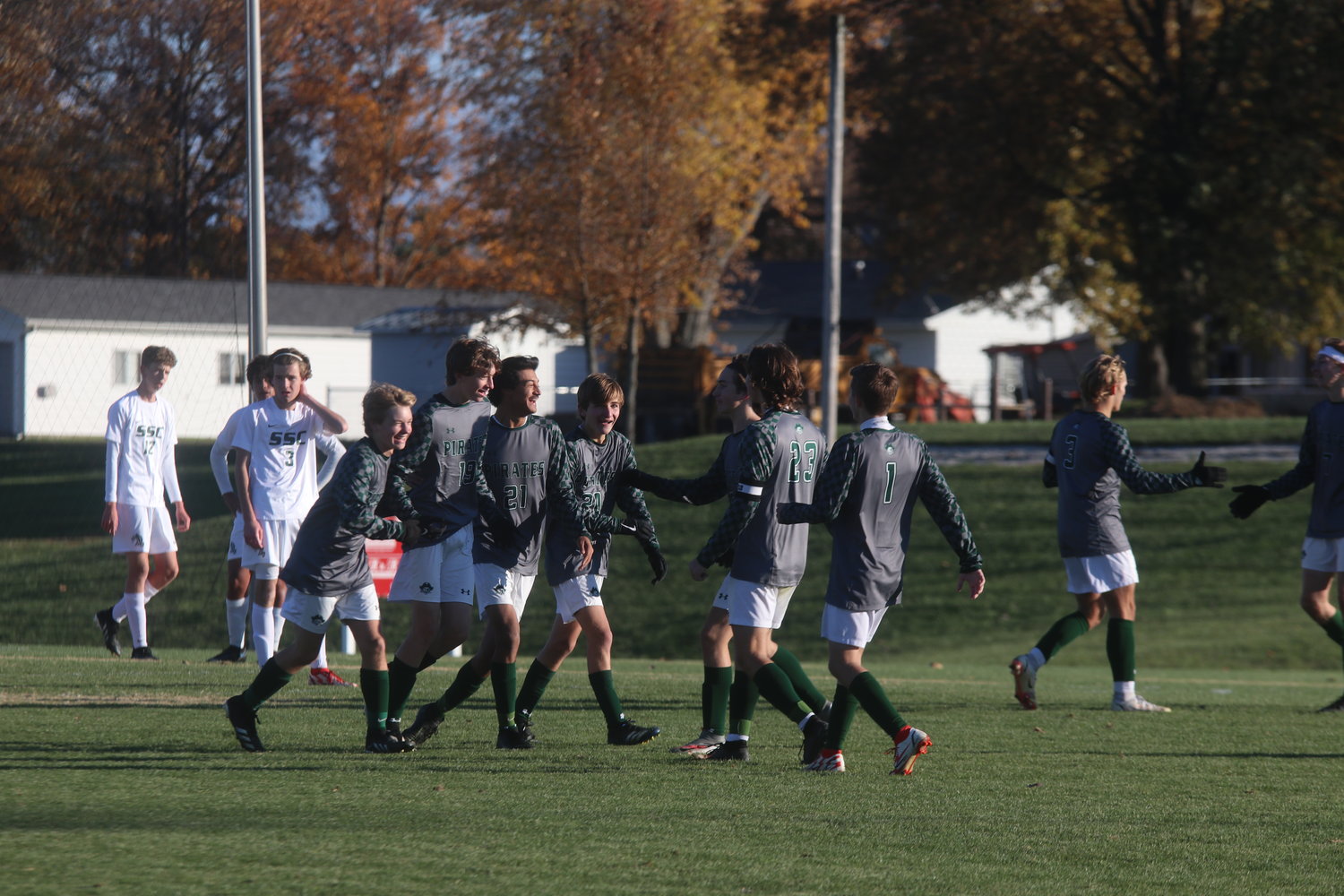 Many of the players on the current Perryville boys’ soccer roster were in class at Perry County Middle School the last time the Pirates reached the Final Four.
They decided that six years was enough of a drought for the program.
The Pirates scored four second half goals in route to a 6-1 victory over St. Mary’s (St. Louis) in the Class 2 quarterfinal Saturday at the Bank of Missouri Soccer Complex. It is the first trip for the Pirates to the final four since 2015 and third overall (2014 and 2015).
“When we were there in 2014, these guys were in the fifth or sixth grade,” Perryville soccer coach Jerry Fulton said. “I’m sure they were all sitting there thinking that when they are in high school they would like to be there. It’s that time now, it’s their time.”
Perryville senior Bryce Brewer led the way for the Pirates with two goals and two assists, while Dayton Strattman added two goals and an assist to pace the offense. Kale Adams and Carter Blechle added one goal apiece, while Stratton Kaempfe, Adam Green and Andrew Welk each contributed one assist. Pirate goalkeeper Ty Baudendistel had three saves.
While the score may have turned into a lopsided decision by the end of 80 minutes, it certainly didn’t start that way. St. Mary’s (11-14-1) controlled much of the first 10 minutes of the game and narrowly missed a goal that slid by the post in the first two minutes. Fulton knew the Dragons would come out fast, judging by last season’s game in the district tournament between these two teams, which St. Mary’s eventually won.
“This is the fifth time we’ve played them in school history, and they always come out hard,” Fulton said. “They are athletic, and we knew if we could withstand that first 10-15 minutes, then the game would be ours.”
The Pirates found their footing and started to possess the ball and it soon resulted in the first goal of the day. The Pirates connected on five passes from midfield and eventually Kaempfe found Strattman to give the Pirates a 1-0 lead in the 20th minute. Brewer found the back of the next just seven minutes later to go up 2-0.
The Dragons would have their moment in the game as they cut the deficit in half with just 32 seconds left in the first half.
“The boys and I were a little disappointed that we gave up that goal right before half and we talked about it,” Fulton said. “We came out and played a superb second half. I would never have dreamed this game would end up being 6-1. That’s amazing.”
However, the Dragons would come out of the break and had the first scoring opportunity. St. Mary’s caught goalkeeper Ty Baudendistel out of the net, dribbled around him and missed a wide open net with a shot.
The Pirates made St. Mary’s pay for the missed opportunity as Brewer scored 45 seconds later to widen the lead to 3-1.
While Strattman and Brewer are well-known for their exploits this season with both seniors having eclipsed the 40-goal plateau. It was a freshman who put stamp on the game about 10 minutes later. Brewer got behind the defense for a breakaway, made the goalie miss, and passed over to Blechle for a shot on a wide-open net. The goal was the first of the season on the varsity level for Blechle, who has contributed a pair of assists this season.
“What a time to get your first goal of the season,” Fulton said. “It’s perfect timing.”
Strattman added a tally and Adams added a goal off a header late for the final margin.
“I thought we did a better job of stepping to the ball in the second half,” Fulton said. “We won a majority of those 50-50 balls that allowed us to possess the ball on our offensive half. That changed the whole game.”
Perryville (22-3) will take on Excelsior Springs (18-5) in the Class 2 semifinals on Friday, Nov. 19 at 2:30 p.m. at the World Wide Technology Soccer Park in Fenton. Excelsior Springs defeated Logan-Rogersville 3-2 in penalty kicks on Saturday.
“We are not going to change a thing,” Fulton said. “Our game has gotten us this far. I don’t want us to be satisfied with just getting there. We are good enough to win the whole thing.”