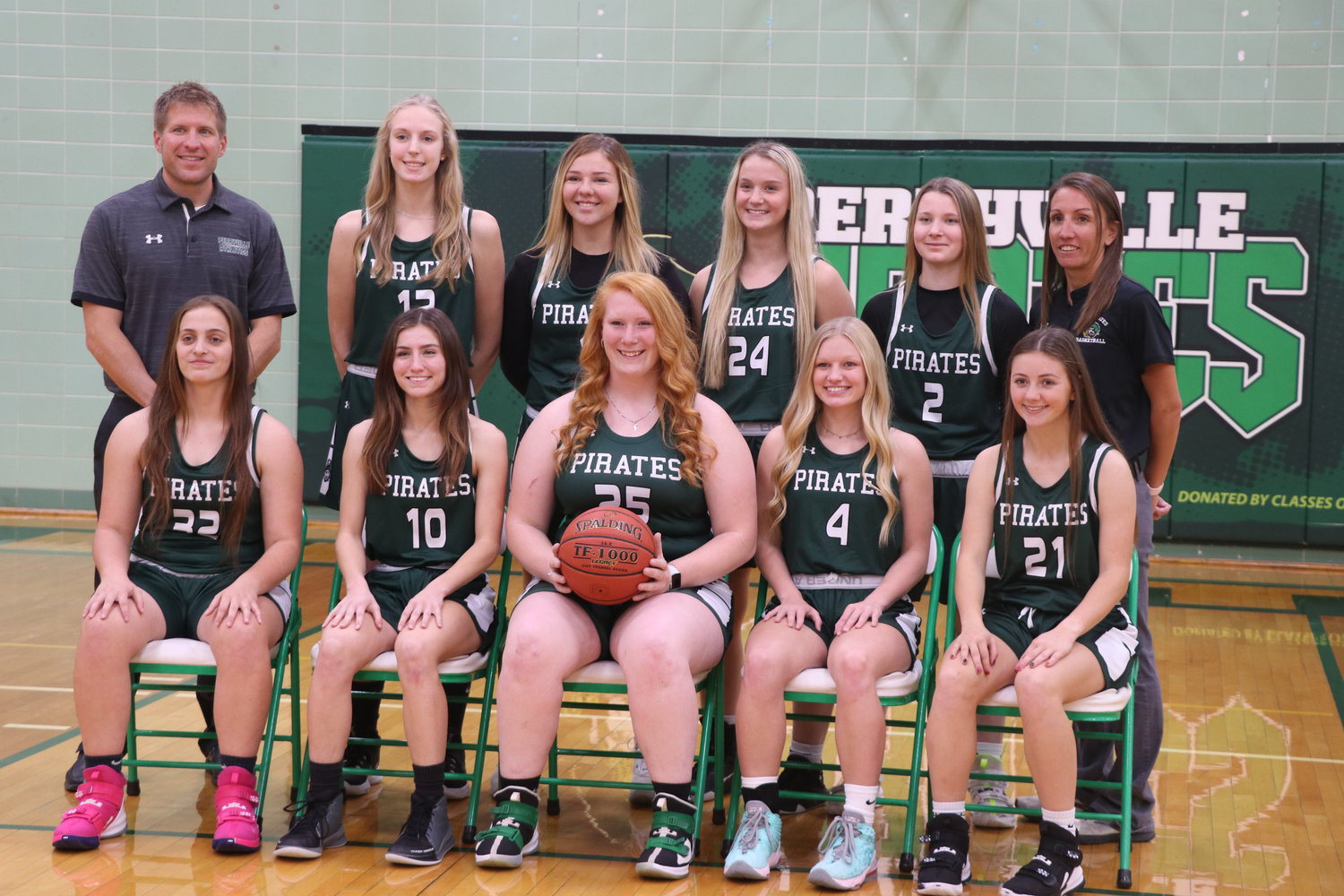 Fans of the Perryville girls basketball team got their first sneak peek at exactly what the team will look like this year on Monday. The Lady Pirates competed in a 36-minute jamboree with Valle Catholic at Perryville High School.
Perryville head coach Angela Fulton said she was taking an overview of what exactly she was looking for during the event.
“I’m looking at all the things we are strong at and all that we need to work on,” Fulton said.
The Pirates came away with the 65-29 “victory” over the Warriors, winning five of the six periods. However, Fulton was not concerned with any of that she was more focused on how her team looked.
“I didn’t even look at the scoreboard,” Fulton said. “I was thinking that we still have to work on this and that.”
Much like previous years, Perryville will take a lot of shots beyond the three-point arc.
“That’s a shocker,” Fulton joked. “We said at the beginning of the year that we are going to get a majority of our points in the paint and at the three-point line. We have never been a program that has shot very many twos. It is who we are, so we are either going to look really good at times or struggle.”
The Pirates struggled to find that range in the third period as they were outscored 10-3, with the only made field goal coming from Brooklyn Moll. The Pirates responded well in the next period outscoring the Warriors 19-7 forcing five turnovers and turning them into easy layups on the offensive end. Perryville was able to put together a 15-2 run in that frame, which is exactly how Fulton will look to win games as she enters her fifth year with Perryville.
“That’s our gameplan,” Fulton said. “We want to push the tempo and get easy buckets off of deflections and steals, then get out in transition.”
While Fulton did see a lot of good things during the jamboree there was one thing that stood out to her, especially when it came to the half-court defense.
“Our ability to box out is still a struggle and then moving over to help side and cutting off our defender are a couple of things that are going to have to key in on before our first game,” Fulton said.
The Perryville will attempt to fix those rebounding problems with senior Aubrey Jung and juniors Rachel Riney and Katie Clifton.
“We have several solid posts,” between those three,” Fulton said. “I need them to rebound and mix it up down there and get us extra possessions.”
All the players that sat on the bench were able to get onto the court, as Fulton tried various lineups, although she did admit that it got a little hectic at times to make sure that everyone had equal paying time.
“I was trying to figure out who has all played and how many minutes and who needs to still get in,” Fulton said. “It did give us a lot of opportunities to figure out our gameplan if we go small or if we have two or three bigs on the floor. It gave us the chance to put ourselves in situations that we may see during the season.”
Brooklyn Moll led the Pirates with 20 points during the event, and Fulton expects a leap from the sophomore this year.
“I see a girl that is starting to have confidence in herself,” Fulton said. “She made a couple of threes and had a few three-point plays. Even though she is a sophomore, but I don’t expect her to play like one. She knows what she is doing she just needs to play up to her potential.”
Perryville will be led at the guard spots by junior Kyla Schnurbusch and senior Ciara Ehlers who both made the JCAA all-conference team last year and averaged 11 points apiece.
“Kyla has a lot of potential and has been putting in a lot of work this offseason,” Fulton said. “Ciara will be our main shooter this year and I have all the faith in the world with these girls. We have a good group.”
Perryville will start the season on Dec. 1 in the Fredericktown Tournament. The No. 4 seed Pirates will take on Naylor.