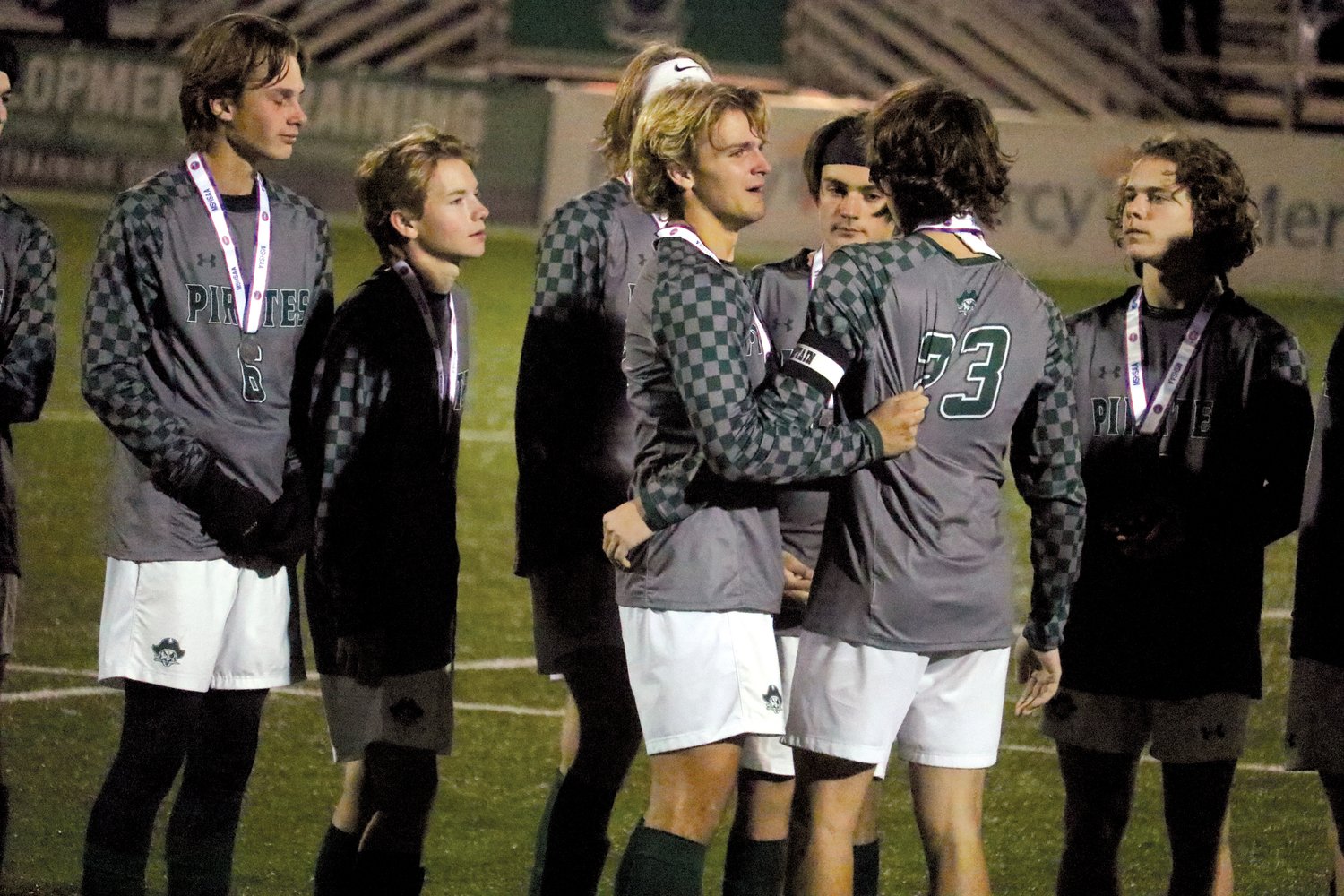 There was disappointment across the Perryville boys soccer team as they walked off the field for the final time in 2021 after falling to Whitfield 4-2 in the Class 2 state championship game Saturday night at the World Wide Technology Soccer Complex in Fenton.
However, despite the loss Perryville coach Jerry Fulton decided to focus on the positives.
“There were plenty of tears and sad faces over on our bench after the game,” Fulton said. “But you can’t take away what these kids did throughout the year. They played together and were like a family all year. You can’t take away what these kids did with a 23-4 record and make it to the championship game after such a long drought to make it back was a great accomplishment. I think we played Whitfield as close as anyone could, especially in Class 2.”
Much like the state semifinal that saw Perryville fall behind 3-0 in the first half, Whitfield scored first just four minutes into the game on a goal by Nolan Schulte after a pass from Micah Norman. The Pirates defense lost Riley Hagan shortly after kickoff with a knee injury.
“I thought that was a big loss because Riley is such a force back there,” Fulton said. “Kaden Laurentius did a fine job back there, but he’s not Riley. When we had to move him over that changed a lot of things in the back.”
The Pirates answered the goal by Whitfield with a goal by Bryce Brewer in the 19th minute to tie the game at 1-1. Whitfield answered back right away to make it 2-1 just 37 seconds later and took that lead into halftime.
“I loved our fight,” Fulton said. “It says a lot about this team that we always seemed to have an answer for whenever they scored. This team had a lot of heart and they proved it again and again over the weekend. I can’t say enough about it. It had never been done before that a team came back from a three-goal deficit to win, but we did that. I do think always having to fight from behind wore on us physically and emotionally. When you have to fight like that and spend so much energy throughout two games, it can certainly wear a team down.”
The Pirates had that answer to start the second half as Andrew Welk scored off a corner kick on a pass from Stratton Kaempfe five minutes into the half to tie the game at 2-2.
Schulte completed the hattrick to put Whitfield ahead 3-2 in the 53rd minute, but Perryville looked to have an answer when Kaempfe beat the Whitfield goalkeeper to the ball and missed the far post by mere inches. Dillion Schlimpert also hit the post in the second half in an attempt to mount yet another comeback.
“That was a big momentum swing because I felt that if we could have tied it at 3-3, we could have won that game,” Fulton said. “If we could have scored both of those chances who knows what could have happened.”
Kaden Anderson put the game away on a header just minutes after Kaempfe’s miss to seal the game in favor of Whitfield.
“Hats off to Whitfield,” Fulton said. “They played well and were a good team. They were better than us yesterday, but that’s not to take away anything that we did over the course of the season.”
The Pirates will graduate six seniors, who for Fulton have become like family to the longtime Perryville coach.
“This is always the hardest part about coaching,” Fulton said about having the seniors walk off the field for the final time as Pirates. “You grow attached to these kids over the four years and they become like kids to me. I have loved every player that has come through this program.”

Class 2 semifinal
Perryville coach Jerry Fulton had a simple question for his team at halftime of the Class 2 state semifinal game against Excelsior Springs.
“I asked the team if that was the way they wanted to go out,” Fulton said. “If it was then don’t do anything, but if we wanted to do something, we needed to start winning the ball.”
Not only did the Pirates start winning the ball, they also started putting the ball into the back of the net. Perryville scored four goals in the final 23 minutes to overcome the three-goal deficit to win 4-3.
Dayton Strattman got the scoring started with a goal in the in the 57th minute and another in the 59th minute to narrow the lead to 3-2.
“At that moment you could just see the heads of the Excelsior Springs team just drop,” Fulton said. “They knew we had all the momentum and we rode it all the way the rest of the game.”
Riley Hagen scored the third goal in the 74th minute on a redirect off a corner and Stratton Kaempfe put the Pirates ahead for good with two minutes remaining in the game.
Excelsior Springs managed a trio of goals in the first half. The first just six minutes into the contest and also converted a penalty kick with 10 minutes left in the first half.
“I have never been a part of a game like that,” Fulton said. “It was amazing.”