Naeger wins in MMA debut by third round TKO 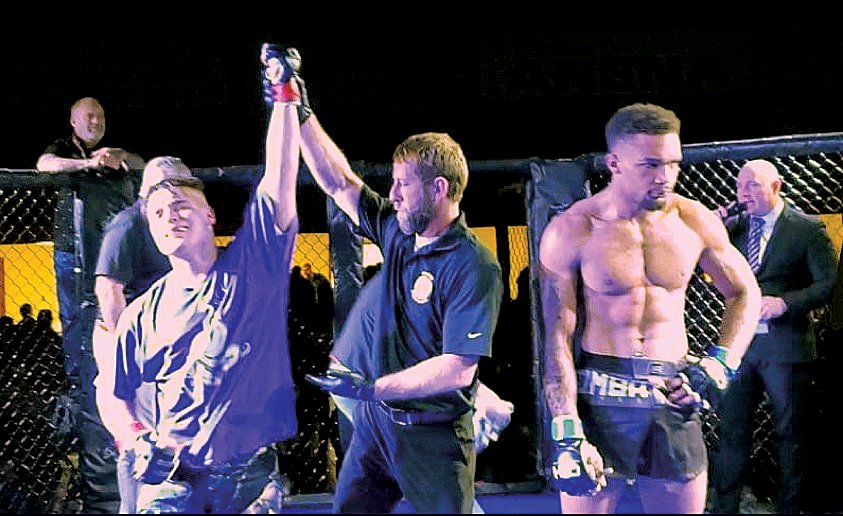 Perryville jiu-jitsu instructor Chad Morrison was probably beaming with pride as he watched one of his students make his MMA debut. Isaac Naeger competed in the Cage of Honor 84 event at the AC Brase Arena in Cape Girardeau Saturday.
“I was the first person from Perry County to compete in an MMA match in 2007 and have been in that realm for the last 14 years. I occasionally have a student that wants to try it and I just use my connections within the MMA circles to get them matched up.”
Naeger did quite well in his debut as he defeated Jayden Ross by TKO in the third round in the 185-pound weight class. Morrison knew that Naeger was ready for such a fight.
“He’s such an extremist,” Morrison said of Naeger. “There isn’t much he can’t do.”
Naeger’s strategy was simple going in.
“I knew his opponent did not grapple well,” Morrison said. “His opponent had more of a striking background, and I wanted to test our martial arts. Almost all fights go to the ground. I knew if he could get in there and get a hold of the guy the fight would be over.”
The thing that Morrison was most pleased with was the victory through a TKO
“The biggest thing I drilled with him is getting him to the ground and maintain a dominant position and control the fight from there. Then he could get him into a submission and if he didn’t want to tap, then he could use strikes and pound him out.”
Morrison almost expected Naeger to walk out as a winner.
“I told him that the only way he loses this fight is if he loses by knockout,” Morrison said. “He is so intense. In the gym he’s one of those guys that everyone does not want to roll with. He is so strong and doesn’t tap so easy. He has a big tolerance for pain and flexible.”
Morrison noted that Naeger has been training with him for two years in Perryville and is growing with each lesson and session.
“He’s a team player and will roll with everybody,” Morrison said. “He doesn’t go out and maul the new students but helps them along. He is everything you look for in an experienced teammate and shows everyone what is going on when we try different things.”
Cage of Honor is a premier event in the Southeast Missouri Area. The card featured 13 fights with nine of them ending in TKO. Naeger was one of four fights that went beyond the third round.
“For Southeast Missouri it was one of the only ones they have,” Morrison said. “When you get up toward St. Louis there are other ones. When you start to build your MMA record you can go into Shamrock FC where I have actually trained fighters.
Morrison noted that Naeger does want to compete again in the future, along with another one of his students. He has confidence in anyone who wants to compete.
“No one outworks my students,” Morrison said