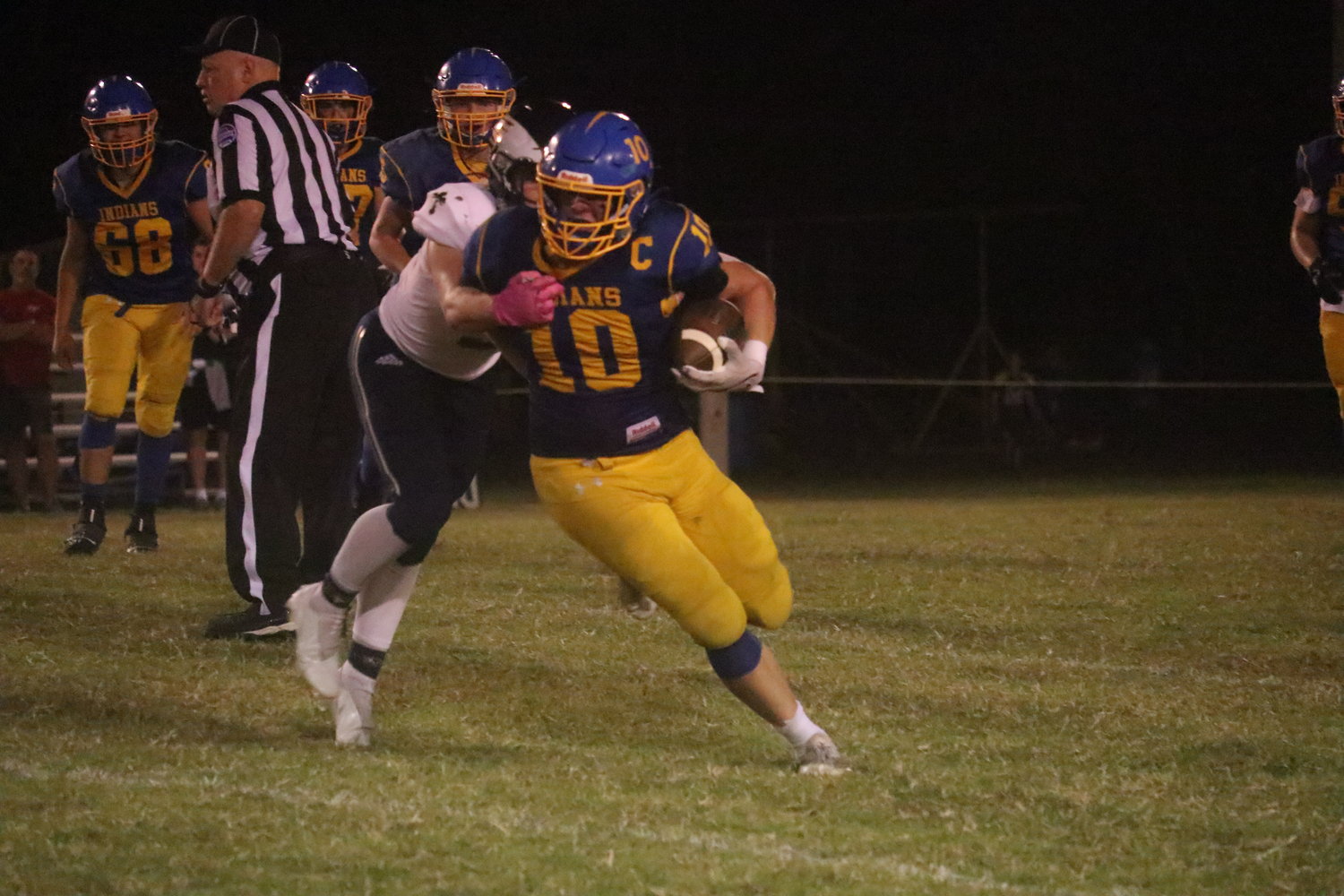 Two yards or six feet. Either way you look at it, that was all that was standing between St. Vincent and certain victory.
However, St. Pius had other plans. The Lancers held off the Indians on the goal line to hand St. Vincent a 20-14 loss on Friday at St. Vincent High School.
“It doesn’t just come down to that,” St. Vincent coach Tim Schumer said. “There was a lot that led up to that drive. We had chances at the end of the first half and couldn’t capitalize and then again at the end of the game. That’s on me as the playcaller I have to get us in the endzone. The players put us in a position to win and be successful.”
Down 20-14, St. Vincent stripped St. Pius quarterback Collin Smith as the ball was recovered by Liam Krauss with just under eight minutes as the Indians took over on their own 25 yard line.
They wouldn’t need that much time as Jacob Kapp caught a pass from Christian Schaaf, broke a tackle and ran 65 yards down to the two-yard line.
However, from there the Lancers held firm and forced the Indian offense backwards. On first down, the Lancers stuffed a run by Mason Light, then forced a three-yard loss on the next play on a run by Schaaf, back to the St. Pius 5.
The Indians went to the air on third down as the St. Pius cornerback made a tackle on Evan DeWilde that lost two yards. The final chance for the Indians was knocked down in the back of the endzone to end the threat.
“The chances were there,” Schumer said. “St. Pius is a good football team and we were able to hang with them for the whole game, even when things didn’t go our way.”
That misfortune took place on the opening drive for the Indians as they were forced to punt, and the snap went over the head of the punter and down to the eight yard line.
The Lancers scored on the next play on a run by Nate Ruble as St. Pius took a 6-0 lead, two minutes into the contest. Ruble led the Lancers with gained 102 yards on 16 carries on the night.
“We gave them points to start the game,” Schumer said. “You can’t make those mistakes against a good team like St. Pius and expect to recover.”
St. Vincent recovered from that incident quite well when Light broke through the line and rumbled down to the 19-yard line for 55 yards.
Schaaf found Light a few plays later down the sideline on third down as the Indians took a 7-6 lead.
St. Pius seemingly always had an answer for St. Vincent, especially Smith.
The mobile quarterback barely converted a fourth down by the nose of the football to the Indian 23 yard line. He made the most of the opportunity with a 14 yard scramble on fourth down, giving St. Pius the 14-7 lead with a successful two-point play. Smith had 10 carries for 90 yards and that one touchdown.
Schumer felt like Smith gave his defense some trouble at times in the game.
“He did a great job of keeping our offense off the field and extending plays and drives,” Schumer said.
The Indians responded with a stop on fourth down and DeWilde picked up a key third down that helped set up a 40 yard touchdown from Schaaf to Kapp to tie the game at 14-14.
St. Vincent had one more chance to put points on the board at the end of the first half. St. Pius’ drive was plagued by penalties, including an illegal pass past the line of scrimmage that negated a 60-yard play that set up an eventual third and 32.
The Indians got the ball back with two minutes left and Trevor Moonier caught a 40-yard pass to the 19 yard line, although the eventual 35 yard field goal was missed to the right as the teams went into halftime tied 14-14.
The Indians tried an onside kick to start the second half, but was unsuccessful and the Lancers started their drive near midfield.
They made the most of the short field as St. Pius picked up a key fourth down and six on a pass from Smith to Drew Marseal to the 11 yard line. Ruble scored what would be the deciding touchdown one play later.
St. Pius held St. Vincent scoreless in the second half.
“They limited our opportunities,” Schumer said. “We only had three or four drives in the second half, we just have to take advantage of those drives.”
St. Vincent (4-3) will travel to Grandview (4-3) Friday. The Eagles fell to Jefferson R-7 49-0 last week, but Schumer is excited to see how his team will respond after the tough loss.
“We’ve had a couple weeks in a row where we haven’t had to face much adversity,” Schumer said. “The guys I have in the locker room will come back, work hard and get back to the grind to be ready for next week.”