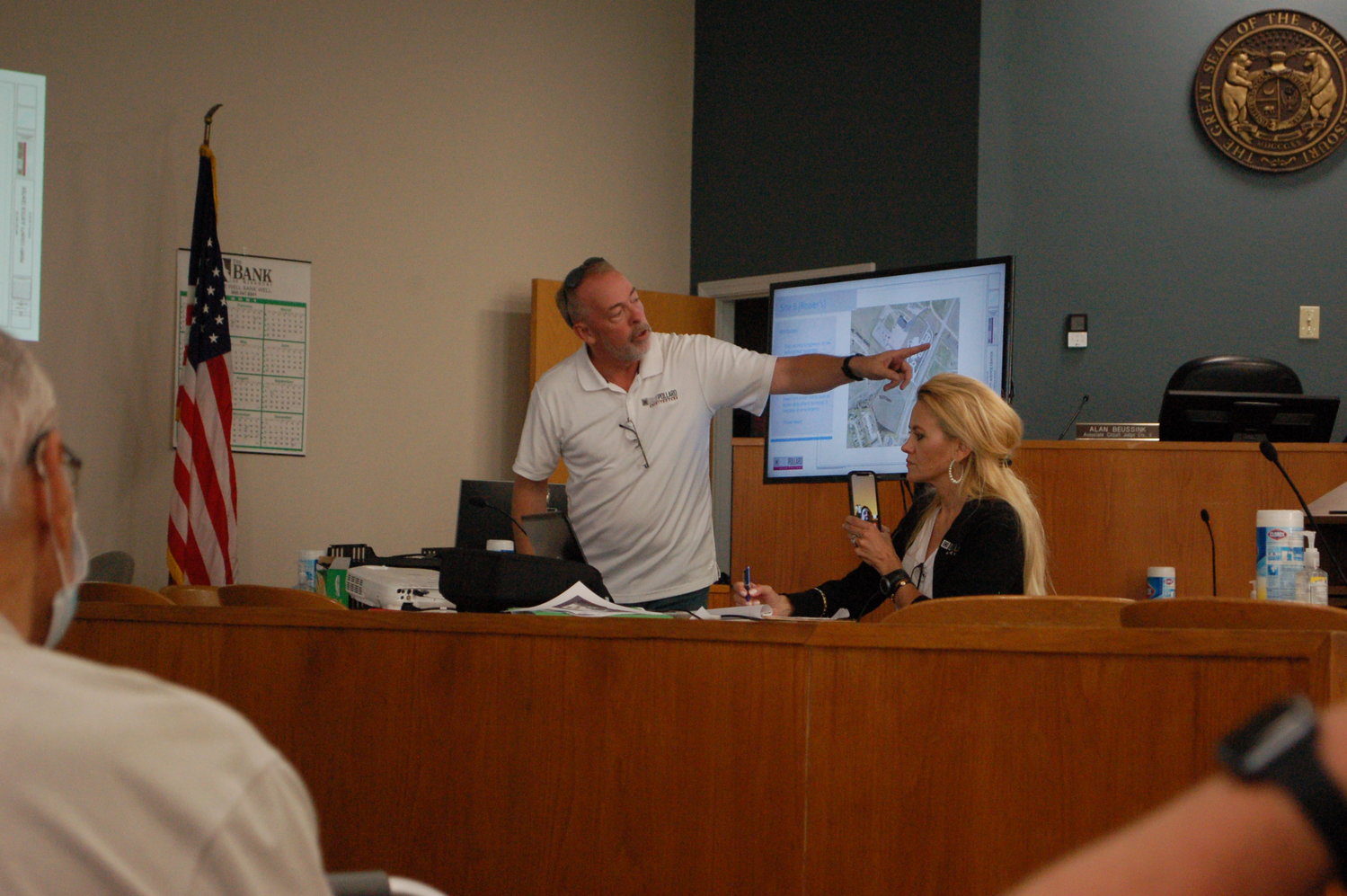 More than 30 people attended a public hearing on possible locations for a joint Perry County and city of Perryville justice center, which took place Sept. 9 in the second floor courtroom.

"We developed a list of 14 objectives that needed to be considered for every site, (which) needed to be scored by all of the stakeholders," Pollard said.

Among the considerations were minimizing development cost, maximizing the project's environmental clean up, accessibility to schools, whether or not a

"The other sites are no longer under consideration for a multitude of reasons," Pollard said.

Pollard then provided pros and cons for each of the properties up for discussion.

First up was a review of site E, the St. Boniface property, which had the best score.

"In the law enforcement business, wherever your building is going to be you have to have more than one way in and out," he said. "The more the merrier. The nice thing about the St. Boniface site is it gives us multiple access points to the site...We have four ways in and out of that site."

It's also the center of population for the city and county.

close to schools as weel as a prime location to continue the development of the downtown area.

"It's shovel ready...you can start building," he said.

Site B, or the Rozier's property on the Highway 51 bypass, is across from the soccer complex and also near what will soon be a new city of Perryville firestation.

It offers easy access, good access for highway responses by law enforcement and is a "visually prominent location," according to Pollard.

It's also shovel ready, he noted, and utilities mostly ready.

Site G, or the Pfaff property, across from Elks Lodge, has the potential for a secondary exit

Utilities are available and it provides good access to highways, though it has limited potential for future expansion.

Jennifer Janet was the first to comment and she asked how many homes properties displaced at the St. Boniface location. Pollard wasn't certain of an answer to that.

Next up was resident Angela Mercer

"There's been rumors of forced buyouts, my property is not in there...I'm concerned about what my property value will be," she said. "This is kind of concerning to me,"

His approach has been geared toward "getting buy-in from everybody."

"It's a $15 million development, I don't know that it's going to hurt your property."

Mercer said it was a police station and there are daycares in the area in that area.

Traffic concerns at St. Boniface site were also raised and how will they be alleviated?

The third person to raise a concern resided at the corner of West North and Magnolia streets.

"Perryville is a very quaint down," she said. "The rendition of the building is very nice. I don't have a problem with it. But when you put a big structure like that close to your quaint down town, it kind of takes away from the personality of Perryville. I like the one on (Highway) 51 obviously more because you have all the new buildings going up out there that are that are large size buildings and it would fit in more. I just feel like, due to the traffic, it's going to be congested and it's going to take away from the quaintness of Perryville."

Janet had additional concerns about emergency vehicle traffic in a residential neighborhood.

"I guess I have problem understanding logistics of how an emergency vehicle...you're in a residential area at potentially high speeds to get to someone quickly which is what they're trained to do and what everyone wants in return, but I just don't see how you're going manage that?"

In more urban areas, such as St. Louis, she said flashing yellow lights are a way to potentially to stop traffic.

There isn't a shoulder on St. Joseph Street, Janet noted.

"What's the plan of action for that, without hurting someone else in the process?" Janet asked.

Emergency vehicle traffic is not what individuals signed up for when they bought a house, Janet said.

Another concern raised was pedestrian safety in a residential neighborhood

Further tests will need conducted on each specific site, according to Pollard.

Prior to any true negotiation or offers, we would do geotech exploration, samples at every site," he said. "Just because it's been vacant doesn't mean there's not something there.

It was also pointed out the St. Boniface location is a flood prone area/sinkholes

Another point raised was when individuals released, are they put in a residential area.

Det. Jason Klaus of the Sheriff's Department responded to this question.

"That does raise a concern with the daycares that are in that area, when somebody bonds out or comes in for fingerprints and leaves on foot that that would be a concern...absolutely, that is the best spot for school response. During the average day, when school is in session, most of your law enforcement officers are at the sheriff's and police departments, from the detectives to the captains, everybody like that. If there would be a school incident, we would be generally responding from the same location."

Another individual said those released from custody now are "released into the city park...Anything's better than that, I think."

Potential for expansion was also brought up.

Another attendee asked who has ultimate decision on the site?

County commission, by statute is charged with providing lands and property. They alone have that responsibility, Pollard noted.

Toward the end of the discussion, the conversation changed to the Highway 51 sites.

"I wanted to kind of avoid the congestion of being in the middle of town, that's one of my prime concerns, but there are other things to consider," Sheriff Gary Schaaf said.

"I know the commissioners were listening to every word that was said tonight..." Pollard said. "Thank you very much for coming out, I appreciate your input. They're your elected officials, you know how to get ahold of them.

County clerk Jared Kutz said there is no "definitive timetable" for the commission to make a decision on the location but added one will be coming "sooner rather than later."

The Perry County Board of Commissioners was scheduled to hold a closed session Thursday, Sept. 16 on the justice center as the discussion is to include contractual details with the design criteria consultant, Kutz said. This will be the first opportunity for the entire commission to be a part of the conversation as presiding commissioner Mike Sauer was absent Monday.

Final three sites up for consideration, with scoring