Fill ‘er up: Historic B-17 stops at airport 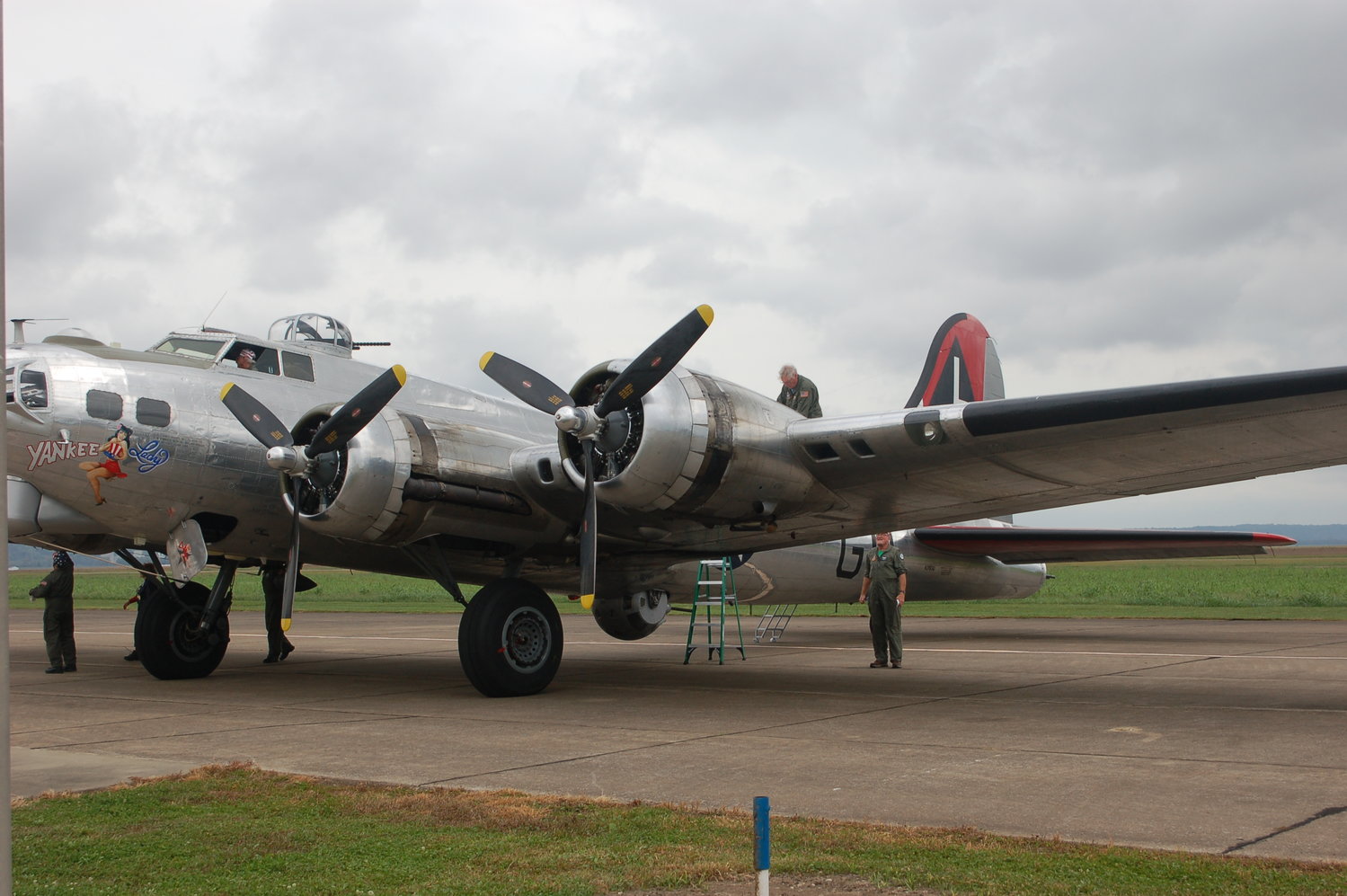 Shortly before 11:30 a.m. last week, a large, historic airplane made a fuel stop at the Perryville Regional Airport as its way to an air show in Tulsa, Okla.
For many, it was an opportunity to view something unique.
Linda Viox of Perryville said it was a chance to see something she hadn’t before.
“We’ve had relatives that were in the service,” she said. “My dad was in World War II, my uncle was in World War II. This is just part of history. We watched one like this on Pearl Harbor. We seen on TV, (but) we never saw it up close.”
The takeaway for Viox, it was rather impressive.
“I never dreamed that it would be this size,” Viox said. “This is our first time being anywhere close to one. With so many relatives of mine being in the service, this is something we definitely try to get to, to more or less pay our respects, of the ones that served in World War II.”
Viox, along with several others, later had the opportunity to take a peek inside the B-17.
Elaine Putvin was one of 11 crew members on the Yankee Lady and this was her first multiple day experience on a plane trip.
Previously, she did a day trip to Muskegon, Mich. as well as an overnight visit to Port Clinton, Ohio. When the opportunity of a 12-day October trip became available, she found a way to make it work.
Putvin works in the gift shop at the Yankee Air Museum in Belleville, Mich. She also spends time as a “Rosie the Riveter” for portions of the museum exhibit.
“I’ll clear my schedule, this sounds more exciting,” she said.
The aircrafts were in service in the 1940s, serving bombing missions in Germany as well as in the Pacific.
“They kind of rotate the jobs, we’ve got several people who can pilot this plane, it’s not easy to fly,” she said.
Thursday morning, the crew filled up with 1,000 gallons of fuel — approximately 250 gallons per tank — before taking off for Tulsa, Okla. for an appearance. The aircraft was scheduled to be part of show in Fort Worth, Texas later in October before returning back to Michigan Oct. 25.
Henry Ford’s plant in Ypsilanti, Mich. produced World War II era aircraft.
“These bombers were equipped with a lot of defense, machine guns,” Putvin said.
When not traveling, the Yankee stationed is stationed at Willow Run, which is near Ypsilanti, Mich. It’s part of fleet of aircraft that belong to the Yankee Air Museum.
The B-17 has a range of nearly 2,000 miles.
“It sparks people’s curiosity in history,” Putvin said. “People can go the way their imagination takes them. Some people get interested in flying, aviation, some people get more interested in other aspects of history and study warfare and things like that. I’m hoping that when people learn more about war they would think maybe peace is a better option. This is part of our history, and important to preserve.”
“I think it’s great, I’ve never seen one this close,” said Sonny Ochs of Perryville
He watched the plane land from a gravel road in front of the runway.
“It fascinates me to see something like this,” he said. “I’ve never seen it with the guns in it and everything.”
Ochs said he saw a B-25 at an air show in Cape Girardeau several years ago. He described how the B-17 sounded as it neared the runway.
“It was really quiet coming in, I saw it before I heard it,” Ochs said. “It was great.”
After fueling up, the aircraft was taxied and the pilot opened the bomb bay. Individuals were then given the opportunity to check out the aircraft’s interior.
The aircraft will be making a return trip to Perryville airport Monday, Oct. 25. It is scheduled to arrive at the airport around noon and will be there at least two hours, possibly longer, according to airport manager Barb Maxwell.
Individuals may enter the aircraft and ask the crew members questions, Maxwell said.