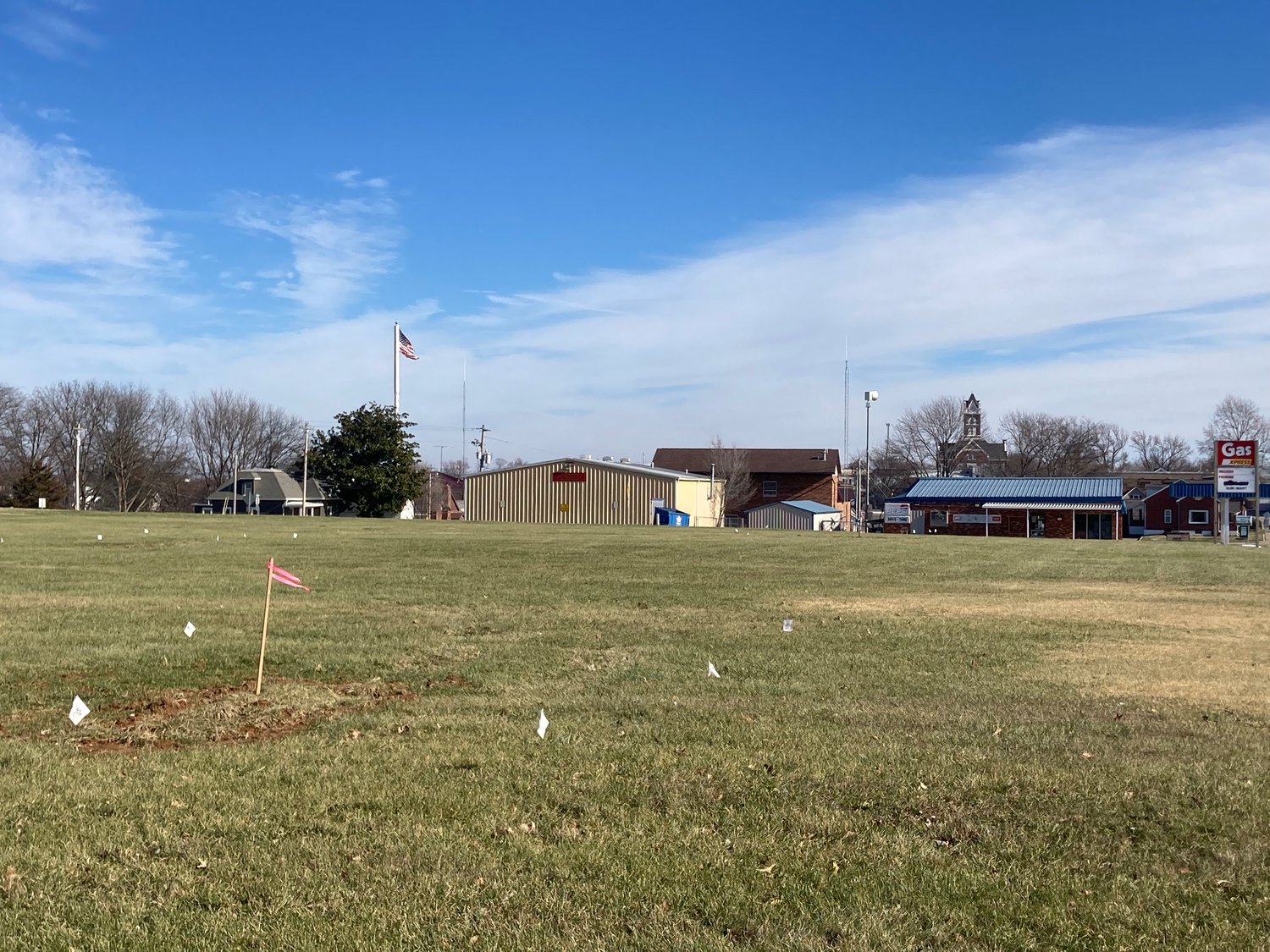 The question of Proposition C.O.P.S. was put on the ballot of December 2020 and county officials are excited to see the process moving forward.
“We’re glad we’ve got it done so we can move forward on the design of the building now,” said Perry County presiding commissioner Mike Sauer.
Asked about the final selection process for the justice center, Sauer said being in a central, close to downtown spot was important.
“That was part of it,” Sauer said. “In looking at all three properties, we listened to a little bit of everything. We took in everybody’s comments, from the (public) meeting and the stuff that people sent in to us and called us about. We looked at the traffic control, so if it was out at the bypass would we have to put a light in to help with traffic, would we have to put a (traffic) light in here (at the St. Boniface site), so that was taken into consideration. We looked at traffic for different times of day. When T.G. lets out, we’ve got a mess of traffic (at the bypass). We looked at entrances and exits, what all of that was going to cost. We looked at response times and then we looked at cost of infrastructure, at all three locations. When it all boiled down to it at the end, the infrastructure for the St. Boniface property here was

a whole lot less than the infrastructure out at the bypass.”
Infrastructure particulars include sewer, water, gas, fiber optics, as well as entrances into property.
Excavating at the old St. Boniface property occurred the week prior to Thanksgiving.
The biggest discovery, according to at least one commissioner, were no surprises.
“There were no contaminants,” said commissioner Jay Wengert.
Beneath the site, it was solid limestone starting from three or four feet, to a maximum depth of 11 to 13 feet in other testing sites.
One feature the new facility is certain to have will be different entrances for the judges and law enforcement officials and the defendants as well as the general public.
“They were using it for a while, but the handicapped entrance comes in the basement,” Sauer said.
The site has been chosen and acquired. Now, the county will continue to work toward checking off additional steps toward the design and construction of the justice center.
Request for proposals or requests for qualifications will be the next step in the process, according to Sauer.
“That’s what we need to get to now,” Sauer said.
After that, get final drawings and get them approved.
Sauer responded to the critics of the chosen location, many of whom showed up for a public hearing back in September.
“I don’t know if they knew all of the stuff we went through before we determined that site,” Sauer said.
Every county department involved in the building was given a voice in the feedback process, according to Sauer.
This included the sheriff’s department, city of Perryville police department, county commissioners, judges, circuit clerk office and prosecuting attorney’s office, Sauer said.
“We’re working on what’s going to go in the courthouse afterward,” Sauer said. “There is still going to be offices in there. We’re looking at moving the archives back to the courthouse.”
“The company we’re dealing with, Navigate (Building Solutions), their design engineers and their expertise, they are saying that’s more than enough space to put this building on,” Sauer said.
Going into the process, the county was looking for between four to seven acres. The St. Boniface site, acquired for $625,000, is 6.65 acres and county officials are optimistic the new facility can be open and functioning as late as 2023.
This location probably will have a basement, according to commissioner Jay Wengert. “That makes a huge difference,” Wengert said, referring to helping with reducing the building’s overall footprint.
“When we add a basement, the footprint of the building can shrink but the total square footage of space needed doesn’t shrink,” Sauer said.
The Perry County Board of Commissioners took a tour of the Cape Girardeau County facility to get a sense of the set-up, how prisoners are transferred in and out.
“That’s really the only place we’ve been,” Sauer said.
“We’ve been looking at a lot of pictures that other companies are showing us,” Sauer said. “Navigate (Building Solutions) has a lot of good ideas.”
Franklin County, Missouri recently used Navigate to assist with a new justice center, noted Kutz.
Also helping in the process along the way has been City of Perryville administrator Brent Buerck has toured justice center facilities in the past couple of years, both in Missouri and Illinois
“Brent in his role travels to a lot more places,” Kutz said. “That was part of his role with us, get pictures and get us ideas or a report on what he was seeing in other places.”

“Navigate (Building Solutions) has worked with counties large, small and everywhere in between. They are experts in what they do and that was part of the reason why they were so critical to us. They have seen this done. What’s being done is not a new concept. It’s exactly what that concept was (pointing to a picture of the courthouse), with the exception of everybody in this building was also in there. This is essentially a courthouse. Unfortunately, all too often, we just see the jail. This is not just a jail. This is a sheriff department, police department, the court system is in there, emergency management offices are in there.

“We have some plans with what’s going to happen to the courthouse,” Kutz said. “What’s critical is that this is so much more than just a jail. I rarely even bring up that the jail is part of this because the public part of this is office space.”

Signage soon
Kutz presented the commissioners with a proposed sign Thursday, Dec. 30, that will be placed at the justice center property, informing the public of plans to build on the 6.6 acre location.
“This is the sign to put at the site for the future joint justice center, to let folks know that’s what is coming,” Kutz said.
The sign, which is still being designed, will likely include a Perry County and City of Perryville logo and details of what will be coming.
While the tax for the new county facility was approved in April, the county started to receive revenue from it in the third quarter, Oct. 1, 2021.
“You can submit the results of an election by the next quarter, which would’ve been July,” Kutz said.
Kutz said the county will be getting access to a great deal of historical documents from the St. Boniface site.
“They have a tremendous amount of historical documents, some of the ones that were provided to us were nearly 180 years old, abstracts and things of that nature that they’ve provided for us,” Kutz said. “I’m particularly excited about this letter
He was referring to a letter from three decades ago sent by the State of Missouri’s Department of Natural Resources after demolition on the site occurred.
“I agree with their conclusion that the site does not represent an asbestos hazard,” wrote environmental specialist Peter Yronwode in the April 1991 letter. “The amount of asbestos they reported is beneath the regulatory minimum, and was probably concealed within the walls of the building until revealed during demolition.”
The site is not a contamination hazard, Kutz reiterated.
“What’s really unique about that is that it matches all of the findings…” Kutz said. “It would have been nice to have that in hand throughout this process because this is a critical element.”
“Thirty years later we got the same result,” said commissioner Jay Wengert.

Keys, door knobs and items of historical note from the previous structures at the St. Boniface site, many which have been donated to auctions, will likely be given to the county, Kutz noted.
“We all love our history and talking about what we can potentially do with the courthouse and partnering with the (Perry County) historical society as we continue to go on in those conversations if that would happen to work out,” Kutz said.
County officials are optimistic about conversations regarding the future use of the existing courthouse, specifically historical documents for an improved archive of records.
“Those would be perfect documents to put in our archive whenever we hopefully have the opportunity to bring our records home and get them back in our courthouse,” Kutz said.
“We’re still going to have offices up there,” Sauer said.
“It’s going to be functional,” Wengert said.
Offices likely to remain at the courthouse, at a different level than where they are now, include the juvenile area, public administrator’s office, as well as recorder of deeds
They will potentially move to the first floor for convenience, according to Kutz.
“Presently, a large chunk of what I would call our more valuable historical documents are housed at the (Perryville) higher education center,” Kutz said. “What’s really awesome about this is we’ve got an opportunity (to get them in the courthouse).”
“This will potentially give us the opportunity to get a better space for our documents,” Kutz said. “Potentially.”
“There are a lot of options there,” Wengert said. “It’s all good, neat stuff to bring more focus to the downtown.”

Collection office
Collection office improvements could be on the table later this year.
“One of the things (Perry County Collector) Rod (Richardet) is going to inquire on is the functioning of his drive through window…” Kutz said.
“Rod was, I think, the only one in state with a drive up window,” Kutz said. “…(A few) took federal monies from the (federal) CARES Act and made drive up windows. Our drive up window is approximately 50 years old. I’ve asked him to inquire about refitting it with new motors or checking out replacement costs.”
“It’s safer, it’s handier, it’s more efficient,” Wengert said.
Possible updates will be considered as part of the 2022 county budget, according to Kutz.