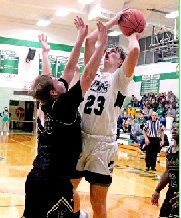 Perryville made the most of its final game at the Chester Invitational Tournament.
Senior Ethan Blythe made sure of it.
Blythe had 30 points to lead Perryville to a 67-62 victory over Valmeyer in the seventh-place game of the 59th annual tournament.
Perryville boys basketball head coach Brett Hale commented after the loss to Chester in the opening round that his team needed to get off to a better start in its games. Perryville fell behind 15-0 to Chester in the opening game, but jumped out to a 23-18 lead after the opening quarter and lead 34-28 lead at the half.
To go with Blythe’s 30 points, the most scored by a Pirate this season, he also grabbed 14 rebounds. Jake Cissell and Andrew Terbrak had 11 points. Grant Smith had eight points and Ben Hotop had six points and six assists.


While Perryville had Blythe go for 30 points, Valmeyer had a player go for more points. Valmeyer’s Harry Miller, who averages 23 points on the year went for 39 points against the Pirates. Miller went 13 for 19 from the field in the game, including 7 for 11 from three-point range. Elijah Miller was the only other Valmeyer player in double figures with 10 points.
The Pirates salvaged a win from the tournament, which saw them fall to Valle Catholic 74-64 and the host Chester 63-33. Perryville (3-13) will travel to Festus on Jan. 20 for its next game.
Valle 74, Perryville 64
The Pirates kept it close, but ultimately fell to the Warriors in the consolation semifinals on Jan. 11. That was despite Perryville having three players in double figures, as Ethan Blythe had 21 points, and nine rebounds, Jake Cissell had 19 points and Andrew Terbrak added 15.
The Pirates shot 53 percent from the field in the game, but was forced into 25 turnovers for the contest.