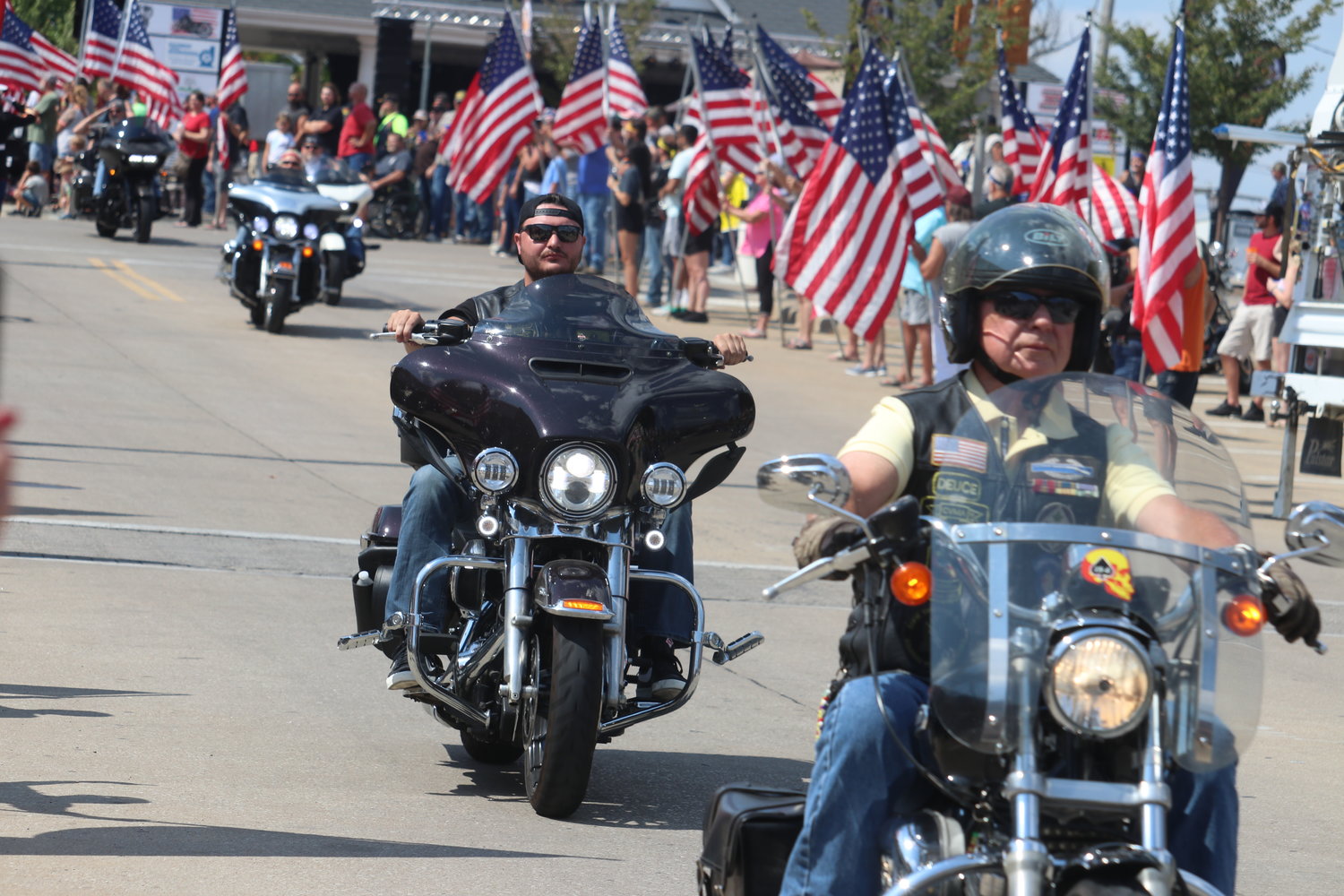 The Bikers on the Square event is through for another year and organizer Robynne Duvall couldn’t be any happier.
“I feel 2022 Bikers on the Square for Veterans was a huge success,” Duvall said.
“We won’t have final figures for a few weeks as we wait for some bills to come
in but preliminary figures look really good. Mother Nature was definitely
shining down on us this weekend.”
The 10th annual bikers event coincided with the Fourth Annual Missouri Vietnam Wall Run sponsored by the Veterans in Defense of Liberty and the Liberty Riders of America and was timed in conjunction with National POW/MIA Recognition Day Sept.16 and the annual Bikers on the Square event in Perryville on Sept. 17.
During the inaugural 2019 Wall Run Program, Governor Mike Parson presented a proclamation recognizing the Vietnam Wall Run as “The Official Annual Ride of Remembrance in Missouri.”
This multi-statewide motorcycle run rode to the veterans’ memorial event and Missouri’s National Veterans Memorial. A ceremony with featured speakers including Col. John Clark, a six-year Vietnam War P.O.W. in the Hanoi Hilton. The keynote speaker was Don “Doc” Ballard, the last living Medal of Honor recipient in Missouri.
As part of that several hundred bikes came through the Perryville Downtown Square on Saturday afternoon. It is one of Duvall’s favorite parts of the event.


“I absolutely love when those bikes come rolling into downtown with the flags
flying all around them,” Duvall said. “The official count for the parade was 437 bikes, while 200-plus were parked around the square. There’s rumor there could have been a few more in the parade as more were still rolling in after our video footage ended.”
She was also proud of the amount of people who attended the event over the course of the two days.
“I really enjoy meeting new people that come to our event.  I met a group of guys that came from Clarksville, Tennessee for Bikers on the Square even though there was a motorcycle event right there in their hometown at the same time,” Duvall said. “The guys said they really liked that our event benefited Veterans as they were all veterans themselves.”
The proceeds from the event will benefit Cape Hope and Missouri’s National Veteran Memorial.
“Both of these locations are a place for veterans and their families to reflect on their commitment to our country’s freedom,” Duvall said.
Duvall and the rest of her committee will begin planning for next year’s event soon.
“When we have our follow-up meeting next month, we’ll get started on plans
for Bikers on the Square for Veterans 2023 which will be held September 15
and 16 in conjunction with National MIA/POW Recognition Day,” she said.